Along The Trail: From the Eyes of a Visitor

Monday evening, I set out for my ride in a very laid back and lazy state of mind. I wanted to see the Two Rivers Bridge with lights on, so planned to be up that way around dark. Just because the Clinton Park Bridge is new, I headed that way to start my ride from Burns Park. The new bridge is pretty cool and definitely has a different feel than the BDB and Two Rivers Bridge. As I slowly made my way across the bridge, stopping to take some photos and admire the views with the rest of the tourists, I decided to ride the entire loop of the River Trail. I wanted to view this ride from the eyes of a visitor intent on riding the River Trail Loop as described in the tourism publications. 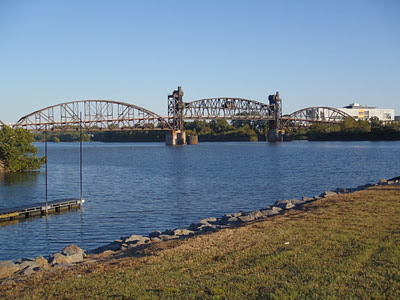 The Clinton Park Bridge, which long ago served the Choctaw Line, is once again open for business. It is a very nice addition to the Clinton Library and to the River Trail system, and should be a boon to commuters using the NLR trail to access downtown Little Rock. 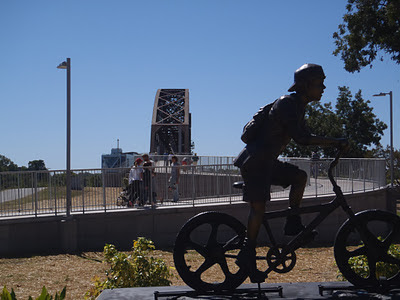 This sculpture is a fitting welcome. 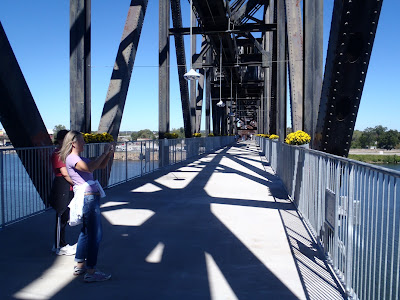 The views are spectacular and the mix of old and new structure on the bridge makes for interesting geometry. The ride down the NLR trail to here is easy to follow and mostly isolated from traffic. That changes at the foot of the new bridge.
After crossing the bridge, I made my way along what I assumed to be the trail as it winds behind the River Market and on to the Medical Mile.   The trail isn't really well marked as it crosses drives and parking lots, but manageable if you have confidence in your general direction. As I made my way out of the River Market, the trail passes under a shady arbor, beneath which two very drunk middle aged guys appeared to be having a domestic dispute as one whirled around a bike on its kickstand in the middle of the path while the other derided him for some offense. Under the Broadway Bridge, the trail passes a food kitchen for the homeless and several dozen folks were lined up for dinner. A block further down and the trail comes to an end. Part of the trail collapsed into the river a couple of years ago and remains impassable. That's of little consequence, because even with the Medical Mile intact riders were simply forced back to Markham Street at the UP RR tracks instead of at Arch Street, as is presently the case. 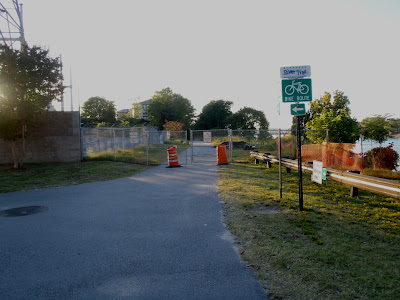 End of the line.
From here, the designated bike route takes Arch to Markham St., then continues on via Cross to the point where riders are forced to cross oncoming traffic lanes and take to the sidewalk, gravel-strewn North Street, more sidewalk, a little misdirection down a one-lane one-way bit of street under the Cantrell viaduct over the UP tracks, and across an often busy parking lot and driveway for Cajun's Wharf before connecting back to designated bike paths and lanes.
I have not really been much of a crusader for completion of the River Trail along what I like to call the Moronic Mile, but my recent loop ride from the eyes of a visitor was a revelation. All I can say is that it's a damn shame that the City of Little Rock can't get it together to complete this now confusing and potentially dangerous gap in our trail system. While our bike advocacy leadership debates how to reel in "rogue cyclists" on the trail, I'm not hearing nearly enough discussion aimed at promoting cycling and pushing Little Rock to carry their share of the trail system. LR got a million dollars from the state several years ago to go toward the project. The recent sales tax initiative was passed. Surely, out of the $500 million that the new tax should generate over the next decade, a way can be found to complete the trail along what is now the "Moronic Mile". 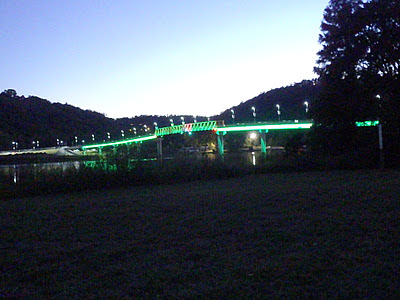 And, yes, the Two Rivers Bridge looks very cool with the new lighting!
Posted by JBar at 12:21 PM

There's no pressure to close "Warren's Folly" as I've named it because the good suit club (the residents of 1 Chamber Plaza and the LR Country Club) deems it unimportant.

When a visiting cyclist gets killed in a traffic mishap due to the routing, LR will probably simply close their side of the trail. Isn't this the usual knee-jerk response?

FWIW, I agree that bicycle advocacy should be more focused on this issue, rather than reigning in "rogue cyclists". "Rogue cyclists" will never be reigned in, just like many cyclists will never come to a stop at stop signs or lights, etc. Also, many pedestrians will always have the view that we are all a nuisance anyway. So, yes, focus on the issue that keeps us safe, not the moving target.

Thanks for pointing this out John, I very seldom make the full loop for this reason.

When I first moved out here I was really impressed with the NLR side of the River Trail, then I ended up on the mess that Little Rock calls the River Trail it's a joke...I honestly laughed when the sign pointed me off of the road onto a sidewalk accross an intersection onto another sidewalk over the railroad bridge...it's not a rivertrail on the Little Rock side just a bunch of bike signs on exsisting sidewalks. I normally just do an out and back on the NLR I never ride the Little Rock side.

How about an annual event like California, where you have a car free day. Popularity keeps growing every year
http://www.ciclavia.org/about/

This why my normal ride has been Cajun's all the way around to NLR Riverfront via the BDB and back. The new bridge will allow me to go all the way to Arch and then turn around so I get more mileage. It's almost a loop...but not quite.

The Dillards won't let us complete the loop argument is stupid and is passed getting old, you have an entire city to complete the loop with there's other options, you have the penny tax now use it. BACA seems like a road block perhaps it's time to start another advocacy group.

As a local cyclist, I don't have any problems navigating the downtown portion of the LR "River" trail, but it sure isn't any fun and not at ALL scenic.

When describing to friends new to cycling how to get from the River Trail at Murray Park to downtown, it usually starts something like, "you have to ride on the road by Alltel/Verizon, turn left onto the trail, go under Cantrell..." but ends with, "oh forget it, just call me when you want to ride it and I'll just come along & show you." Or we have to pull up Google Maps and I have to show them turn-by-turn how to get to the River Market.

It's a shame that with the loop now "closed" that this few mile stretch is what's holding back the enjoyment from riding the ENTIRE loop.

Isn't there a case to be made here for "imminent domain". Oh, wait. That's just when they want to take some poor stiff's property.

We've been butting our heads against a brick wall on that Dillard's/Episcopal corridor for some years now. We're not crowing much about it because there's not a whole lot of good news yet. The plan everyone on the City side has been pushing will run $14 Million in somebody else's money. We think there are better & cheaper options. But believe me, it's on our list

none of this bothers me, i just like driving around with my bike on the back of my Bigfoot truck. Bike Lanes and Paths in Little Rock? what bicycle advocacy needs really need to focus on are cyclist that are faster than me on the rivertrail.

While the businesses and the school and the city administration can be blamed for dithering, it seems to me that the real problem is finding a way across the UP tracks. I have not heard a viable proposal. I ride the full loop only on weekends when there is no traffic in downtown Little Rock. I was raised in NLR and have lived in LR for almost forty years. I am pleased that my first hometown has done so well and chagrined that my hometown for many years cannot find a solution, although I do not have one. I have written jokingly that the best thing to do is ride the NLR trail, cross the Rock Island Clinton Bridge, go for coffee and a monkey bread muffin at Boulevard or a sweet roll at Andina's and double back.