Home Rules for Mountain Biking: No Mud In The House, No Blood On The Furniture, No Whining

My friend Tom Burks said those are his wife's rules for governing his mountain bike activities. It doesn't relate to anything in this article other than the broad subject of mountain biking, but it tickled me and it covers a lot of ground. As a matter of self-interest,  I probably shouldn't have used it here because, on the off chance that Diane will actually read this, it may come back to haunt me!

As has been reported here, I spent much of the winter learning to get along with my mountain bike. I wouldn't call it true love, but we seem to have a growing relationship. Sure, things can be testy at times as I beat the hell out of my bike and it responds by occasionally pitching me unceremoniously into a tree or to the ground. Usually, a tree strike also results in a tumble to the ground, so the bike has the potential to score  doubles. Through the winter, I mostly rode alone so that I could ride at my own pace and let my skills develop and, while I'm still somewhat lacking in technical prowess, I've become confident enough to get out and ride with the CARP boys. 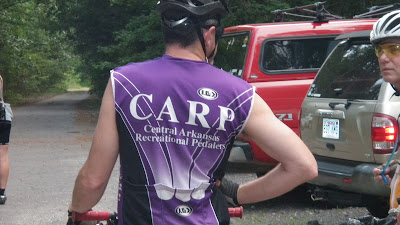 Above: A Central Arkansas Recreational Pedaler
There are many cycling subcultures around town and CARP is one of them. Like most casual entities, the faces change with time, but much of the culture remains fairly constant. The riders meet at Camp on Wednesdays and ride, with the core group gathering at the old parking area and picking up any strays near the Christmas Tree landmark at a set time, which has been 6:15 of late. While most of the group road rides I do are very social, they are also quite competitive. The CARP rides are hard, but group rides on single-track just don't lend themselves to a lot of attacking and positioning, so group seems to easily sort itself out so that the fast riders take to the front and slower riders find their place and nobody feels like they are being pushed or are holding up the pack. It is a congenial and supportive bunch. They welcome anybody who wants to jump in, but I'll suggest that raw beginners might want to get a few miles under their belt. Ride leader Bryan Shipman states something to the effect of, "This is a no-drop ride as long as you can keep up.", but there are regroups after each trail section. 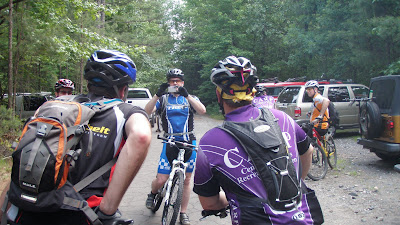 Bryan snapping a photo of  Gary Lamb and our guest from Amsterdam, Gerban (I have no idea if the spelling is correct) 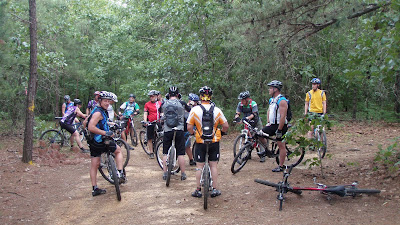 Making the ride plan: Gathered at the Christmas Tree
This past Wednesday, one of the guys brought a guest who was in town from Amsterdam on business. He'd been hooked up with a ti 29er hard-tail by gracious folks at Chainwheel and proceeded to wear eveybody out, or so I hear, since I only saw him at the regroup points. The Netherlands has a huge bike culture and Gerban is a competitive mountain biker. 29er's have yet to hit big in Europe, so he was simutaneously introduced to big wheels, Arkansas heat, ticks, and poison ivy. I think he liked the 29er best from among those things.
Things are a little different for Dutch riders, as he explained that most of the terrain is sandy and the rig of choice is a stiff carbon hard-tail. He also told us that he had guided in an underground limestone quarry that had been opened to mountain biking. I've tried without success to find a link to some photos, but what he described sounded like there were miles of underground galleries. He said that once you knew your way around, the passages and banked walls made for great fun. I guess I'll have to take his word for it!
After the ride, the bunch usually meets the Urban Assault CARP contingent of mountain bike road riders for food and cold beer. I haven't made the post-ride, yet, but I feel it is my duty to attend soon and report!

Hi, Jbar it took 5 years for your post to reach me, but here is a link to the company I used to work.http://aspadventure.nl/.
And I really enjoyed the ride with the CARP crew.