While engaged in a Sunday afternoon bride ride, Diane and I came upon the scene of an accident involving a bicyclist, Tom Ezell, and a compact pickup truck. The incident occurred just before 2:00PM at the intersection of Markham and Arch Street, within sight of the Little Rock Police Department, as Tom prepared to pull away from the traffic light. A motorist in a pickup had stopped behind him and, as the light changed to green, the driver accelerated and simply ran Tom down! Tom was apparently not injured, but was thrown to the pavement in front of the truck. The rear wheel of the bike was under the front left wheel of the truck and the bike was firmly pinned under the front bumper. 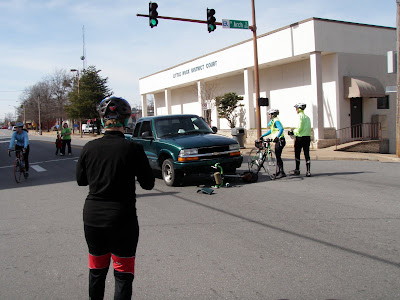 The bike of local cyclist Tom Ezell remained pinned under the small truck that struck it from behind at the intersection of Markham and Arch. We arrived on the scene as Tom was being helped to the curb.
Ironically, Tom is a League Cycling Instructor* and regularly teaches the fine art of riding in traffic to other cyclists. The incident demonstrates the vulnerability of cyclists even when they are doing everything right. Tom was riding in broad daylight, brightly attired and in the company of other highly visible cyclists, on a designated bike route and obeying traffic laws. The driver, on the other hand, will likely suffer from more repercussions than Tom's bumps and bruises. He got out of the truck, asked Tom if he was OK, and then took off on foot. A driver who witnessed the incident followed him until he was apprehended by police in the area of 8th and Broadway. In the cup holders of the truck were a bottle of vodka, an open bottle of daiquiri mix and a cocktail glass, leading us to believe that the driver was probably intoxicated. I heard later (OK, on Fox 16 news) that the driver was charged with careless and prohibited driving and leaving the scene of an injury accident. 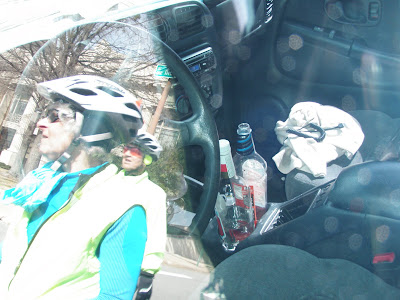 The likely reason for the drivers actions: the console port-a-bar. Tom's riding companions are reflected in the truck window as they direct traffic 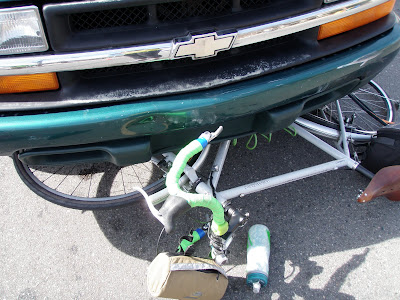 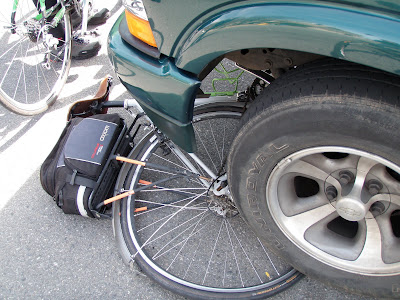 Tom had a close-up of truck tires as he scrambled away, remarkably without apparent injury, though his bike and helmet were trashed. 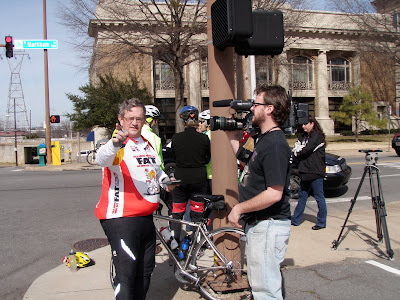 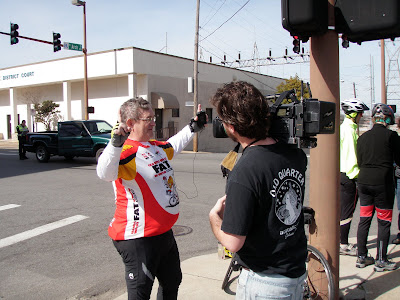 As Tom gets more comfortable with the camera, he regales the newsman with tall tales of a recent fishing trip. I made that up.
I think he's actually describing the distance of the truck's tire from his head. 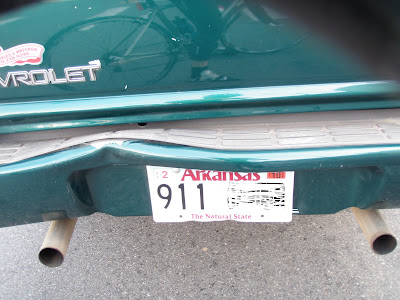 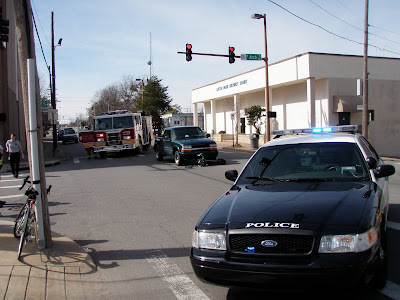 By this time, Tom had been given a quick evaluation by emergency personnel, the ambulance had departed, and the runaway driver had been apprehended. A police officer backed the truck off of Tom's wheel so we could pull the bike out in order to allow the wrecker to tow the truck.
Folks, there is no way to predict or prepare for this kind of driver behavior. All we can do is use caution and wear a helmet. Tom's helmet was broken, so though Tom escaped injury in this incident, that probably would not have been the case if he had not been wearing a helmet.
Be safe.
Posted by JBar at 7:52 PM

Sweet port-a-bar. What an idiot. Glad everyone is ok.

This probably would have all been avoided if the guy was drinking Michelob Ultra instead of vodka!!!!!!

Why the animosity towards fox 16? They have lots of bikers and runners working over there. I didn't see any other stations out covering the story. DJH

Nice informative article. Would liek to post on my site GasfreeCommute.com. email me at info@gasfreecommute.com and let me know.

Not to change the subject (this one is VERY important!) but "mcpsd" made my day with the Michelob Ultra comment. I get way ticked every time I see Lance Armstrong endorsing a lo-cal product! How many calories do you think that guy takes in a day, 4... 6 thousand?!

Dear Anonymous,
Absolutely no anamosity towards Fox 16. They did a very nice report on the incident and their man in the field was quite pleasant. My comments regarding them were typed with a smile...or a smirk..or whatever that expression is that comes right before somebody tells me to quit being such a smartass.

Thanks for all of the comments
JB

I'd have to double-check local statutes, but, generally, fleeing the scene of an accident is a felony, right?

Please, please, please, prosecute this to the fullest extent of the law. Too many such incidents get swept aside in plea bargains, lackadaisical judiciary, etc. I would think that the local luminaries and city leaders would want people to think they're at least safe on designated bikeways, if nowhere else. The Rivertrail, Burns Park and other such amenities are why I moved here. I'm sure others are in a similar position.

Here's the Arkansas statute on hit-and-run with injury, which is how the driver was reportedly charged:

(a)(1) The driver of any vehicle involved in an accident resulting in injury to or death of any person shall immediately stop the vehicle at the scene of the accident, or as close thereto as possible, but shall then immediately return to and in every event shall remain at the scene of the accident until he has fulfilled the requirements of § 27-53-103.

(2) Every such stop shall be made without obstructing traffic more than is necessary.

(3) An accident of this nature shall include all accidents which occur upon the streets or highways, upon the parking area of private business establishments, or elsewhere throughout the state.

I'm relieved that Tom came out OK and also that the hit and run driver was apprehendfed. I agree with the comment about animosity toward Fox TV. I strongly disagree withmany of the national commentators on Fox, but I had an excellent experience with Channel 25 in Boston in working with me on a segment about problems with discount-store bicycles. This issue, and tom Ezell's traffic-safety issue, are not national, partisan political issues. Don't turn away allies, welcome them. -- John Allen, League Cycling instructor, and member of the League of American Bicyclists Board of Directors, 2003-2009.