In Case You Wondered....

The roads are slowly becoming clear of snow and ice, but the frozen stuff still lurks. I had to make a trip to the North Shore Park on business this afternoon and decided to check out conditions on the BDB in anticipation of weekend rides. The picture tells it. 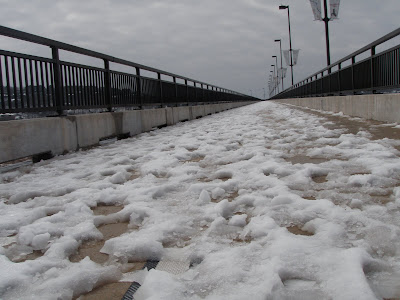 OK, things were not quite good-to-go as of about 2:00PM Friday.
Sooo...... I realized that sunset has crept out to about 6:00, so I threw the mountain bike in the truck and headed out to Camp Robinson for an hour on the trail. Probably not one of my better ideas, but what the hell? Of course, nobody had signed in for like four days and I was alone as usual. That should be a sign, but I headed out anyway. We'd had a big time rolling in a couple of inches of slushy snow a couple of weeks ago, but this was a whole 'nother level. In places where the sun had hit the trail, the track was fairly well clear of snow, but it was mostly crusty snow, poor traction and in places that had any shade, like every hill I tried to ride, the snow was still very deep.  I did a little hike-a-bike, fell once, but managed to ride Yucca, Airport and Ten Bridges. It was nice being in the woods, but I was glad to get out before dark, as it was slow going! 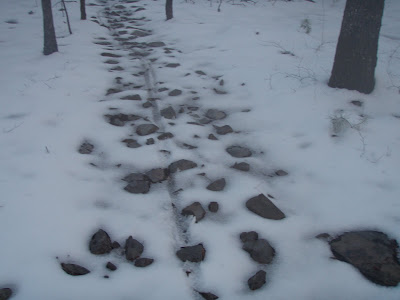 It was easy to see the rock gardens. 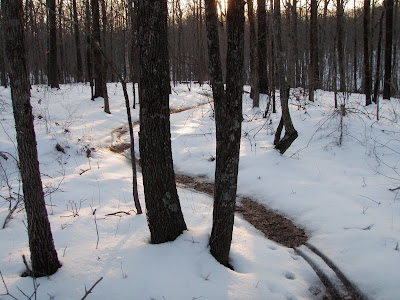 This was the look of the better stretches of trail. 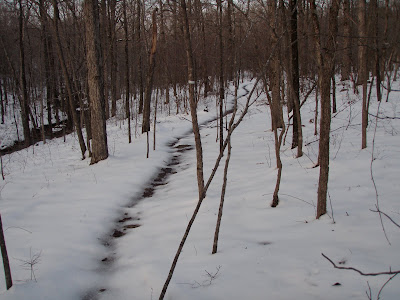 This section of Airport Loop was fairly typical. Most of the trails at Camp have a solid bottom, but things were pretty slick. I got off-trail a few times to avoid downed limbs or water features, but the deep snow stalled me more times than not.
We've all got a little cabin fever, so I'm jumping on a midmorning road ride tomorrow. Get out and play. You're looking a little pale.
Posted by JBar at 10:14 PM