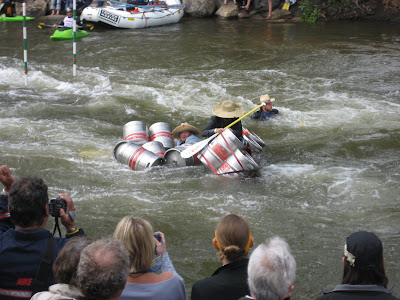 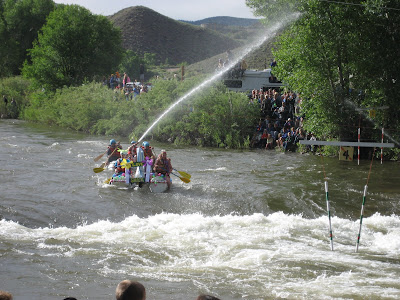 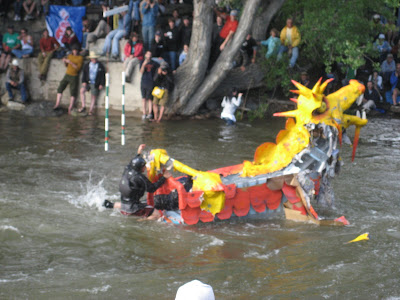 Well, we had a blast in Colorado. Though we didn't ride much (one road ride, one mtb), we got to do some great boating on the Arkansas River in the Salida/Buena Vista area and enjoyed the FIBArk festival.
http://www.fibark.net/
This is the 61st year of what started as a bet about racing down the raging rapids of the Arkansas, then became an annual down river race and has now evolved into one of the biggest whitewater events around. All of the major industry folks have booths there, many of them with sponsored pro riders on site participating in white water rodeo, slalom and down river races.

One of our favorite events is the Hooligan Race. There are no rules, but rafts are to be built from anything "not intended to float". If you use a real raft or boat, you will be ridiculed. Salida has a whitewater park on the Arkansas right downtown and there are some really nice, big holes (a big breaking standing waves designed to allow rodeo boaters to get in and surf while doing a variety of tricks). The problem for the Hooligan racers is that they have to get home made crap of boats through the hole and then avoid the piling of the F Street Bridge 60 yards downstream. They seldom do both. Many fall apart before the hole, like the beer keg and nylon strap model shown above. Next are two of the better contrivances, a dragon,which turned over, but was righted just in time to crash into the bridge, and a load of firemen with a gas powered pump on board, hosing the crowd.
They always have a hot band for a headliner, in this case, Lez Zeppelin, an all-girl cover band.
Posted by JBar at 10:02 PM