Most local riders know by now that the Arkansas River is raging from recent heavy rains and that much of the River Trail is impassable or inaccessible. I probed around Burns park on my mountain bike Wednesday night. The "high ground" trails at Burns were in very good shape and the flat stuff is sloppy. I met Mike Collier for a road ride from the sub on Thursday. The river was as high as I had ever seen it on Wednesday, but we found it to be even higher on Thursday. I haven't made it to the BDB, but the word is that the gates are full open. We figured that we could at least ride from the sub to Burns Park without issue, but trouble started early. Here are a few photos from Thursday: 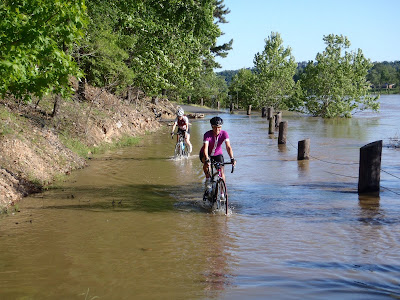 When we got to this stretch near the quarry, Mike plowed on through, so I followed, completely soaking my shoes very early in the ride. These riders, Lisa and Alyssa (or so they told us!), followed shortly. Alyssa had a better plan than I did, as she did a one-legged ratchet pedal stroke to keep her feet out of the water. 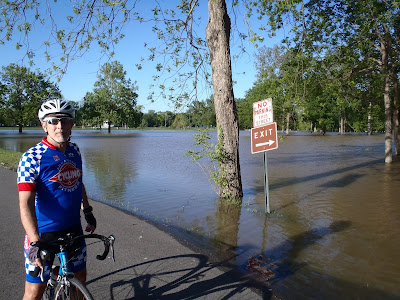 We hit dead end after dead end. The soccer fields were almost all submerged, as were the roads and the trail. 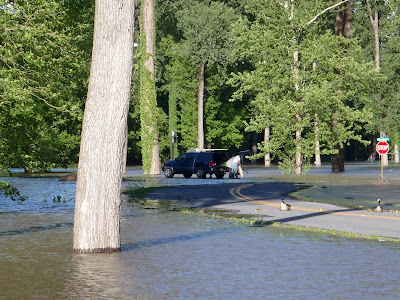 Not everybody is upset about flooding in the park. These bow fishermen landed a big carp as we watched. I can only assume that they drove in on the River Trail from Cook's Landing. The Burns Park gates were all locked.
We finished our tour by riding from Burns Park back to the sub via Levy and Main Street. A little more traffic but a lot less water! We'll be dealing with this for awhile, so stay on top of conditions as you plan your rides.
Posted by JBar at 10:37 PM

Make sure you remove your tires, dry/clean off your tubes and dry out your rims after that. Water in your rims can cause all kind of nasty corrosion on spoke nipples and rim eyelets. To say nothing of what happens if your hubs or BB get submerged...

Yep. The bb got a dunk, so the cranks get pulled!

Fun post. Spent the day "exploring the area myself."