If the glorious weather hasn't been enough of a sign, here is proof positive: 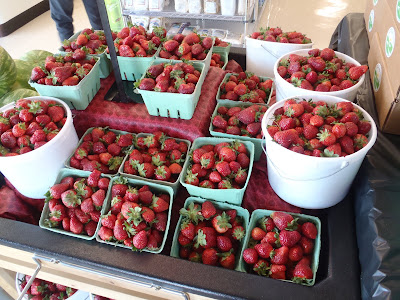 Yes! Local Arkansas strawberries have appeared at the Argenta Market and I can vouch for the fact that they are sugar-sweet and delicious!!
I dropped by for lunch and to get some berries on Tuesday and found things hopping at the Market. Channel 7 had a camera crew filming for an upcoming feature, the Pulaski Tech Culinary Academy was holding a food identification field trip, and the lunch crowd was lined up as usual. 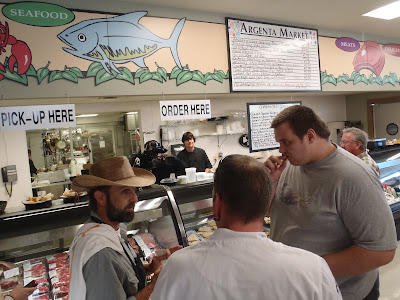 Jody Hardin sharing a bite of something tasty with folks from the Culinary Academy
as the Channel 7 crew films CPA Bruce Engstrom ordering his lunch. Meat Master Cody is behind the counter.
I love the feel of the Argenta Market. They have the best meat I've found in town, the produce is always good, and local products are used to the extent that the season allows. The lunch is tasty, varied, and served up by a congenial crew. Check it out if you have yet to try it! 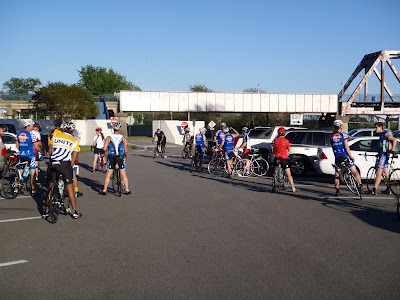 The Tuesday night ACF ride was getting ready to roll
The River Trail and BDB were packed with folks on Tuesday and Wednesday nights. On Tuesday, the ACF ride, Fast Girls, and Tuesday Nitro group rides were all out in full force﻿, in addition to the skaters, walkers, and runners. Trail use, and cycling in particular, is growing rapidly, making it all the more important that we all respect each other and share the resource. The Two Rivers Bridge will open many more easily accessible miles of trail, so that should help.
Cleaning Up The Poo 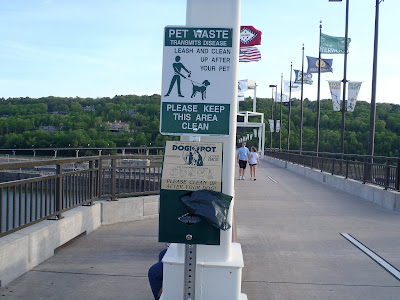 It appears that dog owners are finally responding to the call to pick up behind their pooches. Thanks to Pulaski County for adding more bag dispensers, signs, and trash bins on top of the bridge and to Nancy Elliott, who has been spending her evenings handing out bags, gathering signatures against a dog ban and, most importantly, nicely informing folks that the privilege of walking dogs on the BDB is threatened. I'm not sure how much difference Nancy's presence made, but it's nice to see somebody take it upon themselves to help solve a community problem in a civil and positive way.
Posted by JBar at 8:49 PM