Due to weather, travel, work and injury, I have fallen woefully behind in my efforts to provide information about the major projects underway along the trail. I'll admit to having had to rely on local mass media instead of my preferred jobsite visits and conversations with informed individuals, but I'm still asked about the state of things, so here's an effort at catching up.
The most optimistic date for completion of the Two Rivers Bridge has come and gone, as will soon be the forecast of May1 as made by Judge Buddy Villines at the opening of Spokes back in January. Cold weather halted the pouring of concrete, slowing progress to a crawl. Within the last couple of weeks I've heard an early July estimate and, most recently, mention of an August opening to coincide with the opening of the Clinton Park Bridge. While we're on the topic of the Clinton Park Bridge, I must say that there is very little buzz about it within the riding community in comparison to the interest in the Two Rivers Bridge or the excitement that preceded the opening of the Big Dam Bridge. It will be nice, but does not represent the kind of riding opportunities that will be created by Two Rivers. I wonder, will the Clinton Park Bridge become the CPB? CPB just doesn't roll off the tongue like BDB, so that remains to be seen.

BDB West Approach
A reliable rumor monger tells me that bids for the west approach to the BDB will be let in the next couple of weeks. The result will be more room on the bridge and an easy flow of traffic to and from plaza area at Two Rivers Bridge. Folks, when I recall the plans for Two Rivers Park, I can only say that we will have a spectacular world-class chain of parks, trails and bike/pedestrian infrastructure that will run from the CPB to Pinnacle Mountain State Park.

No Shit. And now we're serious....
Irresponsible dog owners have been advised, encouraged, warned and threatened with a dog ban if they can't learn to pick up after their pooches. Now, Pulaski County is giving them one last chance and taking a direct approach to education. Last Saturday, Officer Dixon of Pulaski County Animal Services was posted at top of the BDB on the Little Rock side, informing and encouraging dog walkers, but prepared to write tickets. 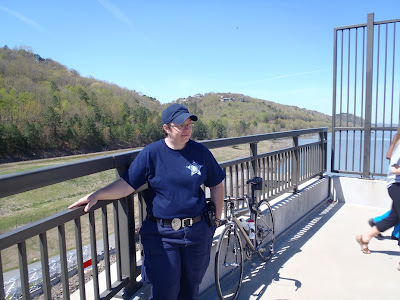 Officer Dixon said that dog owners were taking care of business last Saturday on the BDB.
Judge Villines has let it be known that dogs will be banned from the BDB, Two Rivers and the Clinton Park Bridge if folks don't pick up after their mutts. Along with more visible signage and a lot of publicity, which should be enough to raise the awareness of the most simple among us, a bit of enforcement may be seen as one last warning to the inconsiderate.
Folks, nobody really likes to pick up after their dog, but if you're going to take them to densely populated public areas, you just have to buck up. In our household, we were spoiled by a couple of dogs that were hard-pressed to do their business while on a leash, but Willie dog seems to save up for his walk and prefers the most pristine lawns he runs across, so I've become accustomed to the chore of picking up after him. It's just a matter of respecting your neighbors.
Posted by JBar at 10:52 PM

CPB will be nice so you can bypass the Junction Bridge. Nothing like the smell of poop or pee when you use the elevator on Junction, that is when it is working.

The bike traffic on BDB and the River Trail is already heavy and when Two Rivers opens it will get even more so. The folks that drive out in the Maumelle Park, Pinnacle and Two Rivers area will probably see a huge increase in cyclists.