Well, Congratulations to Scott Penrod, Sean Clancy, Sid Degarmo and the rest of the C.A.R.V.E. leadership on a very successful party and membership event. The Burns Park Hospitality House was roaring as local riders enjoyed a few beverages, heard about a whole bevy of group rides, saw the new team kit and enjoyed some drawings and a comical crit that saw Keith Moore dropped by a young rider who seemed very focused on the prize of a $200.00 Chainwheel store credit. 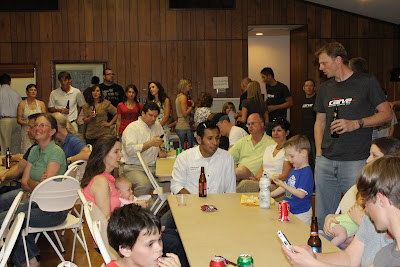 It was a full house at the CARVE kick off party. 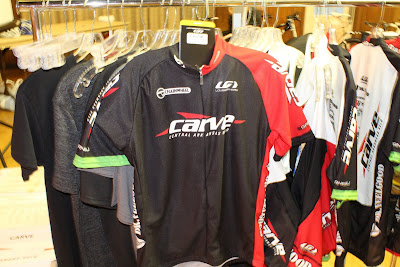 The new kit is sharp, but I question the practicality of the current trend that favors black. In what I suppose to be a tip to Arkansas summers,the back of the CARVE jersey is mostly white, so as to be less of a solar heat collector.
For the grand prize of $200.00 store credit, two riders were selected by a drawing. They were then challenged to don CARVE kit and complete two laps around the room on the bikes supplied. 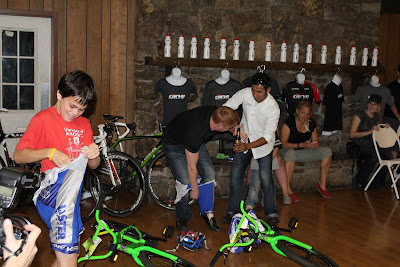 Keith got a bit of interference from the evil Ernie. 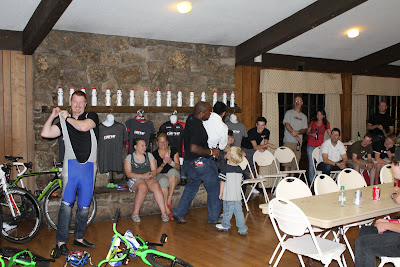 The "Ernie problem" was solved as Chris Randle scooped the little fella up and removed him from the scene, leaving Keith to finish getting kitted up. 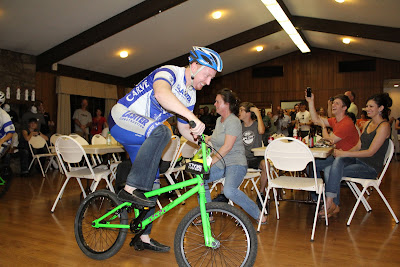 A ReTul bike fit session may be in order, as Keith still
had a little trouble getting up to speed. 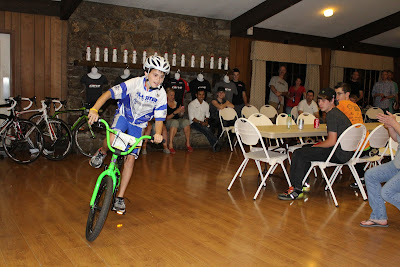 His rival had no such problems as he rolled to an easy win. 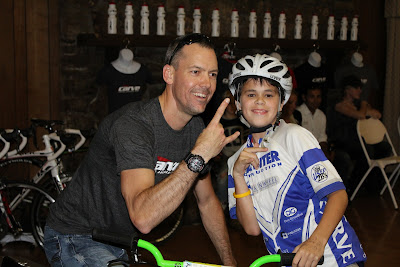 Scott Penrod congratulates the winner, who then headed directly to Chainwheel's Pat Barron with the question, "Do you have my money?" Ahh...young people do have a penchant for immediate gratification!
If attendance was any indication, the effort to revive CARVE will be a succesful one. The club has always been closely associated with Chainwheel and Chainwheel remains a key sponsor, but one of the goals of the refreshed organization is to be a more inclusive﻿ member of the cycling community. Announced plans include a good many regular rides and special events for cyclists ranging from beginners to the elite racer types. Look for more information at the CARVE site.
Posted by JBar at 8:08 AM