Paris-Roubaix: The Hell Of The North

If you find that watching bike races on television to be a sleep inducement and even if you'd rather mow your lawn on a hot July day in Arkansas than watch another sprint stage of the Tour de France (depart, all day break, break caught inside 5K, Cavendish wins sprint; repeat), then I challenge you to set your DVR for Sunday afternoon to catch the Versus broadcast of Paris-Roubaix. It will be a recap, but should be worth your time. Paris-Roubaix is a festival of two-wheeled brutality in which cycles and cyclists are subject to a series of beatings on stretches of cobblestones that in no way resemble my conventional idea of cobblestones. The pave more closely resembles loaf sized boulders poorly laid on narrow lanes. 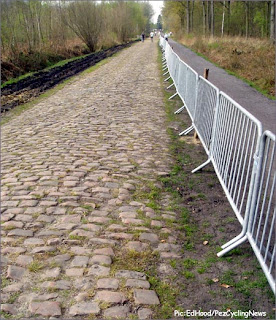 Photo from Pez Cycling News. Follow the link for a good article and more definitive photos.
When it's dry, it is dusty, when it rains, well, when it rains, all hell breaks loose. There are two preferred lines, either you ride the crown of the road or you ride in the gutters and you had better be close to the front. Bikes are equipped with fat tires, double-wrapped bars, longer forks and chainstays, aluminum bars and heavy-duty everything. There have been 'cross bikes and suspensions employed to help survive the cobbles but at the end of the day, only the strongest riders who are packing a load of good luck have a chance to carry home the cobblestone that serves as the trophy.

There is a reason that so many bikes, accessories, and components carry the name "Roubaix".
Posted by JBar at 4:21 PM

Email ThisBlogThis!Share to TwitterShare to FacebookShare to Pinterest
Labels: Paris-Roubaix

Thanks for the reminder of this! Def going to set the ol' dvr.
Hope your healing well. Hope to see you on the rivertrail sometime soon.
later,
CBurnGo

Paris-Roubaix did not disappoint! Carnage, suffering, broken equipment, champions stranded on the roadside, drama, tactics and a surprise victor. Bike racing doesn't get much better.