Well, there's been plenty going on, but I just haven't seemed to have the umphhh! to do much writing. The real job has been demanding and sitting back down at the keyboard has had little appeal, but here goes...

Burns Park
Our friend Sean Clancy had a byline on very nice front-of-section article in the Democrat-Gazette this week, featuring the ongoing trail work at Burns Park. He included some interesting historical information about the park and got a very good perspective on the trail system from volunteer and master trail man Bert Turner.

I rode a couple of days after the controlled burn at Camp last week. Willie dog went along to run as it was a very cool, windy day for the season. If I'd been aware of the conditions, I likely would have left Willie at home and ridden at Burns Park. All of the area around  Yucca/Bridges, Port-o-potty, etc, were scorched and stinky, with many still-smoldering logs were adding smoke to the already acrid air. 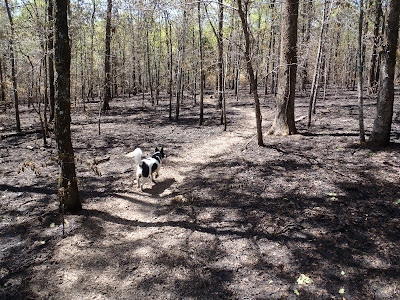 Willie loves to run the trails. The underbrush is cleared but the forest floor is scorched. Willie's feet took a few washings to get them back near white. 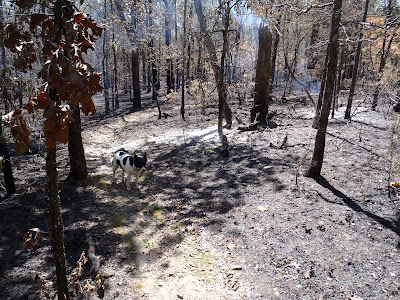 Smokey the Bear would not have approved. The area got an inch or two of rain after the fires, but it's still only a little surprising that it was still burning in a few spots. 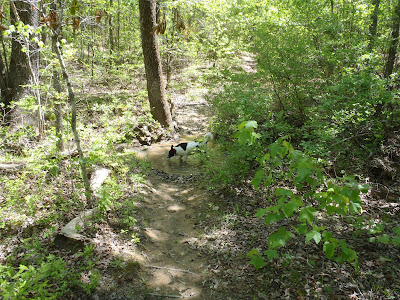 Things were much more pleasant and green over on Airport Loop. Willie cooled his feet and enjoyed a good drink.
I think I'll wait another week or two before I go back to Camp. Though the trails were in great shape and this week's storms have almost certainly knocked down the smoldering fires and the fire pit aroma. I'm still taking it very easy on the mountain bike, so I didn't ride Buddha, Merlin or any of the other backside trails so I don't know how widespread the burn was. It should green up nicely in a few weeks.
Diamond Bear Coming to Dogtown
Diamond Bear Brewery has outgrown their Little Rock quarters and will be building a brewpub along the North Little Rock River Trail. As I understand, the location will be just south of the Pike Ave. traffic circle on the city land currently used for a weekend flea market. It sounds very cool, with a deck for viewing the river and, by default it would seem, the River Trail.
Shillcut Bayou Bridge
Otherwise known as the (bone shaking, tooth rattling, butt busting) wooden bridge, the narrow bridge near the launching ramp parking lot will be replaced soon. I'm told that construction should begin in June and will not close the trail.
Posted by JBar at 9:13 PM

Seriously, people complain about it? It's a bridge, it's wooden, it has boards for the deck, STFU and spend the money someplace where it's needed rather than replacing adequate existing infrastructure.

We could use more water faucets (that don't taste like chemicals) and bathrooms (hello downtown LR on a Sunday!) along the River Trail instead.

Bryan-Tell us how you really feel!

I don't mind the bridge. Of course, I ride ti!

"We could use more water faucets (that don't taste like chemicals) and bathrooms (hello downtown LR on a Sunday!) along the River Trail instead."

Thank goodness the new AGFC nature center is open on Sunday otherwise you are out of look as far as restrooms go from Rebsamen Park to downtown. If Junior Deputy is open you have some there, but that is it. Availability of water on the LR side has always been a problem. I was so happy last year to discover a working outside water faucet at the Hatcher Agency at 6th and Victory.

I would assume this is a North Little Rock project and not a Little Rock project (little rock is broke). I too do not understand why the bridge is being replaced. Sorry if you are old and too weak to cross a wooden bridge. Get off and walk it if it hurts that bad. That bridge is sound and functioning fine.

If they want to spend some money, how about improving the mountain bike trails at BP? Or marking the disc golf course that hasn't been updated in years.