When I posted a few weeks ago about the proposed Big Rock Bike Park in NLR, several folks opined that Little Rock was missing out again. While Little Rock has not had any recent landmark projects, there is steady progress south of the river.

A Word On How Things Happen and Some History

Now that I'm back at the keyboard here in the JBar Bunker, I'm also finding myself sitting in various meeting rooms. It is almost a certainty that I will be seeing the same reliable cycling advocates in meeting after meeting, folks like Brett Budolfson, Coreen Frasier, Stacey Tierney and others are steadily plugging away to represent our community in the halls of government or wherever our voice needs to be heard.

These efforts of these volunteers are, in large part,  how we came to have the Arkansas River Trail, the Big Dam Bridge, Two Rivers Bridge, and on and on. The roots go back decades with folks like Gene Pfiefer, Ken Gould and Judy Lansky, and many others. In 1992, citizens banded together and campaigned to block the extension of Rebsamen Park Road to Highway 10. If not for those efforts, instead of a chain of parks, bridges, and bike/ped paths we have now, we would have another high speed east-west highway along the river.
On October 10, CALS and the Clinton School of Public Service will host a discussion as to how this "Save The Parks" movement came about 25 years ago. 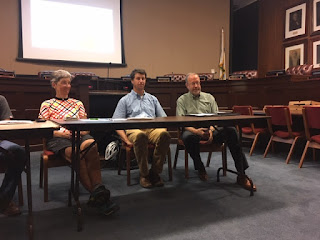 This committee was initially formed to apply for Bike Friendly Community status with the League of American Bicyclists. North Little Rock had successfully applied and the NLR designation made many of us on the north side of the river quite proud while Little Rock seemed to languish in a lack of interest.
Mayor Pat Hays kept North Little Rock engaged and moving forward, while in Little Rock, volunteers were frustrated by a lack of buy-in by the City and unclear goals. Things have evolved over time. The North Little Rock BFCC faded and disappeared as folks in Little Rock kept plugging along. City staff got involved and a BikePed coordinator was hired. That post is now held by John Landosky.
Little Rock achieved its primary goal with a Bronze Bike Friendly Community designation several years ago, and the committee continues to champion efforts like Complete Streets, a comprehensive streets plan that requires consideration of bike and pedestrian needs for new and resurfaced streets.
These efforts often take years of discussion, bureaucratic tedium, and small gains, but that is how things get done.

Committees Can Only Do So Much-- Community Buy-In Required
In Little Rock, a recent example of a missed opportunity is the upcoming resurfacing of Pleasant Forest Drive.  City staff had recommended the inclusion of bike lanes; however, a few neighborhood residents were vehemently against it and mobilized opposition in the form of public comments. As is often the case, the " 'aginners" were very vocal, while supporters were relatively quiet and assumed that somebody else would carry the ball. The result is that this designated bike route will not have bike lanes.
A similar revolt by a few well-heeled and well connected residents of the Canal Pointe subdivision killed a well-thought and long discussed traffic calming proposal for Riverfront Road. A few loud voices convinced City Hall that they would be grossly inconvenienced by being restricted to only two traffic lanes for 6/10ths of a mile.

My point here is that when you see those social media calls for public comment for things that you support within your community, please let yourself be heard.

Largely as a result of the LRBFCC, Little Rock has completed or has planned a number of projects to better serve cyclists and pedestrians.
Check the link below to view them.

In addition, there have been major improvements and expansions to mountain bike and hiking trails in various city parks. I'll try to catch up on some of those soon with an overview of projects from Central Arkansas Trail Alliance (CATA).
Posted by JBar at 12:51 PM

An excellent commentary of the state of Bike planning in Little Rock.
Thanks for your insights.