I saw an inquiry on the Mello Velo page yesterday asking for information on preparing for the MS150 this weekend. While this weekend may require rain gear and possibly a flotation device, the following post from 2012 may be helpful to some folks. It also contains a little insight into the earliest BDB100 rides.
It also reflects my tedious attention to detail at the time. You can always just hop on your bike and ride, and likely be fine, but I was always more comfortable knowing that I was self-sufficient for nutrition and minor mechanicals. 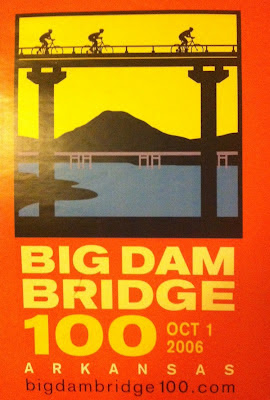 Fall of 2006 was an exciting time for cyclists in Central Arkansas.
Since that time, the popularity of cycling has grown in Central Arkansas along with the ride. The route of the BDB100 has evolved with the opening of Two Rivers Bridge, making it practical to send riders over the Arkansas River at Toadsuck near Conway and to add the pain of a climb up Wye Mountain at about the 60 mile mark. All of that makes for a challenging ride, though as I was told early in my still-short riding career, any time that you ride 100 miles on a bicycle, you've done something pretty hard. So, how do you approach a 100 mile ride?  Most of my readers have done at least as many centuries as I have, so I'm not breaking any news to most of you. In my first few years of riding, long rides were the norm, either on some event ride or just heading out on the road with my neighbor Darwin who just had a penchant for riding long.  Event rides are different than just heading out with your buddies, and some have more of a race feel than others. For many riders in the BDB, specific time goals have been set and plans are being made, and even the most casual rider will be looking for the clock as they approach the finish line on NLR's Main Street. Here are a few simple things that might help you cut a few minutes off of your time:  - Before the ride- clean and lube your bike. Check that all bolts are tight. Look your tires over carefully and replace any that look questionable. Check the contents of your flat bag. I know I'm not the first rider to stop to fix a flat, only to remember that I had used a CO2 to help somebody out months earlier. My little bag will contain two tubes, powdered in talc for ease of mounting and wrapped in plastic wrap, three CO2 cartridges, inflator, tire levers, 4,5,and 6 mm hex wrenches, and the universal fixit, money. 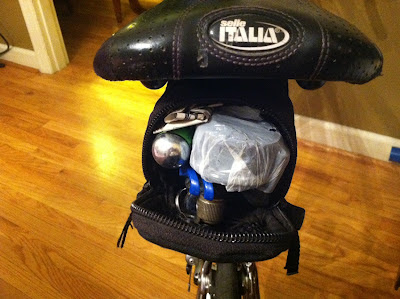 The contents of your seat bag should be carefully selected and thoughtfully packed.
- If you're riding with a club or a group of friends, know the capabilities of the group and be realistic.  If you're a 6 hour century rider, don't expect your faster buddies to hang around. If you expect to ride a 5-hour pace, don't promise your slower friends that "we'll stick together". It just won't happen. A canny rider trying to make good time shouldn't be expected to drop off of a fast pack to hang with somebody who is flagging 20 miles into the ride unless a blood oath has been sworn. The same often goes for early flats or mechanicals. If it's you that breaks down, just fix your stuff and adopt another pack. -Get out of town! The power of a large peloton is amazing. Take advantage of the big early packs to make miles early in the ride by going out as fast as you can without compromising the rest of your ride. It doesn't do much good to rock through the first 20 miles only to blow up at mile 40. -Skip the early rest stops. This ties into the "Get Out of Town" advice above in that you want as many riders as possible/practical behind you. By getting out ahead of a large number of riders, you increase your chances of catching an optimum group coming by as you make stops or fade later in the ride. You should have started the ride well-fueled and hydrated, so there's usually no reason to even consider a stop before 30 miles. Exceptions to this rule can include, "I've absolutely got to pee" and "I know this stop has really good cookies", but make all stops short. Fill bottles, grab some easily digestible solid food, and get moving. You don't really get any rest at these stops, you just get stiff legs to suffer through when you get back on the road. I seem to have fallen into a bit of a pattern of making two stops, the first at around mile 50 and another at mile 80. A good stop is less than 5 minutes if you're serious about making time. 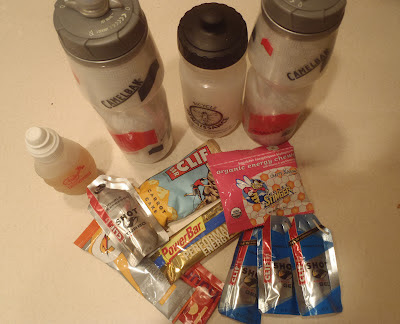 A big event is not the time to experiment with food. Stick with what is proven to work for you.
-Carry most of the nutrition that you expect to need. This usually includes includes drink mix for me. I carry at least one single-serving Gatorade packet with me if I'm unsure what's going to be available on the route. You can pack your own in a snack-size Ziploc.  Most of the stops at the recent Ride MS event were stocked with blue Powerade, which rates just this side of warm piss in my book. The BDB stops are usually well-stocked, but it pays to be prepared to take care of yourself.  I also carry a couple of bars and a handful of gel packs or a flask. A gel flask makes it much easier to get some food down in a pace line. This strategy allows you to choose your stops based on the wishes of your group. It sucks to be rolling along in just the right bunch, only to have to make a forced stop for food. If you're serious about making time, a third water bottle in a jersey pocket can extend your early ride range. I sometimes take a bottle that is about to go to the recycle bin, anyway, and toss it at that 50-mile stop. The fast riders that really race the course and chase a 4-hour time won't stop at all, usually arranging some kind of support to at least hand up water bottles. A few guys do it on what they can carry, but most folks will need more hydration than can be carried. Whether you're trying to make your first sub 5-hour century or just want to take a few minute off of last year's time, a little strategy can help you avoid some common time killers for any pace. It's frustrating to come in at 5:10 while thinking back on that 15 minutes that you spent milling around at mile 30. Some folks enjoy a casual ride and a pause at every aid station, but I'd rather get it done, get out of my sweaty bibs, and then enjoy a cold IPA on Main Street as later riders stream in. Get ready and then enjoy the ride. I'll see you out on the road.