The BACA meeting that took place Tuesday, January 6, produced some good information and discussion with representatives of three key entities within central Arkansas; those being Pulaski County, the City of Little Rock, and the City of North Little Rock. Here are a few key observations:

Though Judge Barry Hyde reminded us that he had only been on the job for two days, he seemed to have a good command of the current state of things. He spoke briefly about what led him to run for County Judge, his experience in the state legislature and in business as a successful general contractor, and his broad goals for his tenure as judge.
First, let me say that Hyde is a rider. I've never been out on the bike with him, but I heard through some of our common business associates a couple of years ago that Barry had started riding. That fact is important to us, as he knows first-hand the value of out trail infrastructure, and has also experienced some of our shared frustrations with trail maintenance and things like the "tack attacks", having fallen victim to "about 40 tacks" in his tires on one otherwise fine day. 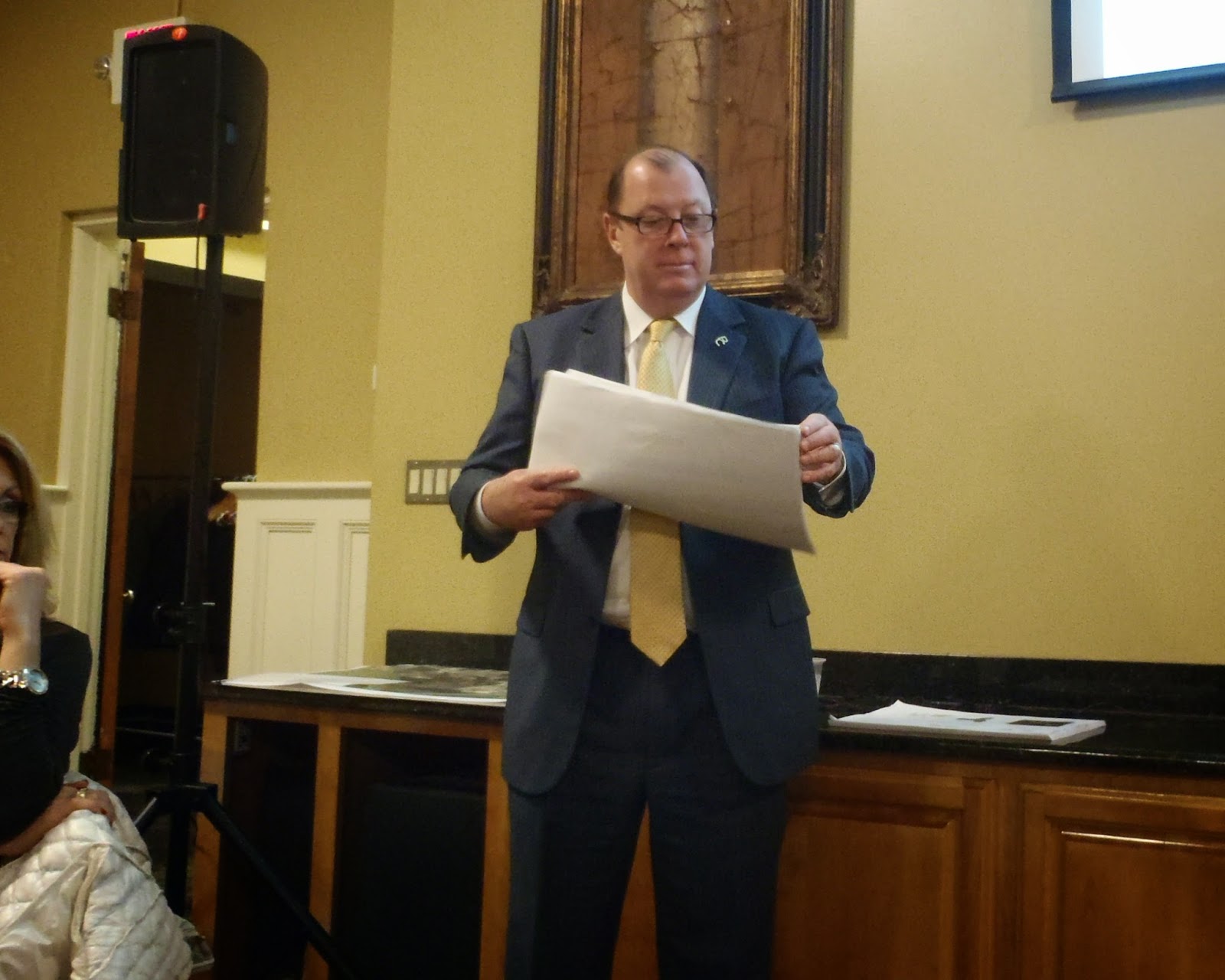 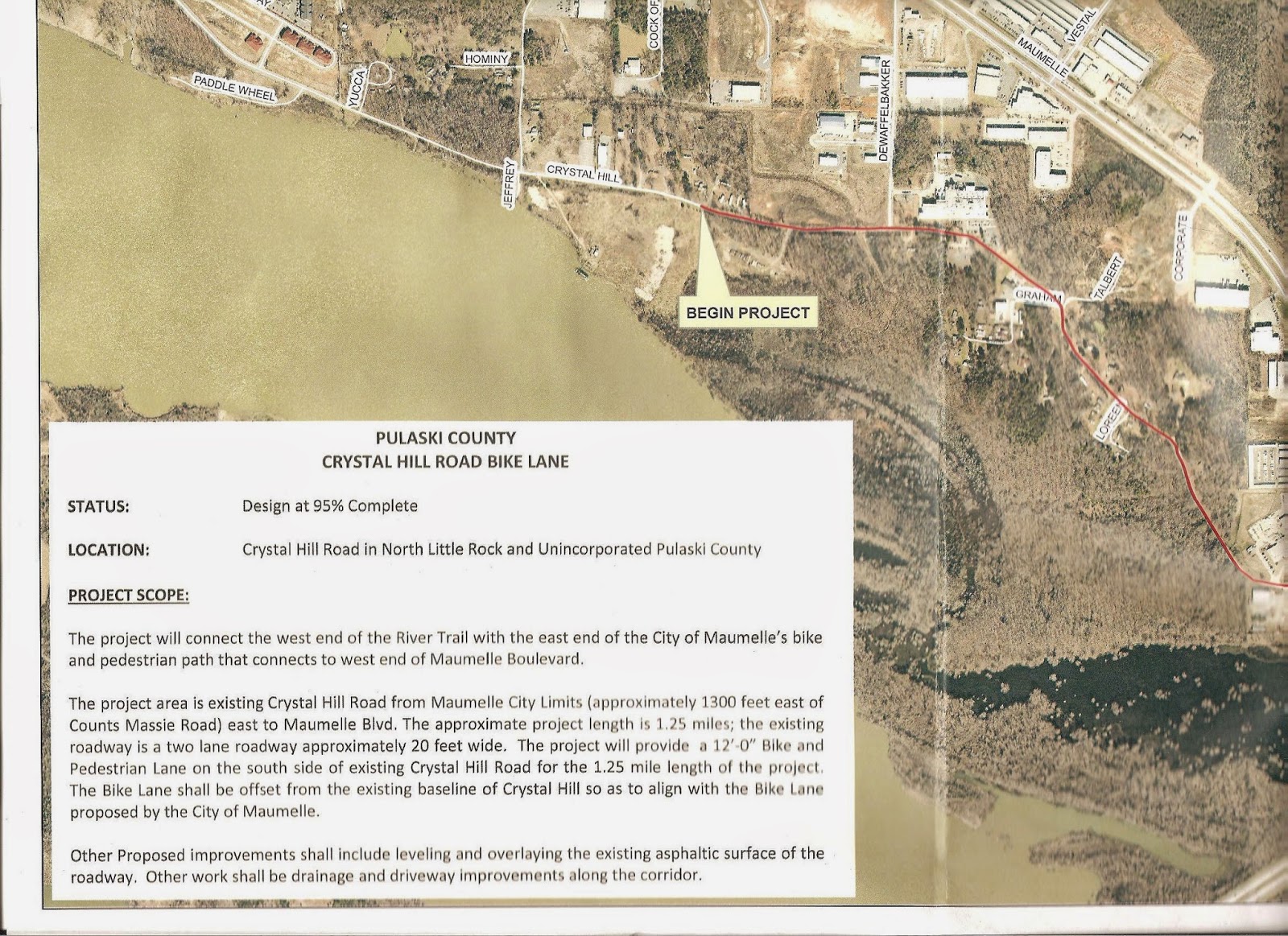 This 14' wide trail along Crystal Hill Road will join the Maumelle trail project and intersect Maumelle Blvd just west of I-430.
Hyde pointed out that a new trail section joining the River Trail to the newly expanded Maumelle Trail system was already planned and funded under Judge Buddy Villines. The trail junctures at I-430 are still sketchy due to the on/off ramps and heavy traffic, but the new route will help cyclists safely avoid the heavily travelled Maumelle Blvd.
The new judge touched on a number of topics. His top priority is public safety and resolution of the long-running issue of overcrowding at the Pulaski County jail. He pointed out the value of the River Trail system in bringing industry and talent to the area, saying, "Smart, young people want to live in a cool place...." and things like the trail system and bike infrastructure  are highly valued when it comes to making a decision about where people want to live.
While Hyde pointed out that his primary responsibilities lie outside of the Incorporated areas of the county, county government is responsible to all of the citizens of the county. He said that he was disappointed that a means of completing the Arkansas River Trail near Dillard's and the Episcopal Collegiate School had not come about, and that he would "encourage" completion. He was careful not to assign any blame, and was positive in his comments. He is, after all, an elected official, and much of his success will come through cooperation with the City of Little Rock and its civic and business leaders.
Barry Hyde had my support in the recent election, and I look forward to seeing him in action as judge. I know through some business dealing that he can be passionate and willful, but he is also thoughtful and willing to listen. The shoes of Judge Buddy Villines will be hard to fill, but I am hopeful that Judge Barry Hyde will provide good results with his own brand of leadership.
The City Of Little Rock
LR Bike-Ped Coordinator Jeremy Levno brought us up to date on activity on the south side of the river. 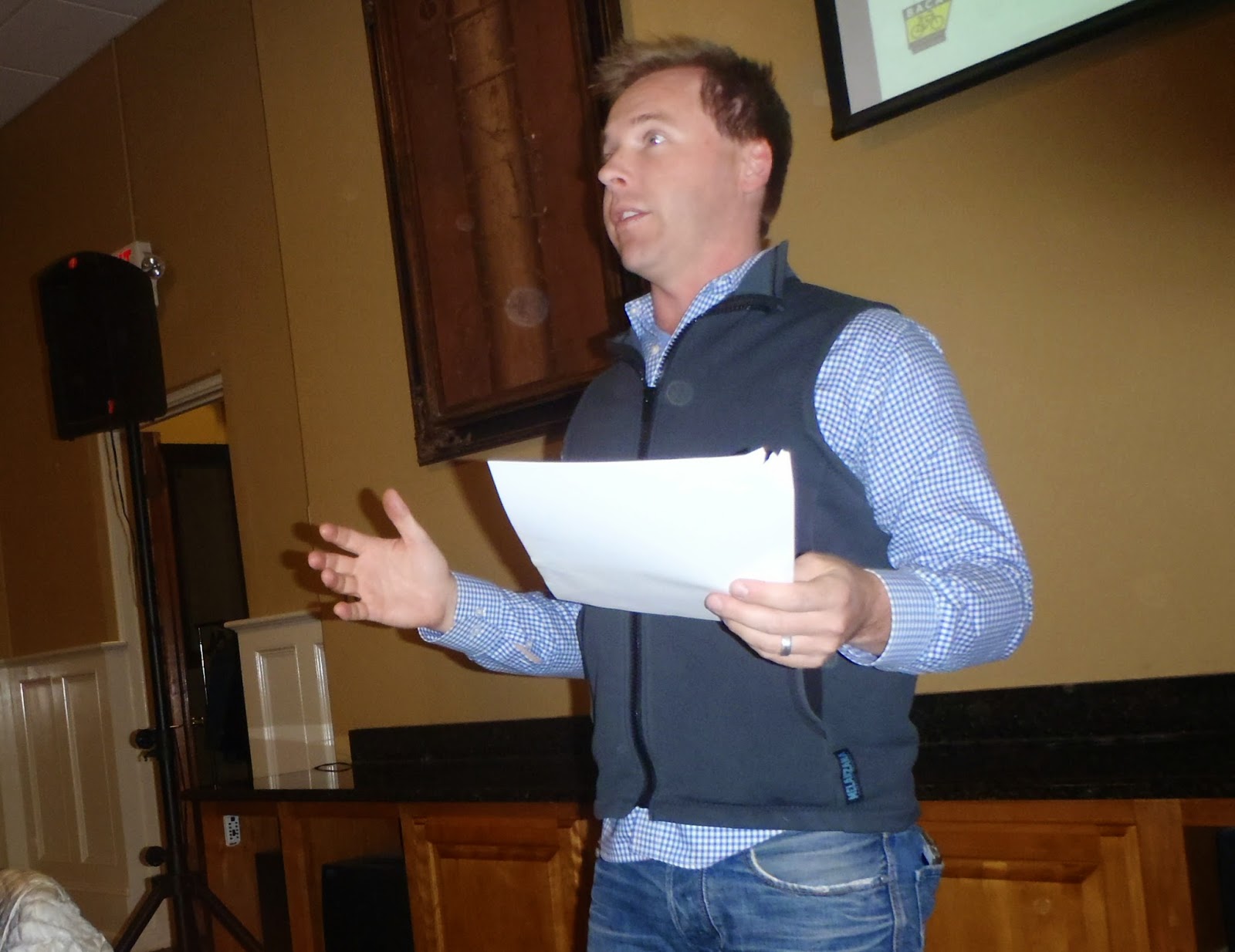 Jeremy asked Little Rock residents to contact their city directors ahead of the scheduled January 20th vote on a Complete Streets policy.
Little Rock has failed thus far in its efforts to gain Bike Friendly Community status as awarded by the League of American Bicyclists. Despite real progress and strong Bike Friendly Community Committee composed of citizens and city staffers, applications are pretty much a waste of time until the City adopts a Complete Streets policy. In general, a Complete Streets policy requires the city and developers to evaluate the needs of pedestrians, cyclists, and any other non-motorized transportation and and include accommodations for those users. This could mean sidewalks, bike lanes, traffic calming measures, or multi use trails. While such accommodations are proven to increase property values in adjacent areas and enhance the quality of life for the tax paying citizens who use them, there is a knee-jerk reaction among most developers and some politicians that this is somehow a bad thing.
Little Rock recently reduced the number of traffic lanes and added a bike lane on a portion of Louisiana Street downtown as part of the Bicycle Master Plan to create safe routes throughout the city. The implementation was based on extensive traffic studies and many months of discussion and planning. Unfortunately, it was not communicated well to some local business owners and there was appreciable backlash and confusion. Traffic managers went back to work to improve on signage and lane delineation, and things have calmed on that front.
There is also a plan to create bike lanes and traffic calming measures on Daisy Bates Drive. Little Rock City Director Erma Hendrix has somehow decided that bike lanes are a racial issue, as if Little Rock did not have enough real racially divisive issues.
You can read some of the discussion here on ArkansasMatters.com.
"With it being named for a historic black woman, we don't want bike trails on that street. If I don't respect my color, who will?" Hendrix is quoted as saying.
All I can say to that is, "HUH?" Bike lanes get people out of their cars and in touch with their communities. I simply cannot fathom how she has decided to make this a racial dividing line, as the central Arkansas cycling community is one in which people simply get along, regardless of race, and there are large numbers of African American riders among both recreational riders and cyclists who use bikes for basic transportation.
Ms. Hendrix is guilty of stereotyping her constituency and cyclists, groups that are not mutually exclusive. I'm not sure if her words were spoken thoughtlessly or if her political worth depends on divisiveness, making her position more calculated and all the more disappointing. In any event, the City has backed off of plans to implement it own Master Plan, apparently out of fear of Hendrix, as the plan was apparently supported by most residents of the area and by entities like Philander Smith College, the Quapaw Quarter Association, and the principal of Central High School. I guess if Ms. Hendrix's goal is to stop progress and maintain the status quo in her district, then she has been successful for the moment. This goes down as another disappointing chapter, albeit a small one, in Little Rock's efforts to show itself to be a progressive city.
North Little Rock
Burns Park Ranger Ian Hope reported that the NLR Bike Friendly Community Committee is reforming with Alderman Charlie Hight as the chair. Willa Williams had been leading the committee, but her position was dependent on a grant and funding ran out last fall. Thanks go to Willa for a job well done.
Ian Wanted to remind riders of the traffic pattern at Championship and Tournament Drives in Burns Park. Riders passing on the River Trail through from either direction have yield signs, while cars heading toward the river and turning left or right have the right-of-way. Riders usually blow through and cars almost always stop, but REMEMBER, at this location the through traffic is to yield. I know it is frustrating to yield, only to have cars stop and wave you through when they have the right-of-way.
This is a poorly designed intersection and the present signage came about as folks attempting to reach the launch ramp had to sit through long streams of soccer moms exiting the park during tournaments. Feel free to complain about the signs, but obey them for your own safety.
Arkansas River Trail Task Force
Rob Stephens spoke about the 911 location markers along the trail, and the implementation of the system. A few of the trail markers have been found to have come loose, while others seem to have been pried up and taken as souvenirs. The medallions are affixed with epoxy and plans are to find a more secure means of attachment.
Rob hinted at a fresh Arkansas River Trail System project that would take advantage of some existing designated routes. He likes to quietly go about doing his homework before he goes public, but I know that he has got some things simmering that will  be welcomed by the cycling community. Stephens and the ARTTF operate under the auspices of Metroplan and do a whole lot more for our benefit than most people realize.

Thanks for the update, JBar! I had no idea the extension of the bike path in Maumelle was even in the works. This will be welcomed by the Maumelle cyclists that want to ride to the River Trail.