The Little Rock tandem team of Rob and Teresa Hernandez will be hosting a couple of hundred of their friends as the Southwest Tandem Rally brings 100 teams from 14 states and a team from Ontario, Canada. Those are not official numbers, but my count from a quick scan of the list of riders. Not surprisingly, most of the teams are from Texas. Based on my scant research into the recent history of the SWTR, it has been held at various locations around Texas each year. Most impressive in the roll of teams is that there are only 5 from Arkansas. That means that 95 out-of-state couples and their entourages will be renting hotel rooms, eating, drinking and shopping in Central Arkansas.

Michael Chaffin of the Capital Hotel worked with the Hernandezs to make the Capital Hotel the event headquarters, with overflow heading across the street to the Double Tree. There are very few doubters of the fact that cycling means good business for Arkansas, and this event is a prime example of a very direct contribution to the local economy.

Ya'll Come Back, Now..
What Chaffin knows is that many of these people will return once they sample the facilities, the hospitality, cycling infrastructure, and the fantastic road riding that they will experience in Central Arkansas. 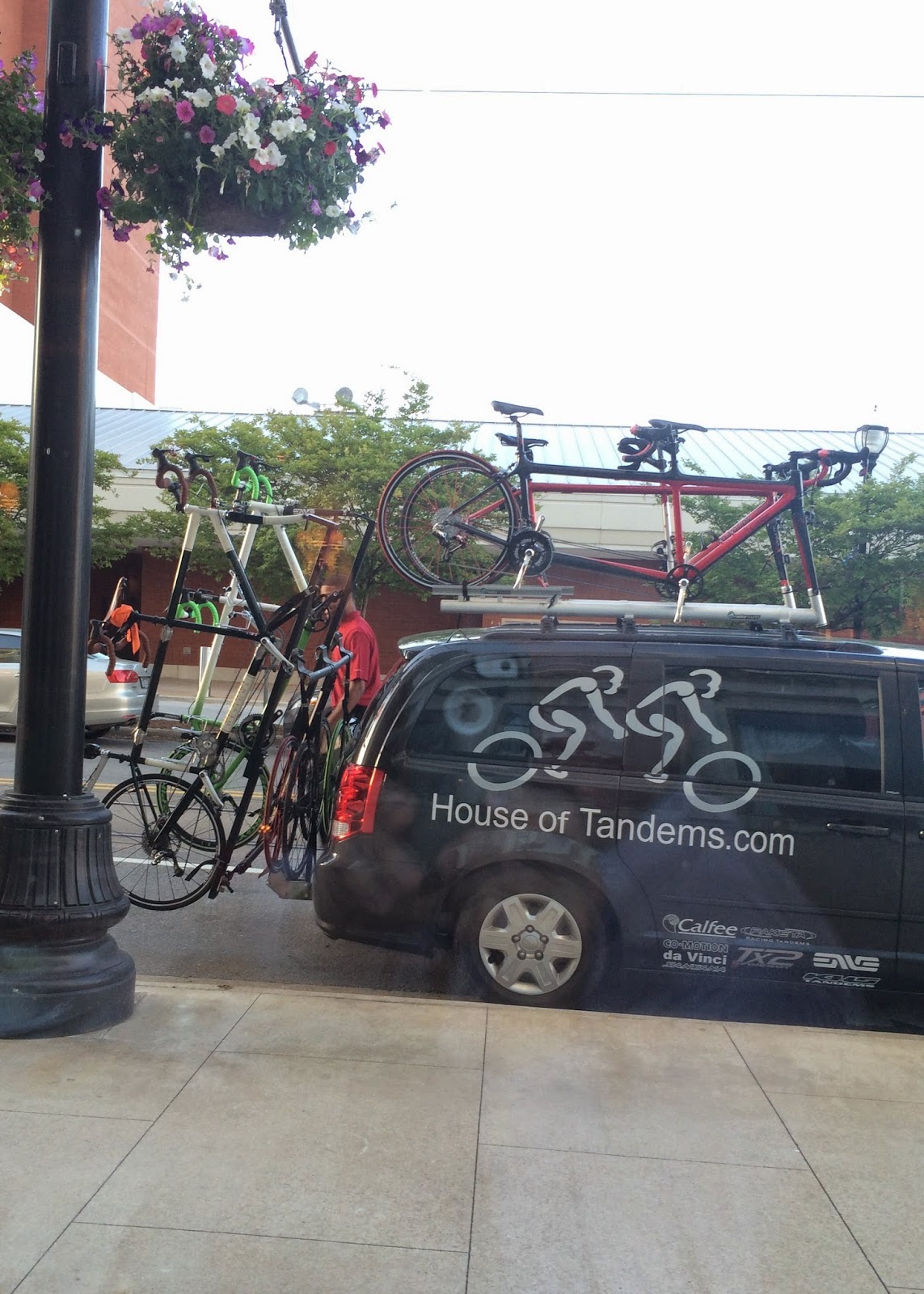 Early arrivals at the Capital Hotel
Photo by ace photog Rob Stephens from his dinner table at Ashley's Thursday.
Did I mention that the hanging baskets at upper left were provided by LR Parks and Recreation? Well, I was supposed to, and they obviously did a fine job. (is that payment enough for the photo, Rob?)
Follow this link to the SWTR website and you will see that Rob, Teresa and their team did a great job in promoting the rally (it sold out almost immediately) and in putting together an exciting slate of activities and resources for participants.
I ran into Tony Karklins, of Orbea USA, and Michael Chaffin on a ride this evening and found that the Capital had gone to some lengths to make the weekend special for cycling guests. The Capital always offers bike valet service, and for the tandems they have built special racks and set aside the ballroom for secure bike storage. The hotel will also provide laundry service for bike kits. Just stuff your stinky kit in the bag provided by the hotel and your clean clothes will be hanging on your bike when you head down for coffee. 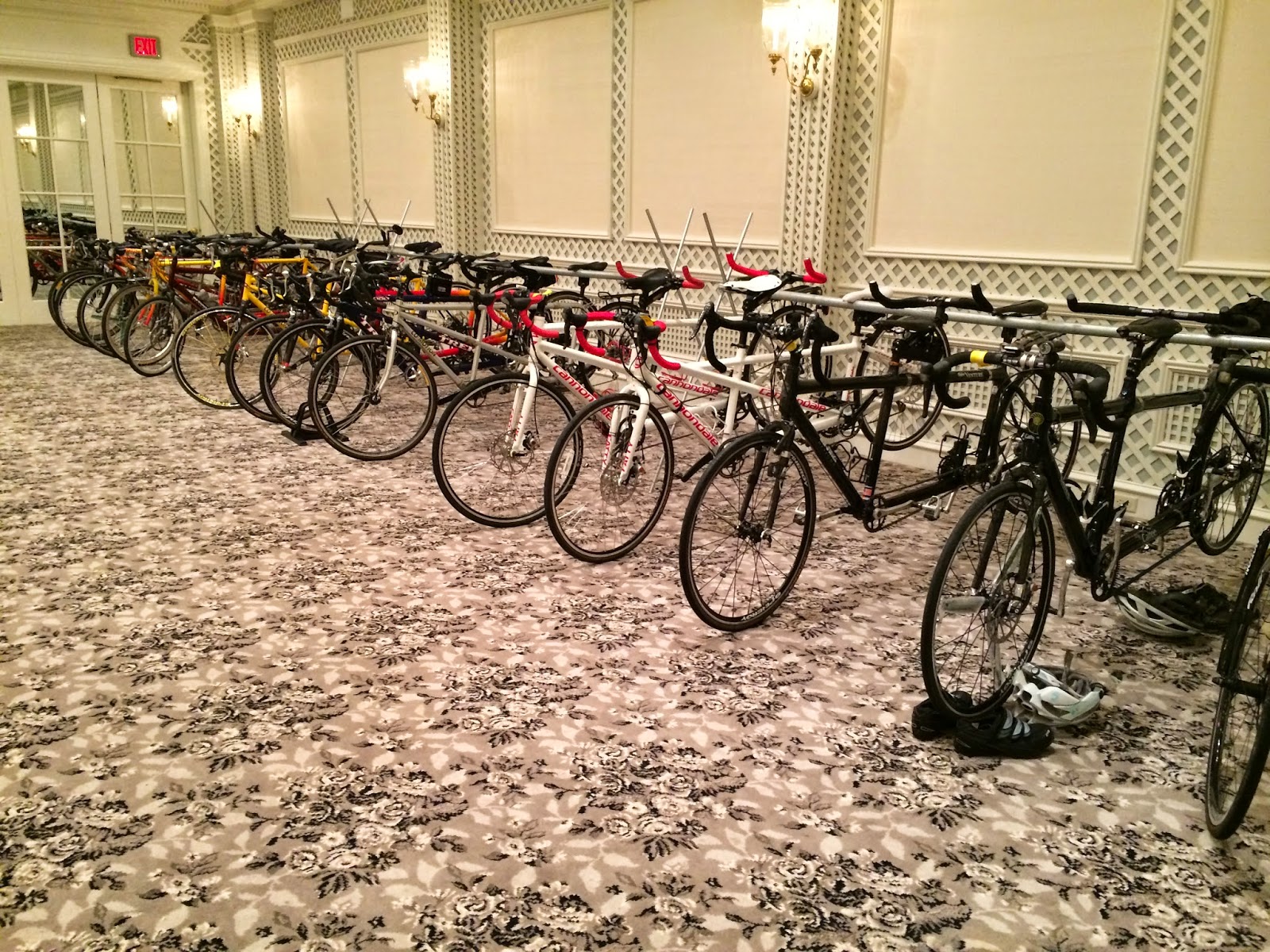 The SWTR website not only promotes the rally, but it shows off our city very well. It is easy to forget some of the elements that are making the Little Rock-North Little Rock area into a unique and vibrant urban destination.
I plan to spend some of my weekend ride time on my usual route out west shadowing the tandems' route  to get a few photos. And I'll make it a point to get back downtown in time to watch some of the Rock City Crits, Then, I may have to stop by the bike-friendly Stone's Throw Brewery for a local IPA.
Folks, we're living in a bike town and for this weekend that fact will be very apparent as criterium racers and their fans converge on downtown while 100 tandems stream out of nearby hotels to the start of their choice of 3 road and river trail rides.
Get on your bike be a part of it.
Posted by JBar at 9:54 PM

This event is awesome for our town. We talked to a couple teams from Houston early on and they were loving our cities and River Trail.

This was a great event, Capitol Hotel did a great job getting folks out and keeping them happy. Couldn't have picked a better weekend for it too, you couldn't throw a rock without hitting an awesome bike event!

Thank you for sharing.Bike Shelters Connecticut