The weather forecast was keeping eveyone nervous in the days leading up to last Saturday's BDB100, with rain probabilities ranging from 30% to 70%. E-mail lists and message boards were alive with the  question, "What are you going to do if it rains?" Like most folks, my bunch just decided to saddle up and see what happened, which turned out to be nothing in the way of bad weather and an ideal day for riding a bike. It was cloudy, cool, and not too windy. 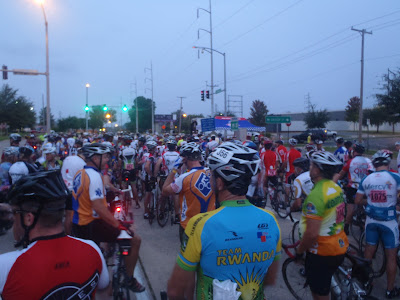 The morning broke cloudy and cool, but the pavement was dry and the rain stayed away for the 2012 BDB100.

Best laid plans..  Our ride.
Our core group actually managed to pretty well stay together after a few early splits, and we came in just about where we expected at 51/2 hours total time. Probably where we deviated from our practice on previous BDB's, a routine that resulted in faster times with little more effort, was our pace in the first 20-30 miles and a couple of over-long stops (OK, my folks were waiting on me!). We likely failed to take full advantage of the dynamics of the fast front groups by settling into a moderate pace very early on. It is hard to keep a group of any size together while jumping from pack to pack trying to move up, especially when riding styles differ. We also stopped to make sure that things were under control at the scene of a violent crash that erupted near us in a big pace line, and I spent waaayyy too much time waiting in line to pee at our first rest stop around mile 46. An extra 5-10 minutes taken early will haunt you! By the time we got to Wye Mountain, I was admittedly the weak link in our little pack, fending off leg cramps and glad to see my friends gathered at the aid station just past the summit waiting for a couple of us late-arrivers. Those same folks pulled me into town a little later on. I've suffered more on long rides than I did on this day, but it wasn't my best day. Thanks go out to my hard-working companions. Note to self: Train harder, drink more fluids.

Thanks go out to Fred Phillips of DLT Event Management for their usual fine job of producing the ride, and to all of the law enforcement folks who did their part to keep us safe out on the road. There was a police officer at virtually every intersection along a route that encompassed 3 counties and several cities and towns. The aid stations that we visited were well-stocked and I am always glad to see plain lemon-lime Gatorade. I think some events use whatever is donated, with the result being the doling out of Powerade of some color not found in nature. I did, however, find myself yearning for a banana slathered with peanut butter as was served on the recent Bike MS ride.

I haven't heard much from folks who did the shorter courses, but that's probably a good sign. Last year's 50-68 mile routes surprised a lot of riders with the climbs on Batesville Pike, resulting in long lines of people walking bikes up the biggest hill. The 100 mile course just keeps getting better. The route through Conway was different from last year and a little loop to the Houston community made the ride very close to 100-miles as opposed to the 105 we were blessed with last year. Wye Mountain has added a character-building climb of 3-4 miles and there are plenty of smaller climbs and rollers along the way. The opening of Two Rivers Bridge made that addition possible and also got the return route off of Maumelle Blvd., a move welcomed by riders and drivers alike. The resulting route is a well-balanced mix of town and country along with hills and flats; something for everyone to either love or complain about.

The usual.
There are a couple of pieces of equipment that have absolutely no place in a big, mass ride like the BDB, those items being aerobars and ear buds. I'll qualify the aerobars to say that I have ridden comfortably with people I trust who were on bars, but generally speaking, they have no place in a pace line. Save the ear buds for the trainer. 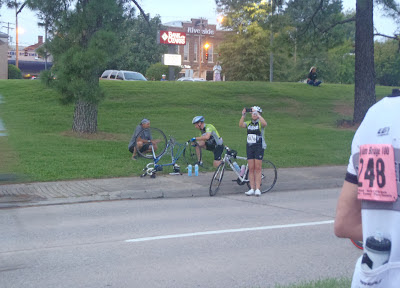 Start-line blow-outs are slightly amusing to the crowd. Less so to the rider with the flat.

Somebody always seems to have an explosive flat at the start. It generally amuses the crowd and gives the curbside mechanic a chance to replace a tube under hundreds of watchful eyes. The seemingly spontaneous
blow-out is usually the result of a tube pinched between the tire bead and rim wall.

There are also almost always a few crashes on rides like this.They seldom involve the fast riders who are off the front, but usually occur with the touch of a wheel or a corner taken too hot in the excitement of the first miles of the ride. One such crash took place in the double line in which we were riding a couple of miles south of Mayflower. I caught some out-of-place motion to my right just as the rider  ahead of and beside me had his wheel clipped by the rider in front of him. He crashed hard over the bars and was hit by the woman behind him. It happened too quickly for me to do anything other than stay the hell out of the way of the carnage. I was a hundred yards or more up the road before I could get safely out of traffic and stopped. One of our riders, Dumas, called 911, and the ambulance was soon on its way. The woman who got the ambulance ride was not seriously injured, it was reported later.One of our team had labeled the front rider in the mayhem as erratic, was conscious of the guy's position and was avoiding him. It's a good idea to pay close attention to those around you when riding with folks you don't know. We all make mistakes, but pace lines depend on predictable behavior, steady handling and a sharp eye for danger.

Joe Jacobs of ArkansasOutside.com hooked a ride in a team car for some local fast boys who were shooting for the four-hour mark. Instead of turning over the pedals, Joe spent the day taking photos and handing up bottles. You can follow the link above to see what that was like.

I didn't ride it this yea, but the 62 mile route was just the Ross Hollow loop up Wye Mountain, which I highly recommend. Maybe not as tough as the back side out of Bigelow, but it's definitely got some steep grades (10-12%). Fortunately they arrive around 25-30 miles in rather than 65.

JBar - Please send my thanks to Dumas for the ambulance call! Mandy and I really appreciate it. She is going to be ok. Thankfully, there were no broken bones just a few bad cuts and road rash. She's on her way to recovery and the bike is in the shop. My memory can't recall the rider you described but most disappointing to me is that I don't recall him stopping or checking on her. Again, please pass on my thanks again to Dumas. I was happy we had found all of you on the early part and was looking forward to riding along with the group.

I saw Steven after the ride and we got a report. The crash blew up,almost right beside me but I did not realize it was Mandy until later Glad she is OK and look forward to riding with you guys again. Will pass your thanks to Dumas.