Arkansas was recently ranked dead last, 50th of 50, among states in terms of being "Bicycle Friendly" by the League Of American Bicyclists. 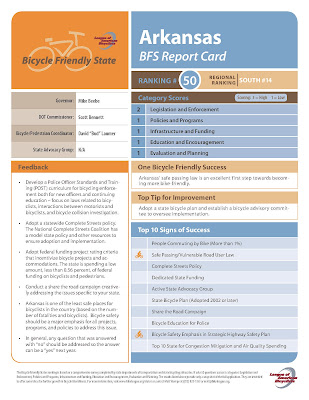 Here is Arkansas's scorecard. It's kind of like two C's and the rest F's.

This news is a week or two old to most of you, as Celia Storey did a write-up in the Dem-Gaz and there has been quite a bit of discussion on the BACA Facebook page and among local cyclists. It also go mention on local TV news stations. 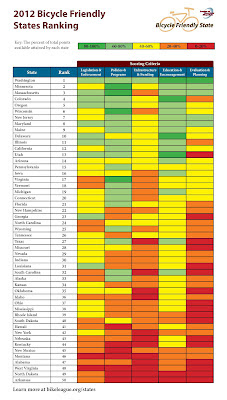 Here's a graphic view of how Arkansas ranked among the other states. Nice colors, but not a pretty picture.

Last year, we ranked 48th, so obviously we're not headed in the right direction. The drop, however,  is more a reflection of others doing better rather than of Arkansas getting worse. The fact is that we're just not doing anything at the state level. I think we got credit for the Safe Passing law, which requires motorists to give cyclists at least 3 feet of room when passing. Nice thought, but the last I heard there had not been a single ticket issued under the law, even in cases where cyclists had been hit by automobiles. In fact, a cyclist was issued a citation in Little Rock in March for failing to ride far enough to the right when he was struck by a passing car's mirror. The ticket was later dismissed, but it demonstrates the mindset of much of the law enforcement community when it comes to bikes on the road. Arkansas also ranked very high in the number of cyclist killed by motor vehicles at 18.

The rankings were based on a survey with an objective set of questions, most of which were answered simply "Yes" or "No", so we were fairly ranked with little or no room for discrimination or favoritism based on regional or other biases.We got what we deserved under the criteria of the ranking, which were for the most part specific to state laws, transportation policies, road construction policies, and the accommodation of cyclists employed or served by state agencies. There was no accounting of the efforts and accomplishments of individual cities or regions, such as Central Arkansas's River Trail System.

So, what does it mean? The application was completed by Bud Laumer, Bicycle Pedestrian Coordinator at the Arkansas Highway and Transportation Department, and Bud answered the questions honestly. The fact is that the State of Arkansas, and the AHTD in particular, simply ignores bicycles as a mode of transportation. The AHTD is referred to by some as the "Department of Cars and Trucks" and that is not unfair. In the AHTD's 49th Biennial Report, the department reported expenditures of $1,746,711,929.44, almost Two Billion Dollars, with construction lettings of close to a half-billion dollars, and the word bicycle appears once in the 30 page report. That was in reference to the inclusion of bike lanes for an overpass in Maumelle. Granted, it is largely a financial report, but alternative transportation systems do not appear. This also holds true of the AHTD Strategic Goals, where the term "alternative transportation" refers only to "intermodal transportation activities (air, highway, rail, transit, waterway, pipelines, etc.)."
The AHTD and the legislature are largely responsible for for the decisions that can influence the State's position in the rankings and it is clear that the AHTD's only priority is motor transportation over highways. Period.
Again, the survey does not reflect any of the local efforts like those underway in Fayetteville, Conway, and all of Central Arkansas, where even now an agreement is being formalized to create an 88 mile Arkansas River Trail System. While we point to these wonderful achievements with pride, it is obvious that a statewide vision will be required to further our progress in accommodating people-powered transportation. The embarrassing last place finish is serving as a wake-up call for bike advocates, as conversations are underway on how to best create some sort on statewide bicycle advocacy group or an umbrella organization to unite existing entities, such as BACA, into an effective voice.

Cycling in Arkansas is big and is growing. Now, we need to get the State of Arkansas to recognize the value of this robust, healthy, and attractive transportation and recreational alternative. The cycling infrastructure in Central Arkansas is already serving as a magnet for tourism and industrial development. Let's expand that vision to include all of Arkansas.

The quad citiesn of NWA(Fayetteviile, Springdale, Rogers, Bentonville) put LR to shame. These cities actively support the cycling community and are working to build a wonderful trail infrastructure that will connect all of them.

While I don't have first-hand knowledge of the NWA situation, I've never heard the opinion expressed that it puts Central Arkansas to shame. We presently have a wonderful trail infrastructure and are working to make it even better.But let's not argue. Instead, let's work together to connect ours to yours, then you can ride down and see how cool we are!

The "comment removed" was deleted due to the fact that it contained commercial spam link, not due to the comment.

DFL! DFL! With not a single Bike Lane downtown, Bike Route signs that tell cyclists to get onto the sidewalk, with world traveling cyclists being plowed down by cars with not even a ticket given to the driver, with a cyclist being killed by driver running a redlight and the driver getting a $500 ticket....Never! I am so shocked!

The fact that Arkansas is building an 88 mile "River Trail" further illustrates Arkansas's backwards bicycles don't belong on the road policy. We shouldn't have to build separate infrastructure/playgrounds for bicycles. I've lived in other states with really popular multiuse paths and I've seen where these multiuse paths lead, they end being taken over by pedestrians which is great but leaves bicycles no safe place to ride on them. So when people say these are being built for cyclists I call bullshit, I think they're great but something needs to be done to allow bicycles the right to Share the Road.

Dear Anon,
I guess you failed to look at the map or read the article, but the vast majority of the Arkansas River Trail System, approximately 75%, consists of designated routes on public roads and highways. Feel free to call "bullshit", but please take a little whiff before doing so.

Thanks Jbar. These point hit home with me.

Ignorance of safe passing law. Not been a single ticket issued under the law.

Cyclist issued a citation in Little Rock in March when he was struck by a passing car's mirror.

Cyclist being killed by driver running a redlight and the driver getting a $500 ticket.

Of course we have the Anonymous NWA vs Central Arkansas commentary to show us why Arkansas is #50. With a mutual distrust of what others are doing (especially rampent between Pulaski County and most neighbors and the counties of Benton and Washington), law enforcement that is laughable (kill a cyclist? 500 dollar ticket. hit a cyclist with your mirror? ha we'll ticket the cyclist), and AHTD administration that is inept at building roads (much less figuring out complete streets) we deserve no better. Sadly, Arkansas can expect to hang out in the dumpster for a while it seems.

A follow up to my last comment: Bud Laumer is doing a pretty good job with the resources he has, and my commentary about AHTD shouldn't be construed as comments about him, but more the Arkansas Highway Commissioners and other high level state officials that have direct control over state policy. I fear it will only get worse after this election cycle: you're going to have the so-called "Tea Party" come to town and try to cut funding for everything so we can cut taxes on truckers (and transfer that cost onto the general tax payer) some more, even though they do the majority of damage to the roads.