I'm generally not real big on rules. Most things just kind of take care of themselves in a civil society, but I also understand that there are many rules in the form of regulations, ordinances and statutes that we are expected to obey. Or not.  Is a rule really a rule if nobody knows about it? Yes, as a group of riders on a night ride found out last week when they encountered Pulaski County deputies patrolling the River Trail in their vehicle. By all accounts, it was a cordial enough encounter, with the riders being informed that the park was closed after dark. The riders were allowed to continue on their way out of the park and back over the Two Rivers Bridge. The question becomes, is the park closed after dark? Does that mean everybody?
Pulaski County Judge Buddy Villines has publicly stated that the ART through Two Rivers Park would be open for commuters 24/7. So, if the guys from the 8:01 (start time) ride group had just been passing through instead of cruising the loops, would that have been OK? Would the deputies have agreed? In an encounter of this type, the officer is just almost always right, and if he's not, I'm unlikely to tell him about it. It's really only fair when everyone has an understanding of what the rules are, so I set out Sunday morning at a comfortably late hour to see what I could find out about the rules at a couple of points along the Arkansas River Trail. It became a 60 mile research project that allowed for plenty of visiting and side trips.

Earlier on the same evening as the 8:01's Two Rivers encounter, I had angrily expressed my opinion of a driver that I had to brake for as he blasted out of Murray Park in an Escalade without so much as a glance at trail traffic. I usually approach River Trail intersections as if I have the right-of-way, though I'm always prepared to stop. After all, we're all ultimately responsible for our own safety. Most motorists do yield to trail traffic, so a rider stopping for a crossing auto can result in a John Prine-ish stand-off.

"It was a four way dilemma
we all arrived the same time
I yielded to the man to the right of me
and he yielded it right back to mine
well, the yield went around and around and around"
The Accident, John Prine.

So, I asked myself whether riders do actually have the right-of-way when crossing the driveways, golf course entrance, and street crossings along Rebsamen Park Road. As often as I ride the trail, I couldn't answer, so I rode out to read the signs. 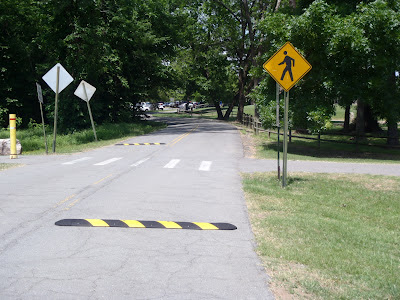 The trail crossing at the entry to the Rebsamen Park Golf Course has a speed bump and a crosswalk sign. 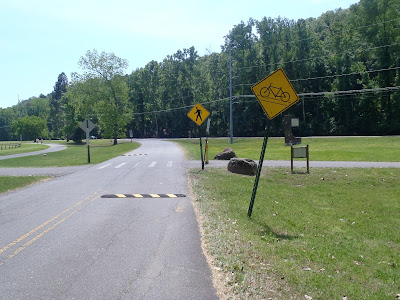 The exit side of the same crossing includes a bike crossing sign. I assume that these signs indicate that cars are to yield and I think the law is clear on pedestrians; however, what about bikes operating on the trail? That's not so clear.

My legal research was limited to reading this, but I do not think there are any ordinances for Little Rock or North Little Rock that specifically address cyclists crossing traffic lanes while on multiuse paths. 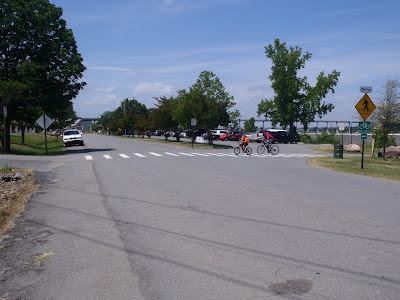 The trail crossing near the BDB indicates that it is a bike path and a pedestrian crossing, but the right-of-way for cyclists is only an assumption. Most motorists yield to cross traffic, but many just barrel on through.

In a roundabout way of speaking...
...the new traffic circle will be a source of confusion until we all become familiar with the concept and function of the new road furniture. 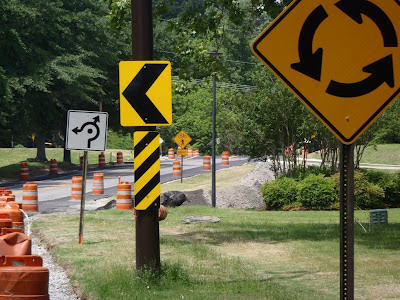 With this signage, I'm sure that everyone will approach the traffic circle with perfect confidence! First, spin in a circle, then move to your left to what looks like an icon of a crested bird that is doubly male. From that point, be alert to cyclists and pedestrians in the crosswalk!


I actually like the concept of the traffic circle and, with proper attention, it should prove more safe than the intersection that it replaced, particularly if Rebsamen Park Road is repaved as promised with functional bike lanes. Riders heading east on the bike path must stop and proceed over a crosswalk to get to the eastbound bike lane. 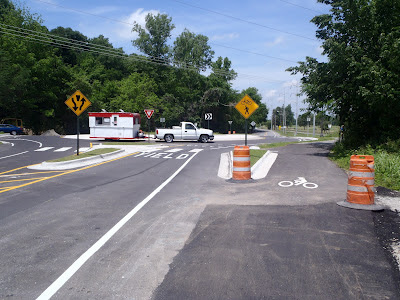 I noticed come confused folks approaching this intersection, but I believe that is because we are simply unaccustomed to the traffic patterns of a roundabout.

Does the instruction to yield seen above apply to riders? Maybe. Sharp-eyed reader Richard Bassett sent me this article regarding the differentiated treatment of walkers and riders in Fayetteville. 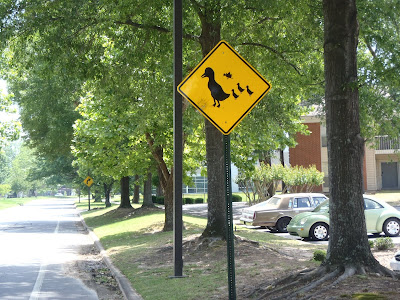 Low hanging limbs? At this point east of the traffic circle, I assume cyclists are just supposed to duck. 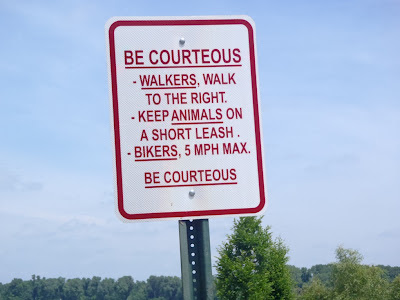 The 5 MPH edict is silly by anyone's standards, and is universally ignored. On the Sunday afternoon that I took this photo, there was little traffic and miles of open trail. A reasonable speed on a bike trail is situational. Adherence to the other suggestions would go far in reducing trail conflicts, most of which are caused by simple inattention.

Recently, I read a good article about conflict on a heavily used multi-use trail somewhere in Florida in which the writer referred to the trail as a roadway. That's a simple concept for virtually anyone to grasp. When you are operating a car, bike, or even walking on a roadway, most folks behave responsibly; they stay in their lane, they signal their intentions, pass on the left, and look where they are going. Transfer that mindset to the RT and folks will no longer walk 4 wide, stop unexpectedly, allow their dogs 20 feet of leash, gather to chat at busy intersections, or drift into oncoming traffic.....and what a wonderful world it would beeee.....

A River Market Danger Zone
Sometimes, confusing signage is worse than no signs at all; however, there is one particular spot on the trail where that is certainly not the case. Near the beginning of the Medical Mile trail section in the River Market, a busy driveway crosses the trail with no warning to either trail users or drivers. 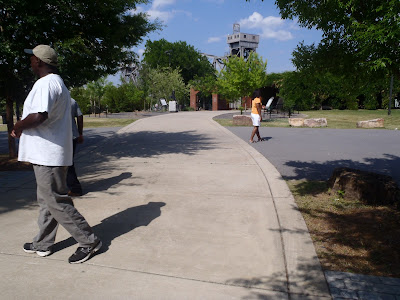 Here's what riders see on their approach to a busy driveway in the River Market. 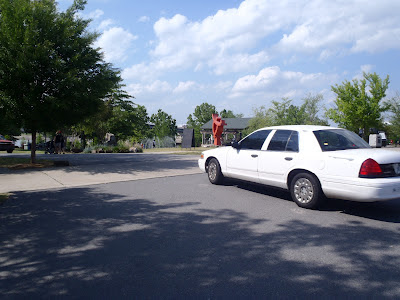 And here is the intersection from the perspective of drivers.

You would think a trail crossing in this busy area would be heavily marked or at the very least have a couple of yellow stripes to caution drivers that they are approaching something!

On to Two Rivers Park!

This article started with the question of hours-of-use at Two Rivers Park and I'll finally get to the question, though I cannot derive a conclusive answer from what I found. First, I checked the approach to Two Rivers Bridge, where that is absolutely nothing to indicate any time-of-day restrictions. In an effort to cover my bases, I went to the foot of River Mountain Road, where I did find a sign. 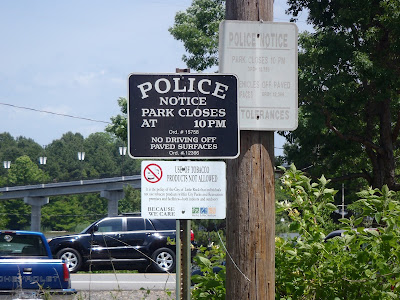 This sign predates the Two Rivers Bridge by many years. I assume the ordinance cited is by the City of Little Rock. The ride group was stopped by Pulaski County deputies. The NLR and LR bike trails are open 24/7; by policy in North Little Rock and at least by default in Little Rock. 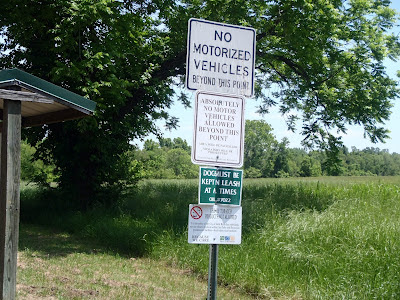 This cluster of signs near the restrooms at the head of the Two Rivers Park trail section covers a lot of ground, but not a word about park hours. So far, even the most conscientious trail users would have no inkling of limited hours-of-use unless they either came down River Mountain or do as I did and round the corner there seeking direction. 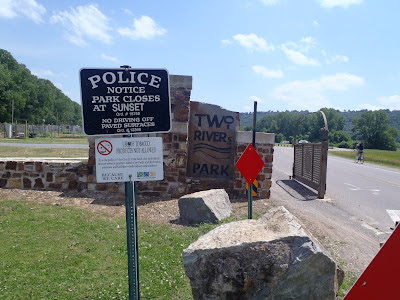 Finally! The only indication that Two Rivers Park closes is found at the entrance from County Farm Road. This is what the officers were enforcing when they asked the 8:01 ride group to leave the park.

My conclusion is that there is no reasonable way to have expected the riders to be aware of a policy posted at one entrance at the opposite end of the park from their access point. The rest of the trail system is open all hours, as are the BDB, Junction Bridge, and Clinton Park Bridge, though I believe that Burns Park through which the ART passes officially closes at 10PM, and I would hope that the Two Rivers trails are ultimately treated the same. I am glad to hear that the sheriff's department has a presence at Two Rivers, as it is quite isolated and such areas can draw undesirable activities, though I would prefer that they be there to keep the park safe, rather than close it.

While I think the riders did the right thing by simply complying with the officers' request that they leave, it would be a better situation if all parties were aware of the policies in force. I've ridden in Two Rivers Park after sunset several times and found it to still be active with riders, runners, and walkers, especially in the winter when days are short and sunset comes early.

Let's go ride.We'll work out the policy issues in plenty of time; hopefully without big rules to solve minor problems.

Fantastic write up with great attention John, thank you for dedicating your time.

Thanks, Charlie. I was still in the edit mode! I hope it doesn't stir up new rules. The current situation of blissful ignorance works well most of the time and I don't think the officers will,be too hard on a bunch of skinny guys in funny pants as long as those guys are on bikes and not romantically engaged in a public venue.

This is a big problem that I have been observing for quite some time. And the golf course intersection is one of the worst problems, I have seen many near accidents there between fast golf drivers and walkers, kids, cyclists, skaters, etc. The bump guards have helped but the golfers just speed around them.

The worst intersection on the LR side is the BDB parking area and that initial crossing because everyone is going several directions. The city has changed it to one-way into the parking which is somewhat helped but I think it needs some slight design fixes and signage to finish it off.

This needs to be addressed because most people just assume that "they" have the right-of-way. Generally, good manners seems to be the best guideline. But unfortunately, everyone thinks everyone else should yield to them....

One of the biggest problems is that drivers don't yield to cyclists, skaters because they aren't in the crosswalk, yet and they don't anticipate speed and there are near-hits all the time. I have literally been in front of a car and they were so distracted by the walker and all her dogs that they nearly hit me, I had to bang on their car to get their attention. Also, lighting is a big factor, often at dusk, drivers just don't see you. I have trouble seeing walkers at dark on the trail too.

We need to 'sign' and address this problem and decide 'who' has to yield to who. Hopefully, this will be done with the design in the new AR River Trail System committees (of which I am a member).

Thanks for bringing this issue up for discussion!