Heart Of The Ozarks In The Heart Of Town

When the rain stopped Wednesday afternoon, I was more than ready to get on the bike, but with the streets wet and a few stray showers still around, I decided to go for a little hike. Diane got home as I was readying to go, so she joined me for a little stroll from the end of River Road near the quarry along the North Little Rock River Trail. Hidden from view in a gap in the cliff face is a trail up a fern lined ravine through which a small wet weather stream falls. Once on the trail, when the sound of running water drowns out the sounds of traffic, it is easy to believe that you're far from the city. 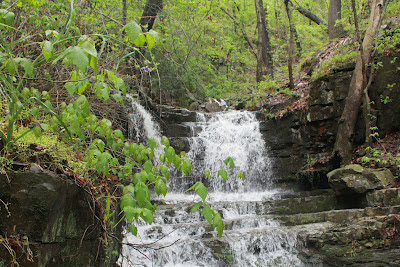 This spider wort was thriving along with the poison ivy. 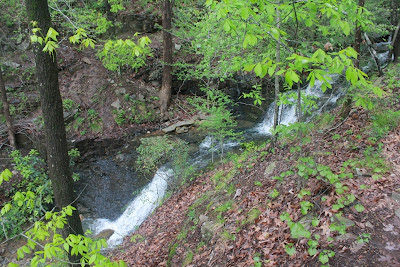 These were two of a series of three falls near the top of the trail.

The trail is easily followed, though steep and a little slick when wet, but it's easy to give in to the temptation to climb down to the stream bed below for a different perspective. I'm sure that most of the time it would be fairly easy to climb up the creek, but we had a pretty good flow. Of course, the little waterfalls are why we were there. 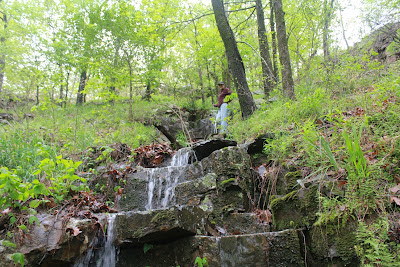 This side stream made effective but very slick steps.

This little gorge is tucked between the River Trail and Fort Roots. In between the industrial remnants of the quarry and the VA facility is a neat little microcosm of green. The old ruins of the quarry machines and structures add some interesting shapes to the area and also deserve exploration. 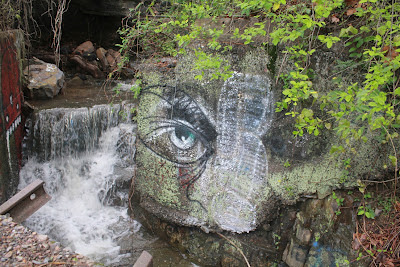 Sometimes when exploring the wilds it's possible to discover ancient temples or shrines. I think this is a temple to that most powerful god, KRYLON. 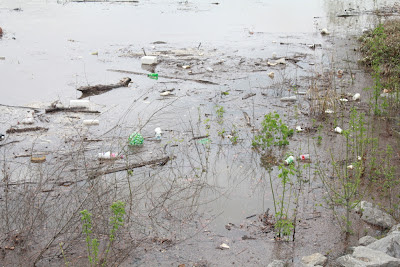 This is where roadside litter stops on its way to the beach. 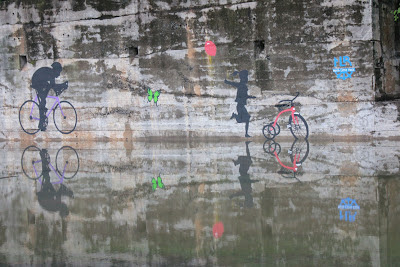 A portion of the mural by artist VL Cox reflected in a pool of rain water.

There are many little havens like this around town, some that I know about and I'm sure many that I don't. It's fun to get out and explore your own backyard from time to time.  It's a pleasure to enjoy a little walk in the Ozarks 10 minutes from home.
Posted by JBar at 10:11 PM

I recently tried to ride down the trail you hiked-up. I am healing up nicely and only have a faint scar left.

I told Diane that I was going to post this on Nerd mail as a newly discovered mountain bike trail. She said, "Somebody will get hurt."
Of course, I'm thinking, "no, they're too smart to try it."

Jbar we had to run up that trail when the South central Xterra championships came to town in 08, it was breathtaking in more than one way! A Local MTB biker that also owns a bike shop claims he has successfully road down that trail. I guess it happened before youtube was around