CARVE Kit Hit
If the number of new CARVE kits spotted out on the trail over the weekend is any indication, the CARVE Kick Off party was a roaring success! The kit looks good. Another new jersey design that is frequently spotted is that of Spokes, which may soon rival the popularity of the Arkansas Cycling and Fitness kit. Spokes has a sharp, clean logo and they are currently working up a new kit design that should be really nice. The ACF kit is a long-time favorite and it's not unusual for me and several of my riding partners to all show up in ACF style. The fact that it is offered in a sleeveless model makes it a winner for Arkansas summers. I think that folks like the look of a nice store or team jersey, but many of us feel like pretenders suiting up in pro team colors,so it's nice to see more local style options. I go for function, fit and fashion in that order. Of course, I expect all three!

What's a rider to do? River Mountain at Cantrell Road 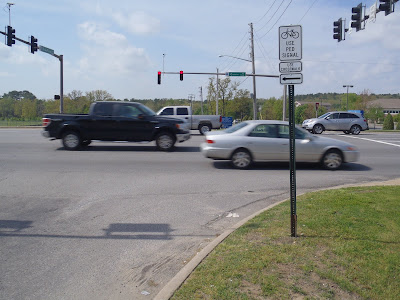 This new sign advises cyclists crossing Cantrell to Rodney Parham Road from River Mountain to use the crosswalk.

This is the site of the tragic death of cyclist Marilyn Fulper , who was struck by a motorist who ran the red light. This light is notoriously short and I think I'd feel safer crossing the road legally as a vehicle in a recognized traffic lane than crossing 6 lanes in the crosswalk, where one risks getting caught on the median for the many minutes long signal cycle.  I believe that somebody's well-intentioned idea creates more danger than it alleviates by putting cyclists heading south on the wrong side of the road and in an area where motorists would least expect them. I'm not sure if the expectation is that cyclists will walk their bikes or illegally ride in the crosswalk, but I've never seen a pedestrian in this crosswalk and don't expect to see cyclists use it. 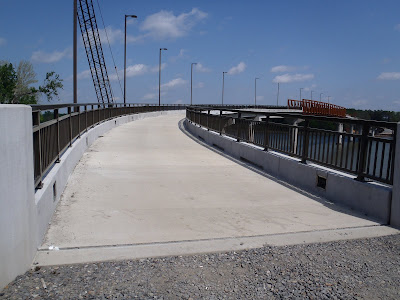 The bridge deck looked narrow during early construction, but as it gets closer to completion, it has the familiar look and scale of the BDB.

The Two Rivers Bridge is close enough to completion that I'm itching to ride it! I'll have to put out the word to the powers that be that I'm available for a test ride. It is going to be so nice to be able to easily hop out west!

Ok, now I'm stealing lyrics to describe my post-crash condition, but a lot of friends have inquired about my recovery.
My first  day back on the bike took place appropriately on April 1, four weeks after my injury. Since then, I've been on the bike for 8 of 11 days and feel like I'm getting my mojo back, even if fitness remains elusive. According to my log, I rode 564 miles last March and 20 miles in March 2011, so that's to be expected and things get better every day. The mountain bike is a tough proposition but I'm building mileage on my road bike as I am able, managing a little over a hundred easy miles last week. Nothing hard, but better work than the lounge chair I'd been riding.

Dog owners have been warned repeatedly to pick up after their dogs on the BDB. I think that Pulaski County Judge Buddy Villines has been reasonable and fair in his attempts to get folks to clean up their act or lose the privilege of being able to walk dogs on the river bike/pedestrian bridges. While riding today, I came upon dog owner and good citizen Nancy Elliott. Nancy had set up a sign and a small table and was asking for signatures in support of keeping the bridges open to dogs. 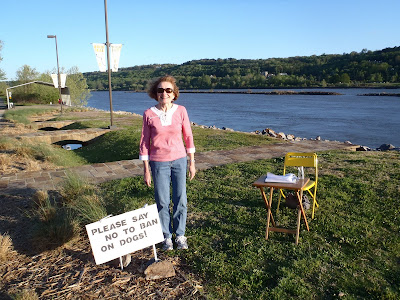 Nancy Elliott at her post on Monday, gathering signatures in the hope of convincing county officials not to ban dogs from the BDB.

As a dog lover, I'm sympathetic and always love to see dogs out and about, but as a trail user, I can certainly see plenty of evidence to support a ban. It's unfortunate that, as with irresponsible users of any public asset, the irresponsible pet owners are likely to force otherwise unnecessary rules on to everyone.


And it was windy enough to blow dogs off of leashes....

I'm usually pretty observant of the weather and typically check local wind conditions before heading out on the bike. I avoid Harper's Loop when the wind is whipping across the Grand Prairie, but I was caught out slightly Monday evening when I decided to go down to the trail for a spin and possibly a couple of hills. 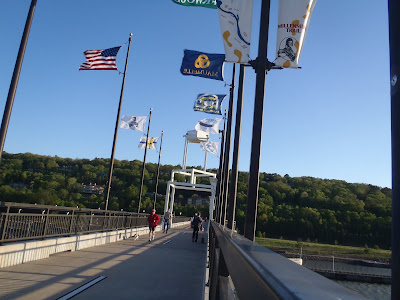 The flags were straight out and snapping in a northwest wind of 25 MPH, gusting to 39, on Monday evening. That's about as stiff a blow as we see here outside of thunderstorms.

I immediately abandoned any Fort Roots ambitions when I realized the the ride up to the bridge from the sub was going to be a lot like a 7-mile hill climb, plenty of work for me in my delicate condition. My average speed was improved on the downwind leg!
Posted by JBar at 9:47 PM

The sign is the cheap answer to the problem of a very short light at a very busy interchange.

The best answer would be a bike signal button that engages the signal green for a few seconds longer, but that requires AHTD and Little Rock spend money on cyclists safety and needs, which isn't likely (in my humble and probably misinformed Arkansas expat in Texas opinion) going to happen.

With the traffic mess they have created with all of those lights in a short area West of I-430 on Cantrell the city and AHTD aren't going to do anything to slow traffic on Cantrell. You can add this to the list that includes having to use the sidewalk in front of ECS and cutting across 4 lanes of traffic on Cross street just feet from a blind turn off of Cantrell in order to reaccess the River Trail.

I have taken to just driving down to the river trail rather than risk crossing Cantrell on my bicycle. I regularly see cars zoom through the red light while waiting to drive across in a pickup truck. I just don't go until cars stop in every lane, which does not leave enough time to get across on a bicyle as opposed to with a V8 engine. A search of the Pulaski County Clerk court records shows that the driver who killed Marilyn entered a plea bargain. One year of supervised probation, a $500 fine, 40 hours of community service, and complete a "Share the Road" course. Just not much concern out there for the safety of cyclists.

I was told this evening that a rider visiting Little Rock was struck by a vehicle on Cantrell near Cathedral School yesterday afternoon as he tried to navigate to the River Trail from his downtown hotel. His bike was knocked into oncoming traffic and smashed and the rider, as I understood, went to the ER, but was back on the job today.

I haven't seen anything published about a car vs cyclist accident, but I'm not surprised at it happening in that area.

I've almost been hit in the entrance to Cathedral School by someone turning off Cantrell that obviously didn't see the cyclist on the sidewalk about to be in the drive. When coming back down Cross Street to get back on the RT I cross over in the lane closest to the sidewalk and hug the curb as soon as I can rather than exposing myself to trying to cross 4 lanes of traffic when a car can come zooming off of Cantrell and hit you before they even see you. If the business at that corner would just build a little ramp from the sidewalk down to the entrance to their loading dock then you could get on the sidewalk, but without that it's a fairly good drop down.