Many of you ride the same roads and trails that I do, so you may have already noticed some of the things noted below; however, when I see improvements in local bike infrastructure I feel compelled to take notice and give credit where credit is due.

This area had been a mess as a sewer line was installed along these roads, but the roads have been rebuilt with  bike lanes and nice, wide traffic lanes. The plan is to eventually have bike lanes from Two Rivers Park to Pinnacle Mountain State Park. It is great to see what sounded like a pipe dream only a couple of years ago becoming a reality. 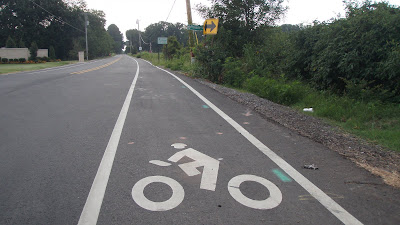 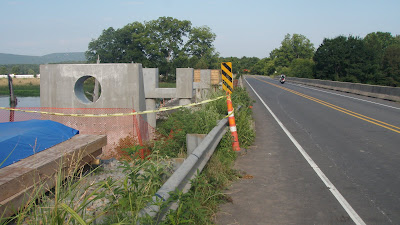 This structure's primary purpose is to carry a new sewer line over Little Maumelle Creek along Pinnacle Valley Road. A little foresight on the part of Pulaski County allowed it to also carry a bike and pedestrian bridge. This photo was taken July 5. The deck was added this past Tuesday, according to a county official.
Two Rivers Bridge

The bridge is well ahead of schedule and will likely be open next June. The next major step is the placement of the steel center span (mistakenly described in an earlier post as 292 feet in length, the span will be about 210 feet long). A landing has been placed on the Two Rivers side, but the major construction and materials staging will continue to take place from the Little Rock side.

North Little Rock
Responding to input from trail users, North Little Rock Parks and the streets department have added striping and signage in the area of the wooden bridge near the Burns Park boat launching ramp to enhance the safety of riders and walkers. 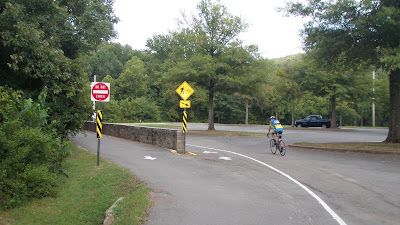 New signs and striping direct eastbound cyclists to the right of the wall when approaching the wooden bridge. Limited sight distance had made this approach to the bridge dangerous when cyclists chose to go to the left of the wall. 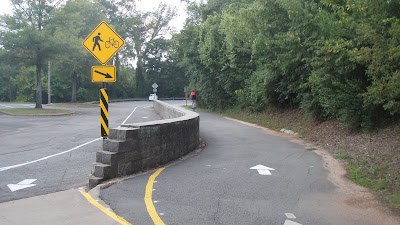 Westbound riders are also directed to keep to the right.
North Little Rock continues to look forward in planning bike infrastructure while responding to suggestions from the community with enhancements to existing resources.
Little Rock

Gotta love Little Rock politics. Can't offend the Dillards or the Stephens, so we'll not finish the trail.