Moving On and Moving Up

Rolling Like A Locomotive!
Just last week I was railing about the poor planning and slow progress at the site of the culvert cave-in at River Mountain Park, then I commented positively on the pace of the work once it got started. Well, all I can say is that you don't want to stand in the way of moving trains!
While park and trail users complained for months over the delays in repairing the access to Two Rivers Park and the River Trail at River Mountain Road, once the Little Rock and Western Railroad got involved, work proceeded at a remarkable pace. Last Sunday evening, this site was just a large excavation, busy with heavy equipment. 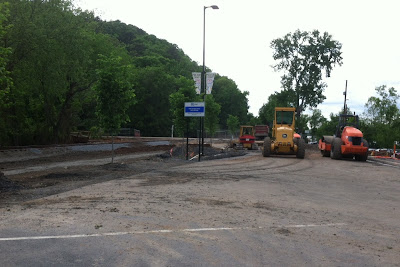 By Wednesday, the tracks were back in place and the finishing touches were being put on the fill over the new culvert. Trail user may make some noise, but railroads make money! 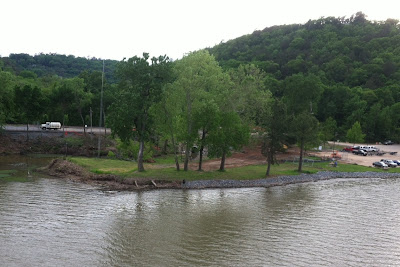 This view from the Two Rivers Bridge shows the discharge of the newly-placed culvert.
Work that was predicted to take nearly a month has been near-completed in just over a week. Now, if only the February weather would move on, park users and commuters could go back to springtime business as usual. I'm not sure of the timing for the road to be re-opened, but it would not surprise me if it was open as I write, given the rapid progress of the last few days.
Moving on up! We're 37th!
In most endeavors, finishing in 37th place would not garner an exclamation point, but considering that Arkansas was ranked 50th last year in "bike friendliness" by the League Of American Bicyclists, 37th ain't so bad. This year's report card is probably a more accurate reflection of where Arkansas stands than was last year's. Though there have not been a lot of real change as of yet, Governor Mike Beebe has become engaged, a statewide advocacy group is being formed, a consultant has been contracted and there is a much more progressive attitude showing at various state agencies.
I believe that the 2012 application was completed with a "glass half empty" approach by our then AHTD bike-ped coordinator; the application was likely accurate, but most such applications posture to show things in the best possible light while ours seemed weighted a bit to point out shortcomings. That is not to be construed as implying that the application was purposely negative; just that the coordinator was perhaps holding Arkansas to an idealized standard and he saw plenty of room for improvements that were not being addressed.