Tim and Vanessa McKuen's bikes were stolen. Let's be on the lookout for them, including you Craig's list shoppers. 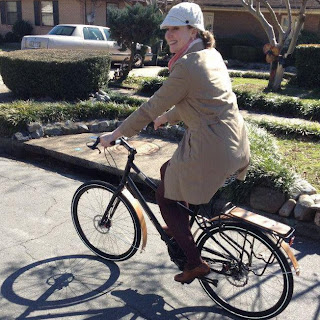 This is a stock photo of a Damocles in the red, white, black paint scheme.
Here's info from Vanessa:

It is just the most awful feeling to loose a bike. I hope you don't know it, but if you do, I'm sure you know what I mean. So, I don't have a pic of tim's bike but it is a Red, white and black Ridley Damocles with SRAM Red shifters, SRAM Force crank and derailleurs, Mavic K10 wheels, Oval bar, system and seatpost. Fizik saddle, Speedplay Zero pedals and Arundel carbon cages. My bike (photo attached is a black Civia Loring with bamboo fenders, Brooks saddle and a back rack. I actually have footage of the guys that stole them. They are pretty young and I doubt that they know much about bikes. They probably don't realize what nice stuff they have, but maybe they'll try to take them to a shop if they can't pawn them or don't just ride them or ditch them. Right after they stole the bikes, they rode over to Big Daddy's pawn shop on 12th street where they tried to pawn my camera, the only other thing they took. They were turned down, so they went on their way, but I got the footage from Big Daddy's security cameras. We filed a police report and I've given the police footage, but I don't get the sense that this is a high priority for LRPD.

Anyway, I so appreciate you guys getting the word out to the bike shop/riding communities. Please have anyone with info give me a call at 501-920-7735. Tim is in the midst of finals this week, so probably better to communicate with me.

I'm so sorry. I've had one taken as well, and it is an awful feeling. Hope you get them back!

Vanessa's bike has been recovered! I hope it leads to Tim's bike as well.