From The Committees: Working on Your Behalf

I try to make it a point to attend meetings of the various advocacy groups and bike related committees in Central Arkansas. I am on the North Little Rock Bike Friendly Community Committee (BFCC) and attend meetings of the LRBFCC and the Arkansas River Trail Task Force as an observer and "cyclist at large". I'm a BACA member and sometimes sit on on board meetings, as well.
I try not to be a pest and I actually do feel like I contribute a little value; if nothing else, I'm a bit of a common denominator and and can let one group know if another has already addressed an issue or developed information that is mutually beneficial. All of these groups have slightly different missions, but all are working toward the goal of enhancing cycling in Central Arkansas. Here's a short update on some things coming out of their activities:

BACA: The viability rating of Bike Advocacy of Central Arkansas has had its ups and downs over the last few years, but seems to be thriving under the current leadership of president Judy Lansky. Judy is an energetic recruiter and is not hesitant about pestering folks into cooperation.  At the recent general meeting, a new slate of officers was elected/drafted, to include:


Judy Lansky – President
Mason Ellis – Vice President
Diane Barton – Secretary
Bob Graham – Treasurer
Patrick Hays – At Large
Mikie and Cal Clift – At Large
(John Gillum and Chad Cragle will continue to serve another year)
These folks represent a range of backgrounds and interests within cycling and are set to help continue the progress that has been made over the last few years. Diane is serving as Secretary, so I'll have to weigh my words carefully should I choose at some point to criticise the minutes-of-the-meeting. Former North Little Rock Mayor Pat Hays brings his extensive knowledge of central Arkansas government and a wealth of political savvy to the board. Pat is not sitting around in his retirement as he, along with Judy and Diane on the board, recently completed League of American Cyclists  instructor training (LCI).

The recent meeting featured a range of guest speakers including Jim McKenzie of Metroplan discussing the Broadway Bridge project and plans for the Highway 10 west corridor, Rob Stephens of the Arkansas River Trail Task Force on new signage standards for the ART System, Willa Williams of NLR Safe Routes To School on recent LCI training sponsored by the City of North Little Rock and other activities taking place north of the river.
McKenzie has taken a very aggressive stance with the AHTD regarding accommodation, or lack thereof, of cycling and pedestrian needs as they move forward with the Broadway Bridge and with studies for reconstruction of highway 10 west of I-430. Of the AHTD, and I risk paraphrasing here, that he feels that they do a great job of planning and constructing high speed rural highways, but that they impose those same models on urban infrastructure to the detriment of cycling and walking opportunities.

ART Task Force
This committee met recently and among the business discussed was the approval of standards for signage throughout the ART system. The sign styles will include wayfinding signs with directional arrows and mileage to key features such as the BDB, mile markers, and route markers. 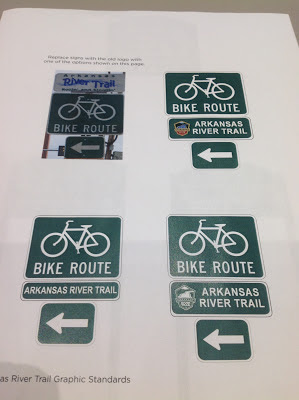 The example at the upper left is an old-style ART sign. The other three are examples of the new-style signs approved by the AHTD for use along highway portions of the Arkansas River Trail System. 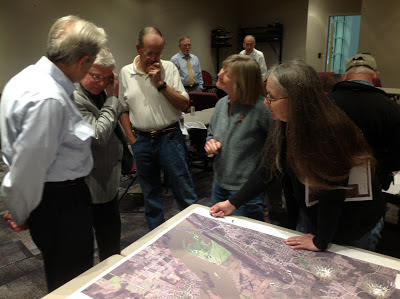 Arkansas River Trail Website
The ART Task Force has been behind the development of an extensive website for the Arkansas River Trail System at http://arkansasrivertrail.org/
In addition to a lot of information and maps on the trail itself, the site includes information concerning upcoming events, some of which may involve trail closures.

There will soon be a form for event planners to use when applying for use of portions of the trail for runs, rides, and other events. This will provide a single point of contact, as many activities overlap the jurisdictions of cities, parks departments, counties, the Corps of Engineers, etc, etc.

While the stated purpose of these groups is to advance the cities' goal toward gaining League of American Bicyclists Bike Friendly City designation (Little Rock) or going for a higher level (NLR bronze to silver), meeting the requirements for the designations requires real improvement. Both groups are doing good work in terms of shaping streets policies, gaining infrastructure, and educating folks on the benefits of cycling. As an example, NLR recently sponsored LCI training that resulted in 16 new League Certified Instructors. The new LCI's included a couple of NLR School District coaches who are an important component on efforts to bring bike education to the schools. On a recent Saturday morning, more than 50 kids, along with their parents, turned out at Crestwood Elementary to be fitted with new helmets and learn the basics of safe cycling from program coordinator Willa Williams and the newly minted instructors. That is exciting stuff! Educate the kids and educate the parents and soon we may have a whole new generation of cycling advocates.

Many of you are just interested in riding bikes and I'm cool with that, but the people who share their time on these committees, whether as volunteers or as part of their jobs, are the key to why cycling has such a large and growing presence in Central Arkansas. Projects like the River Trail don't happen overnight. They can take decades of hard work and persistence to become a reality, but the results can forever change the face of our community for the better.