JBarCycling can 't be depended upon as sole source for cycling event information--there are simply too many good things going on for this simple working man to keep up. I do, however, gladly pass the word when informed!

Here are a few upcoming events of interest:


Tour De Rock June 1: This is likely the second biggest cycling event in Central Arkansas, following the BDB100. It's not too late to get on board and knock off some prairie miles for a good cause!

I wanted to invite you to an event coming up on June 20th at 6:00 on the LR side of Two Rivers Bridge. We will be dedicating one of the bike fixit stations that have been purchased by the Marilyn Fulper Memorial Fund. Marilyn’s sister Becky and Marilyn’s daughter Mersey will be there to say a few words to the group. We will also be installing a plaque like the one pictured below. This fund is supported by money raised at the Wampoo Roadeo coming up on July 20th. So far we have placed stations located at the bathrooms in Two Rivers Park, the Two Rivers Bridge and under the Main Street Bridge in North Little Rock. I have another station that will be placed on the LR side of the Clinton Bridge.
The Fixit stations get good use along the River Trail. The only downside is that vandals cannot seem to leave them alone, though there is little of value to steal. It is unfortunate that gifts to the community are compromised by the sheer meanness of a-holes.


Gearhead Triathlon: June 16
Gearhead Outfitters in Jonesboro is holding a sprint Tri!
If you're one of those folks who enjoys swimming to the start of your bike race and then running away from the bike as fast as you can, this could be fun for you. 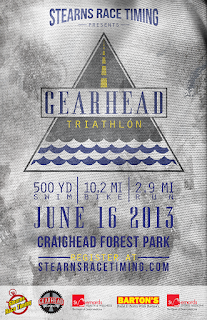 Wampoo Roadeo: July 20th (See Marilyn Fulper Fixit Station dedication above)
Flat metric century. I had a pesky cast on my arm at the time, so I drove the course as a SAG guy last year. It was a nice route and a well-supported ride. Proceeds go right back into our community, so get on board!
Posted by JBar at 10:49 AM