Last week was National Bike Week and that meant that cycling was front-and-center in the mainstream media. I guess that's why I was a slug about getting anything posted! That's going to be my excuse, anyway.
One of the highlights of Bike Week for me is always Bike To Work Day. Since I work from home, that means that I get up earlier than usual, join Diane's convoy downtown, hit the news conference, and the proceed to the Capitol Hotel for a very fine and free breakfast. 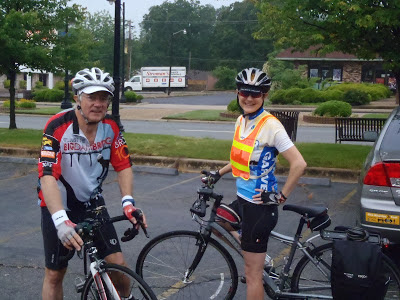 A forecast of rain cut down on the numbers in our convoy. Former NLR mayor Pat Hays joined Diane and I for the ride downtown from Park Hill. 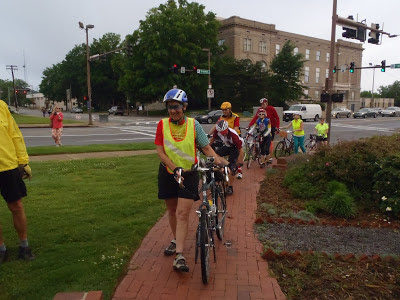 The threatened rain did not appear and the convoys rolled in to the press conference in the rose garden at Markham and Broadway. 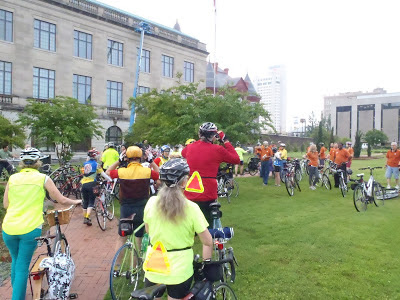 By the time the TV cameras rolled for a few words by Metroplan's Jim McKenzie, LR Mayor Mark Stodola. and NLR Alderman Charlie Hight, a large crowd had gathered. 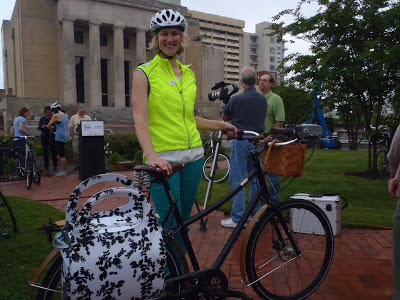 Vanessa McKuen was particularly stylishly and practically outfitted for a bike commute. 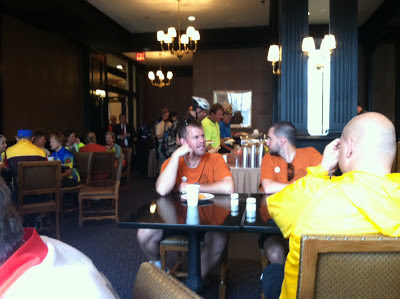 Cyclist and Capital Hotel manager Michael Chaffin once again welcomed us to the hotel for breakfast. Drop by for lunch sometime and you can valet park your bike! Thanks go out for the gracious hospitality and great food!! 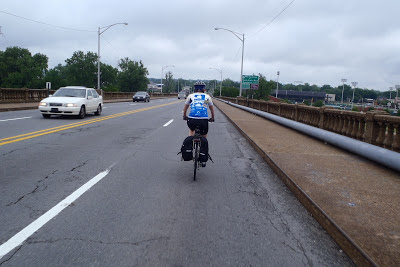 I was not a day of frivolity, as we did actually have to go to work!! Diane shown here crossing the Broadway Bridge on her way to Garver as I headed off to make my Friday morning conference call.
Bike advocacy and the acceptance of cycling is going strong in Central Arkansas. I'm amazed at the many fronts on which efforts are being made to promote all aspects of riding.
Even will all of those efforts underway, I believe that one of the most effective ways that we can create acceptance among non-cyclists is to simply let people know that you ride a bike. I don't mean that we should all smugly brag about our mileage and fitness, but I think that when our friends and business associates know that the riders they see out on the road are not just some spandex-clad weirdos, but that they are the weirdos that live on their block, approve their bank loans, or fill their prescriptions, they will be more likely to pass safely rather than lay on the horn.
Go forth, spread the word, and ride safely.
Posted by JBar at 12:36 PM

I know your type, free breakfast and your down ;=)

Thanks John for a great article. We all need to work together to change the culture to acceptance of bicycling and development of bicycle facilities. We've come a long way, but we still have much to do.

Guess what? This is exactly what major companies are paying me for. They need to know what their customer needs and wants. So large companies pay millions of dollars per month to the average person. In return, the average person, like myself, answers some questions and gives them their opinion.