I've been slower than usual about getting my mountain biking season started this year, but I'm gradually getting into a little groove. For the sake of transparency, I must admit that the road bike is my default ride and I don't head to the woods until winter sets in and it becomes more comfortable on the single track than on the open road. The closest mtb venues for me are Burns Park and Camp Robinson, and I've generally had a preference for Camp, but last winter saw trail closures, clear cutting, controlled burns, and the ravages of heavy equipment across large swaths of TA-2, the location of the CARP trails. At the same time, the trails at Burns Park were being rehabilitated or rebuilt, making them flow much better and rendering them more sustainable by eliminating some of the steep trail sections where erosion had been a problem. Ironically, much of the lead on the Boy Scout Trails as they are known, is credited to Bert Turner, of the Central Arkansas Master Naturalists, along with the North Little Rock Parks Dept. and a range of volunteers. It's ironic because Bert was a Boy Scout and helped build the original trails back in the 60's. "We didn't know much about building trails, then." Bert related in an exchange a while back. They know quite a lot now, and the trails are the better for it.
Currently, the Burns Park trails on higher ground are in really good shape and are a lot of fun to ride. The red trail from the trail head parking lot (near the freeway over pass up the hill from the covered bridge) has become my favorite for the moment. The low ground, as in the yellow trail behind the covered bridge and the green trail behind the BMX track, are often muddy for long stretches of time. Therein lies a shortcoming of Burns Park; it really doesn't have a lot of reliable trail miles. That said, it's easy to expand your range of options by riding up to the nearby Pfeiffer Loop for a couple of laps or by heading down to Emerald Park for some climbing. I enjoy those alternatives, along with the fact that I usually run into friends scattered along the River Trail or in the woods, and I especially enjoy seeing folks this time of year when afternoon rides are short and darkness limits sociability among passing riders.
Camp Robinson: Trail Fairies At Work

There have been a few more riders using the Camp Robinson trails of late, with multiple vehicles in the parking lot each time I've ridden there. There has also been a lot of work going on out there by the elusive trail fairies; reclaiming, rerouting, and rehabilitating trails damaged or obscured by last year's timber harvest and controlled burns. When you ride your favorite trail, wherever it is, enjoying the clean, packed surface and rolling along with no low limbs or encroaching briers grabbing at you, whisper a little thanks to the trail fairies. 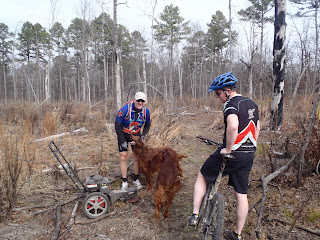 Basil Hicks and Bryan Shipman have been at the heart of the trail building and restoration at Camp Robinson. 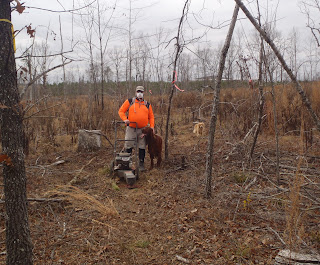 Basil Hicks III, shown here trying to conceal his identity, but sniffed out by the pack o' dogs. Adam Taylor was also whacking brush somewhere back in there.
A big thanks goes out the these guys, along with Bryan's lovely and charming wife, Melissa, who has packed a leaf blower across a few miles of trail, and Lane Septon. They all regularly put in time working at Camp. Bryan has ambitions to blaze a loop consisting of perhaps Yucca, the new Turn, Turn, Turn, Airport and 10 Bridges. It would overlay the existing trail system and make it very simple for riders new to Camp Robinson to embark on a 4-5 mile loop of beginner level trails without a map and without the risk of getting lost. 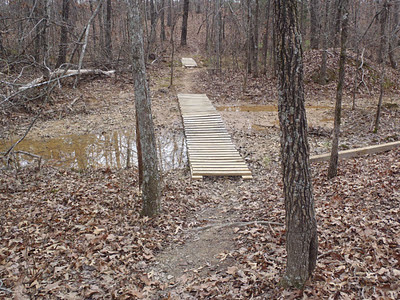 I may need to promote Bryan from trail fairy to Constructobot. He found these bridges in the clear cut and dragged them to where they were needed on 10 Bridges Trail. Very manly. 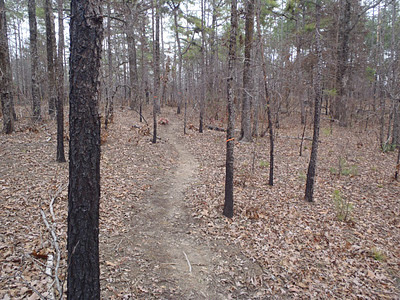 Many of the trails at Camp Robinson have been cleared of leaves and are in really good shape.
Bryan and Melissa have succeeded in reconnecting the remnants of 10 Bridges Trail across the clear cut area after having previously helped in the rerouting of Yucca around a large stretch of wet ground. 10 Bridges is one of my favorites due to the way it flows and I'm glad to have it back. I've ridden at Camp several times over the last few weeks, riding Airport, 10 Bridges, Turn, Turn, Turn, Outer Loop, Port-o-Potty, Yucca, and Buddha, most of those them more than once. I haven't gotten around to other favorites like Ball-O-Nails, Can of Corn, and Merlin, nor have I bitten off Advanced Trig or suffered up Elevator yet this season. And there's the beauty of Camp Robinson. There are more miles of trail than a mortal can ride in a day and the range of difficulty covers everything from beginner to "too damn hard for me"(but I'm working on 'em) stretches.
The most frequently uttered statement from people who haven't visited Camp in a while is, "I forgot how good it is." , but for many folks, our wealth of other convenient trail resources on both sides of the river make Camp Robinson not worth the hassle. It is an underused resource and is being kept viable by a few folks. It remains to be seen if it is sustainable.
You can keep up with Camp Robinson developments on CARP's Facebook page.
Posted by JBar at 6:54 PM

Still amazed that none of these guys want any help with repairing/trail maintenance.

We do. Who says we don't? I usually make note of things that need to be fixed as I ride and then make an effort to fix it then (if I can) or the next time I ride. I love when I hear of others doing the same. If you are waiting for an invite from CARP, well that's probably never going to happen. If you ride at Camp, give me a shout and I'd be glad to hook you up with some work. What TA2 needs now more than anything is riders and especially riders who conduct trail maintenance as well as ride.

Just go on out and ride at Camp and take care of the little things you run across. A lot of trail maintenance can be done without tools; moving fallen limbs or setting a couple of rocks to harden a wet spot, and it's easy to carry some hand pruners in a Camelbak. If you're more ambitious, blowing the leaves off of a stretch of your favorite trail improves things immensely.fgadfly Shipman can hook you up if you want some direction on areas needing work. It's easier to just do some work than to organize a work day, so the efforts at Camp are pretty autonomous.

I really don't like the leaves blown off the trails. Aren't those decomposed leaves the trail base for the future? To me it causes worse erosion to blow them off. Just my 2 cents. If you ride over a hidden rock, just stop, go back and pitch it to the side if it's loose. That's what I do.

Mark, the problem with the leaves at Camp is that they can totally obscure the trails, especially when they are as lightly used as they have been, making it very difficult to stay on the established paths. There have been many times when I've just had to stop and start looking for tape markers to determine where the trail lies. Camp is mostly hard pack with very little in the way of erosion problems and the trail fairies work to harden or bridge frequently wet spots.