Dillard's Trail Section
Most readers are aware that Little Rock's bid for a federal grant to construct the spectacular River Bluffs trail section along the Arkansas River behind Dillard's corporate headquarters failed. The word is that the City of Little Rock intends to proceed with planning for a less expensive, and possibly more functional for cyclists, alternative. A bridge would be built to cross the Union Pacific tracks west of the Medical Mile downtown trail section and would then be connected to some arrangement of bike lanes along Cantrell Road. I'm certain that there will be some hurdles to this plan, but some money is in place and at least a plan seems to be taking shape. More on this as time goes on, but I'm glad to hear that the project seems to have some impetus.

Big Dam Bridge
Work continues to progress on the west ramp of the Big Dam Bridge, with what I consider to be a milestone coming last week. Some horizontal steel went up as the first beams for the ramp were placed. 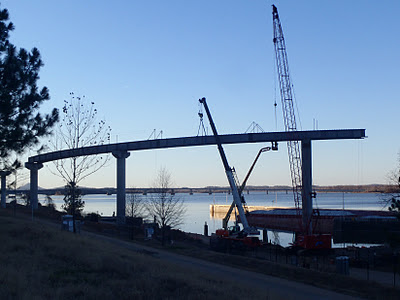 It will start looking like a bridge soon.
Having watched the construction of the Big Dam Bridge and the Two Rivers Bridge from start to finish, the raising of the west ramp of the BDB doesn't carry the same level of anticipation, but it's still fascinating to watch the project progress through its various phases. 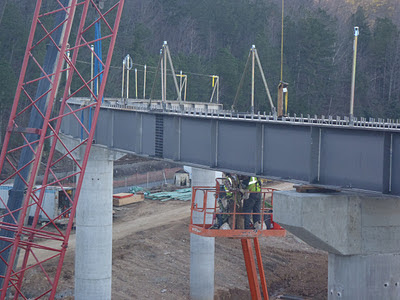 The guys on the lift were taking the steel cross plates for the ramp from the crane and setting them in place. 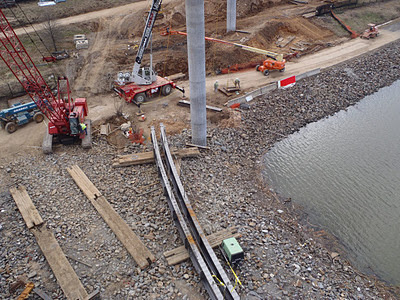 These beams will likely have connected the ramp to the BDB by now. They had been placed at the ready Friday afternoon at quitting time.
By next fall, the Bag Dam Bridge west ramp will be complete and the plaza area at the foot of the Two Rivers Bridge should be done as well. They will connect nicely.
When the Two Rivers Bridge was closed last week for repairs to the lighting system, I had a chance to visit with John Burton, Pulaski County Surveyor and the project manager for the Two Rivers Bridge. He was surprised at how many Two Rivers users were not aware that the trail connected it to the Big Dam Bridge and beyond. He suggested it as an alternative to the many people showing up to walk Two Rivers and, as we spoke, an energetic gentleman walked up to thank John for directing him toward the Big Dam Bridge and to ask, "how far could I go" once past the BDB. "As far as you want to go", was the correct answer.  Another walker asked directions for crossing the Two Rivers Bridge and doing a loop to the BDB and back. By then, John had decided that some additional signage might be in order.
Posted by JBar at 9:23 PM