Diamond Bear Brewerey/Pub
As I wrote my mention yesterday of the proposed Diamond Bear move to NLR, I dropped a note to Russ Melton, president of Diamond Bear. Russ graciously responded with word that the project is moving along and that groundbreaking can be expected fairly soon. I would imagine that setting up the systems for a brewery and restaurant requires more attention to the details than plopping a chain store into a mall spot. Here's to them, and I look forward to my first Presidential IPA at the River Trail location.

The Apartments Formerly Known As Longfellow Arms will now be called Riverside at Rockwater, according to an article in Sunday's Dem-Gaz. 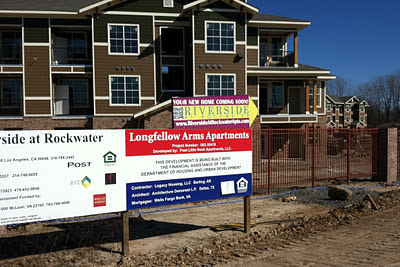 It's a welcome change, as I was never sure whether the Longfellow Arms moniker was more reminiscent of "Beverly Hillbillies" or "Sanford and Son". I could have easily imagined Fred telling Lamont , "I've spruced the place up to give it some more class." Lamont,  "Gee, Pops, it looks the same. What did you do?" "I changed the name from Sanford Arms to Longfellow Arms and raised the rent $10.00 a week."
On the other hand, Jethro, attired in a leopard print smoking jacket, could have proudly recounted to Uncle Jed , "Since I got in the movie mogul business, I took me a suite (Pro."sute") at the Longfellow Arms so I'd have me a place for my Hollywood starlet casting couch. A mogul has got to have a casting couch.".
If you are too young to be familiar with "Beverly Hillbillies" or "Sanford and Son", then I'm envious.
More Marina Info
The Rockwater Marina has a total of 136 slips planned and a budget of $3.6million. The $1 million grant and 25 slips referred to earlier is for the portion serving transient recreational vessels, as I understand. I guess the many of the high-rollers from Riverside at Rockwater will need a slip for the cruiser and I'd much rather see this kind of development right in the heart of town than adding urban sprawl along the river somewhere else.

All of this development will require some changes to the traffic patterns in the area. Work is underway to extend 3rd St to serve the Rockwater project and River Road will eventually be closed to motorized traffic. I haven't a clue of the plan for vehicular access to the marina, but I'm sure things will become clear soon enough.
Posted by JBar at 7:35 PM

NLR has their shit together, LR needs to take note...before they lose anymore businesses and any flavor that's left.