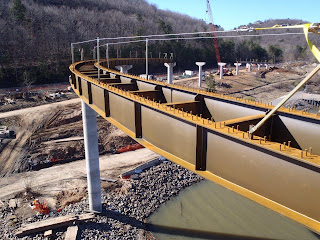 BDB West Ramp. Most of the steel is now in place.

My posts (and rides) have been limited over the last few weeks, but that doesn't mean that there is not a lot of news affecting the cycling community, much of it involving infrastructure and most of it very positive.

Camp Robinson Rail Spur
This can be described as old news due to the fact that it has been sitting in my "in" box for way too long. From NLR Alderman Debi Ross on 11/21:

"It's official, the papers were signed today between the City of North Little Rock and Union Pacific RR for the purchase of the Levy RR spur. It is now in the hands of the city to begin revitalization in the area!"

I reported on this back on August 7, but until the papers are signed, nothing can be certain when dealing with entities like a railroad and a city government. Follow the link above for details. I'll seek updated information on development plans, but I expect this project to move forward rather quickly due to the fact that the rails and ties have been removed from the rail bed, leaving a graded gravel surface that should lend itself to a relatively easy transition to paved trail. Debi first mentioned the possible acquisition of the RR spur to me a couple of years ago and, along with Mayor Hays and others, she has kept her eye on the ball to bring this important bike and pedestrian route development a giant step closer to becoming a reality.

This item has appeared in local media but it bears repeating here. A federal grant of slightly over $1 million has been announced to support construction of the Rockwater Marina along the NLR riverfront west of the Baring Cross RR bridge and near the Rockwater/Longfellow Arms residential developments. The marina will have 25 slips for use by transient recreational boaters and will be able to accommodate craft up to 70 feet in length. This will mean more construction along River Road, but will ultimately add character to the River Trail.

Diamond Bear?
I've had no recent news on the progress of Diamond Bear Brewery in making their move to the area, and the last word I got was that the initial cost estimate was over budget but still in planning.

Riverfront Road/ Cottondale Road Grade Work
Bids were taken on January 17 for revisions to Riverdale levee street crossings. The work will impact the area around Riverfront and Cottondale Roads in Little Rock. 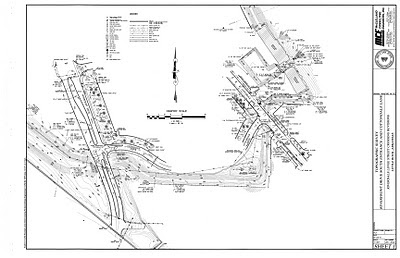 I have no post-bid information, but I would expect the work to take place over the summer. The bid documents address maintenance of traffic flow during construction, but don't specifically address use by cyclists. I would expect some disruption, but we should be able to bypass the area.

In a future post, please lay out how traffic on the ramp on the west end of the BDB extension, traffic on the ground trail, and traffic coming east off the bridge over Jimerson Creek will merge.

It surely helps to have good representation when looking to buy a home.