More on the BDB100: Rouleurs and Strollers

NLR Leadership on a Roll
I was remiss in not mentioning this in my earlier post on the subject, but when it comes to bike advocacy, there are several folks in North Little Rock city government who do more than talk the talk. They ride the bike! Mayor Pat Hays and NLR Parks Director Bob Rhoads both rode the 104 mile distance, while Alderman Charlie Hight rode the 68 miler. 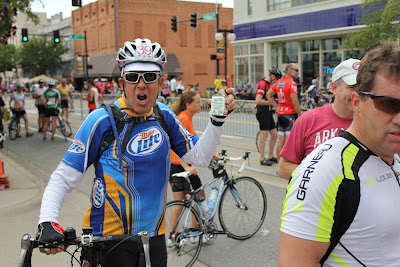 Charlie Hight was very enthusiastic about his wholesome post ride chocolate milk, while also promoting a Miller product for his day job at Harbor Distributing.
Taking nothing away from Charlie or Bob, I've got to show some admiration for the Mayor. Bob is a long-time roadie and Charlie elected the shorter distance so that he could make the Arkansas-Alabama kick-off (too bad about that result!). Mayor Hays went all in. I believe that it was his first century and I know that the hilly route was much harder than his favorite ride on the pancake flat Harper's Loop. It was a long day on the road for him, but he stuck it out to the finish. Good job by all! 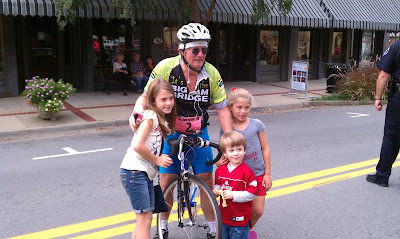 NLR Mayor Pat Hays is greeted by his grandchildren at the finish. A well-earned reward for a long, hard day in the saddle. photo by Bud Laumer
I didn't come up with a picture of Bob Rhoads, but we've chatted some recently about his riding "back in the day". The man has got some history on the bike and can still turn a crank.
Now, about all of that hill walking...
By all reports, every major climb on all of the routes, including Wye Mountain, Fortson Road and Batesville Pike, saw large numbers of riders off of the bike and hoofing it. I'm certainly not belittling anyone, but I'm curious about the phenomenon. Yes, there were some hard climbs, but I've heard surprising confessionals from strong riders who admitted to taking the stroll. I think there are a several classes of walkers:
- The "step up to a challenge rider": these are the folks for whom this ride is about as hard as anything they've ever done on the bike. They accepted that they were at the limit of their current ability and that if walking was what it took to finish, then they were going to walk. Frankly, these folks had a much harder day than many of us and they are to be commended.
- The "lemmings": It's OK, everybody is doing it!  I'm only poking a little bit of fun here, but many of these riders would never have stepped off of the bike if there had not been a parade of walkers strung out on the hill in front of them. All of that company made it acceptable, whereas if they had been surrounded by merciless friends like mine, pride would have never let them put a foot down. As Diane's dainty riding partner so succinctly stated to her on Batesville Pike, "I'll f'ing die before I walk that hill.", and up they went.
-The "intimidated by a sign" riders: apparently there was a sign on Batesville Pike warning of "steep climb next 4 miles" or something to that effect. I spoke to several riders who were so disheartened by the prospect of such a daunting climb that they gave up before they ever started. To them I say, "Don't believe everything you read." It's usually not as bad as your worst fears.
Climbing is a mindset. Once doubt sets in and resolve is broken, the legs soon follow. I'm not much of a climber, but so far I've managed to finish what I've started, often with more whimper than roar. I will admit to having danced on the side of a steep street near home at the end of a long, hard ride, dealing with screaming leg cramps while eying the top of a hill temptingly within easy walking distance. It took a couple of tries to get my leg back over the bike, but I remounted and squeaked up the hill. I'm not the toughest guy around and my day will surely come, but I just couldn't bring myself walk it. Of course, I didn't have another 25 miles of ride in front of me!
Joe Jacobs had a nice write up on the BDB100, and includes some interesting demographic information:

http://arkansasoutside.wordpress.com/2011/09/26/get-over-it/
Joe does a very nice job. After you read his BDB article, click on "home" to check out his more recent work. Good stuff!
Posted by JBar at 8:10 AM

Email ThisBlogThis!Share to TwitterShare to FacebookShare to Pinterest
Labels: BDB 100

Thanks for the shout out John.

I think there may have been one more cat of walkers. One that I almost joined. As riders reached the top of one of the tall hills they started bunching up waiting for friends or taking a breather or both. This caused some vehicular traffic to come to a grinding halt. Trackstanding on that hill was not a lot of fun and I came close to putting a toe down. I remember at one point i saw a pickup stop in front of me and almost grabbed the tailgate. It was a interesting ride.

I have NEVER seen so many people walking their bikes--most with their shoes off. I suspect many of the 50 milers who had little real cycling experience were very disheartened.

JBAR, you know what they say about Chocolate Milk? "Taste Great and Less Filling" Wait a minute, that's what they say about Miller Lite too! I'm not sure what class of rider I fell into but it's one of those you listed above. I did however complete (more like survived) the 68 mile route in a respectable time and was able to grip a cold one when I got back.

Charlie, I thought the milk shot would help polish your wholesome image.
And Joe, I heard stories about the entire lane being blocked by walkers, forcing riders into the oncoming traffic lane....or into a stall! I can't trackstand for squat, so I would have struggled.
I hope the postive feedback outweighs the negative on the routes, because I thought they were great!

It's nice to see so many of our NLR city officials getting out there on the bike, congrats to them for finishing some tough rides. If we could get them to pave the shoulder on North Hills between I-40 and downtown that would make me one happy commuter, but I digress.

I was out of town and didn't get to ride the BDB this year. The 68 mile loop looked like it would be a beast for the unitiated. I have done some rides that include Batesville Pike and Fortson Road back to back. Never walked 'em but I know they'll break your heart if you don't know what you're getting into.

Thank G for JBar's awesome reporting! :) whenever I'm sick of hearing about how the world is going to end from mainstream news, I can come here and smile as I read about mayors riding centurys.