City Of Little Rock: Signs of Progress on the South Shore

I recently had the opportunity to visit with Little Rock Assistant City Manager Bryan Day. It was a bit of an accident of scheduling that I met with Bryan, as he was originally going to meet with Sam Ledbetter to discuss street/trail maintenance issues along Rebsamen Park Road as viewed by cyclists. Sam and I had scouted and discussed what we felt were some threats to rider safety so I volunteered to fill in when Sam could not make the scheduled meeting.
We were not setting out to resolve any of the big problems, such as the LaHarpe/Cantrell trail gap, but we wanted to show Bryan some problems that we felt could be addressed with existing resources. It turned out to be a learning experience for me and, hopefully, Bryan was able to gain some insight as to the needs and views of at least a segment of the cycling community. We started at the intersection of Riverfront and Rebsamen Park Roads where the bike path ends. Some recent utility work had resulted in the effective narrowing of the trail as some dirt and large rocks had been left on the margins of the trail. We felt this represented an unnecessary hazard to riders and walkers as sight distance is limited, west bound riders are coming off of the road and east bound riders are trying to assess traffic in both directions as they leave the trail and cross multiple traffic lanes at a fairly complex intersection. I learned to my surprise that the utility work was being done in preparation for the construction of a traffic circle at that location. So much for my being in the loop! 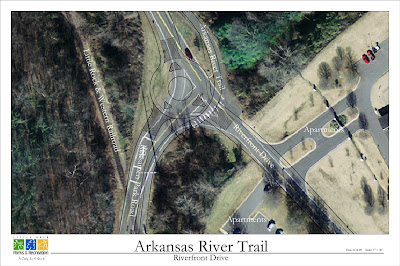 The overlay shows the location of the planned traffic circle and extensions of the bike lanes on Riverfront Drive.
In addition to the roundabout, the bike lanes on Riverfront Drive will be extended a few hundred feet to the east. As I understood, the bike lanes will not extend all the way to the existing bike lanes, which will still leave a few hundred feet of shared single lane road. I would hope that will be addressed, as that particular westbound stretch is fairly narrow and is divided by a median, preventing drivers from moving to their left when encountering cyclists. I typically just take the lane to force drivers to slow for the few seconds it takes me to pass through.
The other things we discussed were general maintenance problems like patching potholes and trimming back brush. After some input from cyclists, the bike lanes and path have been recently swept and some of the major pot holes have been filled, but hazards remain, mostly in the form of long, narrow cracks or pot holes which are difficult to effectively patch. The road has not seen resurfacing in many years and as a result there is an accumulation of patched utility cuts, poorly executed repairs, and deterioration at the seams where the road meets the separately paved shoulder/bike lanes. In addition, the white side lines are of a material that looks like some sort of reflective ceramic that is beyond its useful life and that flakes off in shards that can easily cut a bike tire. The bottom line is that the road won't get much better until it is resurfaced. Bryan was candid in saying that any street resurfacing would likely have to wait for the recently passed sales tax increase to provide a funding stream, but that he would attempt to make this a priority. I'm certain that since Little Rock has been unable to do any street resurfacing in recent years, there will be a long list of "priority" projects, so I suggest we take a realistic view of a timeline. It's on the radar.
I appreciated the opportunity to visit with Bryan and he was very positive about Little Rock's efforts to become more bike friendly. He asked that cyclists report specific problems to his office or by dialing 311. I've had mixed reports on the effectiveness of the 311 service, but would be interested in how it works. Would someone like to call in their favorite Little Rock pot hole to 311and let me know if it gets fixed?
I know that the Little Rock Bike Friendly Community Committee has been working hard toward earning Bike Friendly status with the League of American Bicyclists, and the City has been responsive. With the funding provided by the sales tax and what seems to be renewed interest on the part of the City of Little Rock, I think we'll finally see some very positive cycling related developments on the south side of the river.
The elephant in the kitchen...
The elephant in the kitchen, of course, is what I've fondly referred to as the Moronic Mile. That gaping hole in the River Trail system has been the biggest target for criticism of Little Rock's commitment to cycling infrastructure. I don't want to go too far beyond my specific knowledge, but the general consensus is that the completion of the trail from downtown to Riverdale has been effectively blocked by Stephens (Cathedral School) and/or Dillards interests. At this time, Metroplan has been given the task of seeking a Tiger Grant to fund a plan that would route the trail behind Dillards along the river. Given the current political climate, I would not make a bet on the grant being approved and the project would still need cooperation from Dillards for the right-of-way. An article in Friday's Democrat-Gazette reported that a public hearing on the matter had taken place on Thursday, including the presentation of an ambitious design that runs along the bluffs behind Dillards HQ and the Packet House. According to the Dem-Gaz, Metroplan has $592,000 in federal funds and $148,000 from Pulaski County to complete engineering and environmental studies. I question the wisdom of spending that much money without at least tacit approval of the plan from Dillards, but I can be naive about the politics of such things, and the fate of this trail section is certainly all about money, politics and the influence of a few powerful local figures.Let's hope that the interests of the community are served. By the way, the "elephant" has been given a more attractive name. The proposed trail section was referred to as the "River Bluff" trail section. Very nice. Let's hope that it happens. I'm already tired of the "Moronic Mile".
Posted by JBar at 1:03 PM

311 calls for potholes or other non-bike related fixes in little rock work great. i call them all the time and they get the job done quickly.