The Energetic Rider: Trying To Do It All...

....and failing, of course, but a big Saturday, nonetheless!
To start the day, the CARVE Ride.....
It was a clear, cool morning when I had a quick breakfast and left the house in time to make the short ride down JFK/Main St. to join the 7:30 CARVE ride at the sub. A pretty big group of probably 30 or more riders rolled out for the loop east of town, and when we finished up a couple of hours later, I had ridden 45 miles. The pace on the winter CARVE rides are pretty civil, but I wasn't done and needed to prep for round 2, so I rode up to the Argenta Market and refueled with a half-pint of pasta salad (very good, by the way!) and a banana. After second breakfast, I headed back to the sub to meet the next ride. 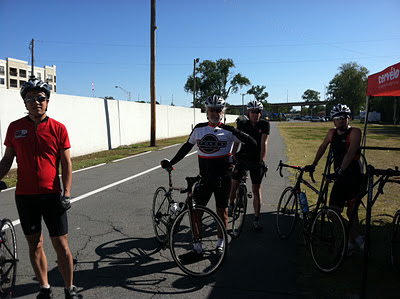 Cliff Li, Virgil Young and two mystery riders ready to ride out on Cervelo R3's.
The Spokes and Cervelo folks were getting pedals mounted and bikes fitted up for their second demo ride of the day when I arrived a little before 11:00. I had the opportunity to ride an R3 a few weeks ago, so I just jumped in with this group on my own bike. We rode up the River trail, over the BDB and out through Two Rivers Park to Pinnacle Valley Road. The trail portions of the ride were kept to an easy pace, but once out on the road, these guys wanted to test the bikes, so the speed picked up and there was always some smart-aleck rocketing off of the front. This ride was about 25 miles and we got back to the Spokes portable world HQ near the sub around 1:00.

...and then the after-party at Spokes
One of the reasons I wanted to  poach on to this ride is because there was a post-ride party at the store at which they were drawing for a world champion jersey signed by current champ Thor  Hushovd. I managed to ride home, grab a shower and a third breakfast, fetch Diane, and still get to Spokes by 2:00 in order to take my chances on what I now considered to be "my Thor Hushovd signed world champion's jersey". Spokes really does a good job most of the time and I've been impressed at how much a part of the cycling community that the store has become in less than a year, but I must say they did a lousy job on the drawing. 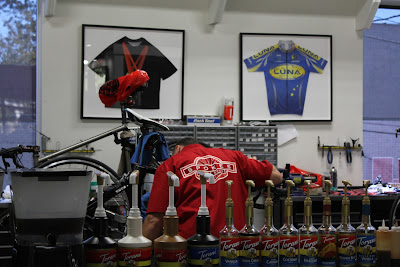 The coffee bar at Spokes allows customers to enjoy their refreshments while supervising the hired help in the shop. Here, Mat appears to be squaring away his S5 after letting it go on the ride without him. 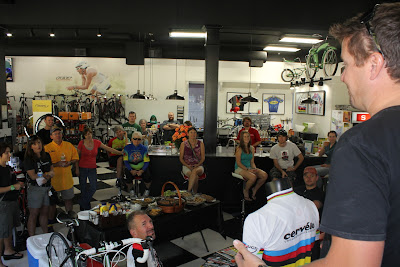 Jeremy, the Cervelo rep, prepares to draw for the coveted jersey. Everything from bike shorts to shop aprons had already been given away before the awaited moment. 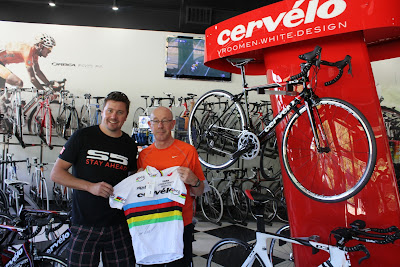 And, as had been the case with every other prize, I was shockingly NOT the lucky winner! The real lucky winner shown here, Gary Fowler, was delighted!
Mat and Regina Seelinger of Spokes, along with Steve, Scott, Adam and the rest of the crew, really know how to be hospitable. There was a big spread of good food and plenty of swag give-away to complement the usual congenial atmosphere. Mat told me early in their operation that his goal was to be known as the friendliest bike shop around. That's a good way to earn some business and it seems to be working for them.
...and then I had to cook dinner!
By the time we left Spokes, I felt that I'd already had a full day. Eighty-something miles on two separate rides, three breakfasts, and an afternoon social were on the books when Diane reminded me that I was cooking pork tenderloin for dinner. My work is never done.
Posted by JBar at 9:52 PM

I'm the mystery rider on the far right. :)

Cool! Always glad when a reader gets in the scene!

what is the safest way to ride to spokes from the river trail?

It's likely time-of-day dependent, but I'd say cross Cantrell at Cedar to Allsopp Park. Take the paved trail from the back of Allsopp Park. It ends in the church lot at Cedar and Kavanaugh, then just go east on Kavanaugh. Neighborhood locals may offer a better plan.