The North Little Rock Parks and Recreation Department has created the post of "Park Ranger". With over 30 parks and thousands of users, whose interests range from tennis and soccer to cycling and fishing, there is certainly a need for such a post. Details of the ranger's role are still being defined, but the ranger has been hired and I recently sought an opportunity to meet with her.
Kate Finefield is our new ranger. She is a Little Rock native, graduated from UALR with a degree in wildlife biology, has worked for such entities as Audubon Arkansas, A.D.E.Q., the Arkansas Game and Fish Commission, and as a field biologist for the Natural Heritage Commission.  Kate is genuinely excited about her new job as the only city parks ranger in the state and, after visiting with her, I'm excited about her new job, too! 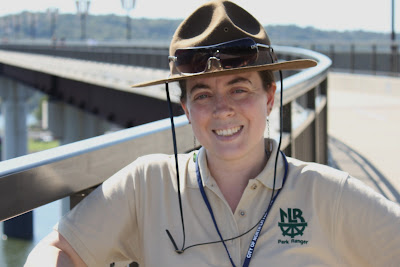 Kate Finefield, North Little Rock Park Ranger. I asked Kate to pose on Pulaski County's BDB as it is an iconic representation of the River Trail, just as her Smokey Bear hat is an icon that says "Park Ranger".
I met with Kate and her supervisor, Project Coordinator Jeff Caplinger, on a recent sunny afternoon in order to discuss the ranger job position and to try to get some personal insight into the first holder of that position. I had actually run into Kate earlier in the day as I grabbed lunch at the Argenta Market. She was on a similar mission and recognizably attired in her NLR Park Ranger shirt, so I introduced myself and firmed up our meeting for later in the day. My first impression was that she is confident, approachable and friendly, all good attributes for someone whose job involves making contact with the public from a position of authority. Kate lives in a rural area along with her husband, 5 dogs, a collection of mostly rescued "mutt" goats, a mess of cats, a mini-donkey (I'm taking her word on it!) and about 50 chickens, so I think it is fair to say that she has a soft spot for animals, which reinforced my initial positive impression.
I'm probably a poor interviewer, as I tend to simply get engaged in conversation, but I did get in a couple of question and answer exchanges. When I asked Finefield what had attracted her to the job, she didn't hesitate. "This is the job that I went to school for. I wanted a job that put me in a position to be outdoors and to educate and inform people." Her previous jobs all had some of each, but the NLR Park Ranger seems to have found a position with a job description that she could have written to define her dream job. 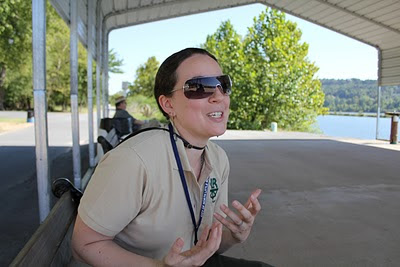 Ranger Finefield's enthusiasm is apparent as she discusses to possibilities of her new job.
I also asked Kate about her cycling experience, and she responded that she had used a bike for transportation while living in downtown Little Rock, but that her current home location doesn't lend itself to riding. A self-described tomboy, Kate participated in track and field and volley ball, though her ambitions to play football were quashed by her parents. She loves being outdoors and recognizes that she will be serving a broad constituency of parks users. At this time, her hours are divided between patrol and office duties while she works with city authorities to fully define the role of the ranger. There must be some changes made by ordinance to empower the position and define its areas of authority. In the meantime, Finefield will undergo some training with the NLR Police Department, whose members she describes as extremely supportive. Ultimately, Kate sees the primary duty of the park ranger to be that of educating, informing and helping the public understand how to share the many resources that fall under the purview of the NLR Parks and Recreation Department, but she will also have an enforcement responsibility. She believes that initially she will spend a little more time with enforcement than will be the norm. There are few serious problems in the parks, but some folks have taken a lack of enforcement for granted in such areas as alcohol consumption, parking on playing fields, and littering, for example. As ordinances are being updated to define the ranger job, discussions are being held on a fairly wide variety of topics. These range from horse poop on trails shared with mountain bikers to tobacco use in the parks. Some of these issues may be addressed by ordinance while others with simply fall to policy positions. Most of the parks rules simply codify consideration for others, and once the public understands that the rules will be enforced, it is likely that most of Kate's time can be devoted to helping people appreciate and enjoy the spectacular  NLR parks system. 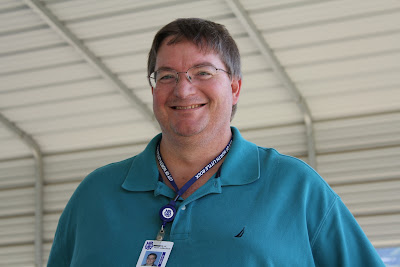 Jeff Caplinger, Project Coordinator, is Ranger Finefield's immediate supervisor.
Jeff Caplinger has been with Parks and Recreation in the City for 7 years, and he is very pleased to have Kate on board. Along with parks director Bob Rhoads, Jeff is working to get Kate equipped with the tools she needs to perform her duties, including legal authority, training, and equipment.
When I think of NLR Parks, I think of the River Trail, but Jeff reminded me that our ranger will have much more to cover. It is almost certain that she will have a bike and access to some sort of ATV to patrol the River Trail and other "off road" areas and, when the newly proposed off-road ATV park was mentioned, the tomboy perked up and said, "I told them I need a dirt bike."
Posted by JBar at 11:06 AM

One of things I've always loved about Arkansas parks opposed to Colorado, California etc is the self policing and freedom...Kate seems like an awesome person and I'm happy for her in the new position, but I don't really see a need. If I knew the penny tax was going to go towards making parks more of a police state I would have voted against it.

I can't disagree with your position on self-policing and freedom, as I feel that most folks want to do the right thing and be considerate of others; however, there are always individuals who are not so considerate or who simply don't "get it". I see the ranger job description as heavy on education and encouragement and an alternative to the possibility of more police presence. The result remains to be seen, but I'll hope for a positive one. As for the penny sales tax, that was Little Rock and has no bearing on NLR's hiring of a ranger. We have a vote coming up on a similar levy in NLR.

Thanks Jbar for taking the time to do the interview and post this. Great job.