My young friend Alex Bumpers, along with Garrett Phelps and others, have been recruiting mountain bikers from among their classmates, with support from Chris Randle. This is 15-year old Alex's initiative and his goal is to form a juniors mountain bike race team for Catholic High and attract other juniors to mountain biking. Pretty ambitious! I came across them Thursday night near the Pfeiffer Loop as they gathered for a workout and some fun and games. Maybe it's because feel like I missed out on a lot as a kid for a number of reasons, but it just delights me to see these guys out riding, racing, getting fit and have a blast doing it. They are the polar opposite of the image of today's youth being overweight underachievers. They warmed up on Pfeiffer loop and then I think they did a time trial loop before setting out cones for a slalom drill. Spokes also provided Chris with a big bag of water bottles, cages, and other swag to serve as prizes. 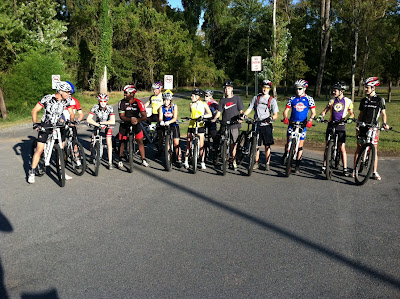 The teens are lined up, along with Chris Randle and Scott Penrod, for a Thursday evening of mountain bike race training, drills and games. I know several of the young guys, but was impress with their numbers and the fact that there were several girls in the bunch. 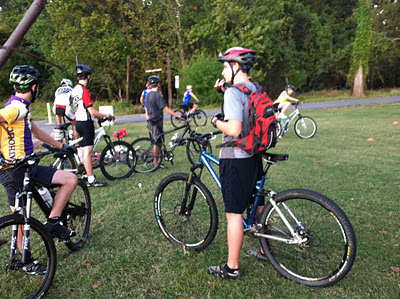 They were still working on the methodology, but the orange cones were set up in a dual slalom pattern to allow riders to go head-to-head. The fun thing about this arrangement is that the crowd can see (and laugh at!) every move. Judging from the crashes, putting the course on the grass was a good move.
Some of these young folks are experienced and capable riders, while others are just learning the basics, but all of them were enthusiastic and having fun. There is a lot of youthful talent around and people like Chris, Scott and Ernie Lechuga are helping them with training and logistical support. This bodes well for the future of cycling.﻿
Note: My apologies for the poor photo quality. Some dirty thieving SOB rifled my apparently unlocked truck and relieved me of my pocket camera.
Notes to self:
1. Don't leave valuables in truck.
2. Lock truck.
Posted by JBar at 7:21 PM

Wow nice blog i just love this you check latest mountain bike on your budget for rides check on https://www.firstlightcycling.com/best-mountain-bikes-under-1000/