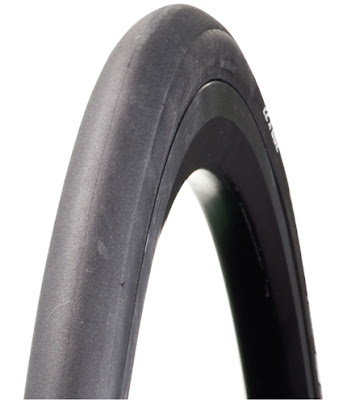 Three-hundred and thirty feet. A little more than the length of a football field. In the big scheme of things, 330 feet isn't all that far, but how many bike races are won by less than 330 feet? I'd say most of them. 330 feet is the distance that a cyclist covers in nine seconds at 25 MPH. Nine seconds is the time that Bontrager claims their new R4 Aero tires will save in a 10K time trial. Nine seconds would be a huge split among competitive athletes in a 15 minute race. Bontrager has added AeroWing sidewall profiling that is intended to provide continuity at the point where the tire meets the rim in an effort to smooth airflow and I'm sure that they can produce reams of data to back up their claims.
Manufacturers continue to refine their approach to bicycle design and aerodynamics research has become more and more the realm of recreational and race equipment manufacturers. We see TT improvement claims for everything from handlebars to water bottles, spokes to seat posts, but how do these claims pan out in the real world? It's hard to tell, because the testing, by its very nature, is done in a very controlled environment in order to isolate the performance of the component in question. If the data was absolute, a guy who lost a 20k time trial by 10 seconds last week could change his tires and win by 8 seconds next week, but it's not so simple. The smoother airflow off the tire/wheel combo may reduce the benefit of an aero downtube. What happens in a cross wind or if one rider rocks his machine more than another? And you can throw most of the aero test data out the window when it comes to road racing, where most of a rider's time is spent nestled in the pack, unless, of course, you happen to be Fabian Cancellara.
It's all interesting and it's mostly relevant, but I'm going to stick with my Conti GP400's for now. I'll maintain that position until the buddy I beat last week starts riding away from me on his new Bontragers.