Along The Trail: Razorbacks at Dickey-Stephens Park

The Arkansas Razorbacks hot baseball team played Louisiana Tech in front of a sold out crowd at Dickey-Stephens Park on Tuesday, May 11. It was the baseball Hogs' first game in the Little Rock area in 22 years and, with the enthusiasm for the program at a high, the game was a total sell-out with over 10,200 tickets sold. Actual attendance was around 9,500, compared to the park's previous attendance record of about 7,500 for the inaugural Travelers game there. I dropped by on the back side of a Fast Girl ride, watched few pitches through the fence at Hook Slide Corner and took a few photos. 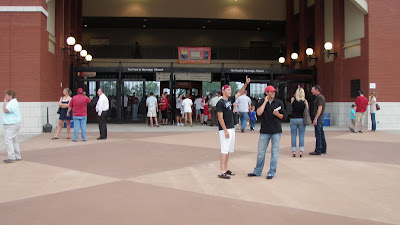 Tickets were hard to come by as this guy found out. The game was already underway and several fans were still seeking tickets. 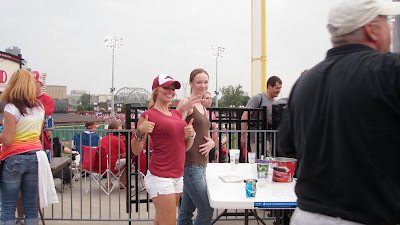 Unlike tickets, beer was easily had and served with a smile if you were on the inside of the fence, which I wasn't. 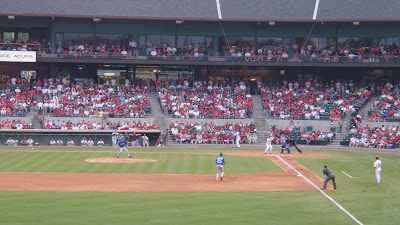 The Hogs had some trouble early on as my man Bo Bigham ran into a double play and  then LaTech scored 4 runs in the second inning.
The Hogs would chip away at the lead, with the game tied at 4 after nine innings, and then ultimately win the game 5-4 in the bottom of the tenth inning, giving the fans more than their money's worth.
This game became a big event for Central Arkansas and further demonstrates the value of quality-of-life infrastructure like Dickey-Stephens Park, the River Trail and the BDB. It was very cool to come off of the River Trail and head across the Broadway Bridge in a big group of riders with crowds of enthusiastic Razorback fans hollering and giving the "thumbs up" as we rode by. It's just good fun to have so many things going on up and down the river with our strings of parks and other amenities. And this was just a Tuesday night!
Posted by JBar at 10:59 PM