Trek has the Lance Publicity Machine, But Specialized Is Ruling The Road. 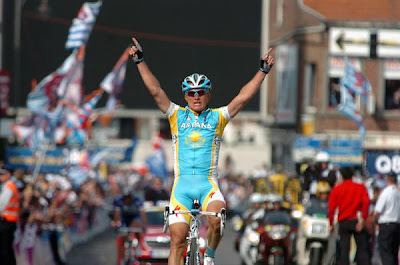 From Velo News.
When Lance Armstrong came out of retirement, the folks at Trek had to be dancing with glee at the prospect of the world's most marketable rider once again throwing his leg across a Trek Madone. Posters bearing Lance's likeness immediately went up in retail stores across the globe and dealers vied for the line that would be the bike of choice for so many casual riders, Lance wannabe's and serious cyclists who see Lance's association with Trek as a stamp of approval. Great stuff for the Trek brand, but how is it paying off so far?
Well, I don't pretend have any industry numbers, but based on the European pro race results, I'd say that Specialized has a big lead in the marketing game at this point. Trek has broad appeal in the mass market and will certainly get some bang for their buck, especially as we roll toward the frenzy that shall be this year's Tour de France, but banner-carrier Team RadioShack has been woefully short of results to date. Folks who buy high end road bikes DO pay attention to such things and the clear winner so far this season has been Specialized. By sponsoring both Astana and SaxoBank, Specialized has put their bikes under Alberto Contador, a seemingly rehabilitated but unrepentant Alexander Vinokourav, Frank and Andy Schleck, and the spectacular Fabian Cancellara. Between them, they have won most of this spring's European stage races and one-day classics, including the Tour of Flanders, Liege-Bastogne-Liege, and most importantly, Paris-Roubaix, where Cancellara's long solo finish gave the broadcast teams plenty of time to talk about the winner's Specialized machine with its vibration-dampening zerts and other features. Paris-Roubaix is THE testing ground for subjecting bikes and components to the brutality of the cobbles in the environment of a one day race, where an ill-timed mechanical is likely to come at the price of career-making finish, and cycling publications devote article after technical article to the stuff that works. The sponsorship of pro bike racing has got to pay off and Specialized is capitalizing on the positive buzz. I hope they are very successful.