While crossing paths with Bryan Shipman and Josh Joyce at Camp on Sunday, Josh stopped his bike suddenly as something near the base of a dead tree caught his attention. "There's a snake in there. Two snakes and they're hooked up." My first response as I saw the flash on movement was "speckled king snake", but I was proven wrong as Josh pointed out the two still-connected black snakes climbing the tree. 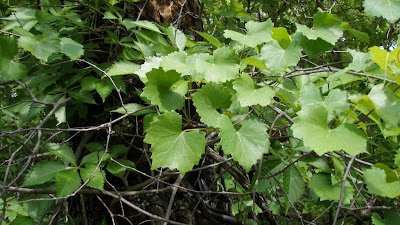 Click on the photo and look near near center at the bottom for the tangle of snakes. Josh had caught a glimpse of the snakes as they left the trail and headed to this tree. 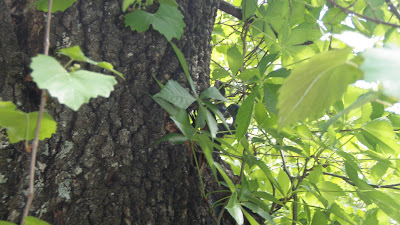 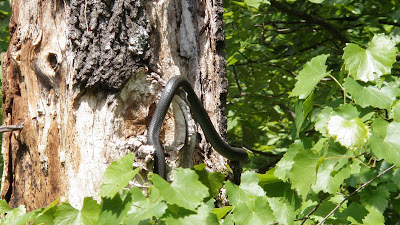 The black snakes made their way up the tree while still engaged.
Though I thought I'd failed snake I.D., I was soon redeemed. After circling the tree for a couple of minutes trying to get some good shots in what technically amounted to snake voyeurism, I happened to glance down. I had been carefully watching my step and was only a little surprised to see a large speckled king snake at my feet. 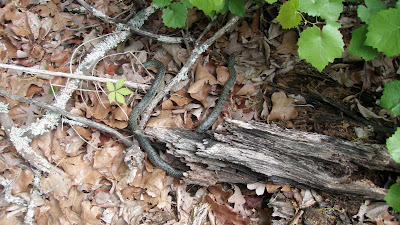 This guy seemed pretty much indifferent to my presence. 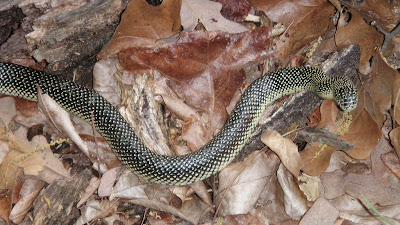 The king snake may have been what spooked the black snakes to begin with. Other snakes, including venomous ones, serve as prey to the handsome king snake. They also eat rodents and so are good to have around the yard.
There are snakes to be found all over Arkansas, most of which are harmless. Of the venomous snakes, the copperhead is the probably the most likely to be encountered  at Camp Robinson, but they are generally shy and impeccably camouflaged, so will likely go unseen. There are also timber rattlesnakes statewide and the terrain is perfect for them, but I have only seen a rattler a few times in my life, compared with many, many encounters with copperheads and cottonmouths. We spend a lot of times around hill-country rivers and creeks where snakes are just part of the landscape.

Here's a link a Game and Fish site that gives some good, concise information about all of the snakes found in our state.

Don't get too worried about snakes at Camp. I've seen many, many more just riding the River Trail on my road bike. The more immediate threat at Camp Robinson remains poison ivy, ticks, ill-timed flat tires and the usual over-the-bars adventures.
Posted by JBar at 8:52 PM