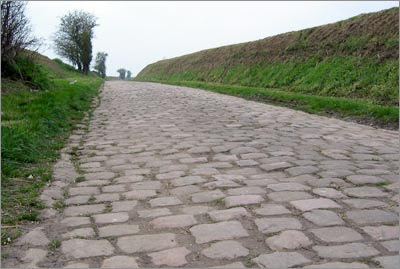 From PezCycling. Link to related article at bottom of this post.

Have you ever wondered why so many bikes, bike clothes, fabrics and the like include "Roubaix" in their names. Well, it's like "Baja" to off-road racing, "Daytona" to NASCAR, and "Kona" to Iron Man competitors. With all due respect to the Tour de France and the other grand tours, Paris-Roubaix is THE bike race to test the toughness, luck and will of every rider who rolls out from the start line, along with every frame, beefed-up box profile wheelset, every fork, seat post and bolt, and every double or triple-wrapped handle bar on every bike on the road.
Last week's Tour of Flanders was damn near as good as a one-day classic can get, with an amazing performance by Fabian Cancellara, who pulled away from three time winner and Belgian national champion, Tom Boonen, on the final 22% cobbled climb. After dropping Boonen, "Spartacus", as Cancellara is known due to his combative toughness, showed why he is the Swiss national champion and three-time world time trial champion by motoring solo 10 miles to the finish at about 35 MPH. Boonen had lost a minute to Cancellara's attack and never made up a second of it, while the chase group, which included a motivated and strong Lance Armstrong could only lose more time. To quote Boonen, "He just rode away and I couldn't follow him.".  Very few folks ride away from Boonen on on any road, much less on the cobbles of Flanders. To us sons of the South, it is akin to beating Br'er Rabbit though the briar patch.

Read about that race here:
http://velonews.competitor.com/2010/04/news/cancellara-conquers-flanders_110336

If you have never taken the time to watch one of these races, start now. It will be shown Sunday on Versus at 5:00PM. Set your DVR now!