The Argenta Market: It's A Big Hit!

As is Diane's routine, she headed out on this Saturday morning on her pannier-equipped commuter bike to do her shopping. Regular stops include the Argenta Farmer’s Market and Boulevard Bread in the River Market, with an occasional ride-through at Firewater Liquor, but today were special as it was the first Saturday since the April 15th opening of the long-awaited Argenta Market. She was pleased with the offerings at the market, and her stop there allowed her to pick up a few items such as bananas, which are among our staples but normally require a trip to Kroger. 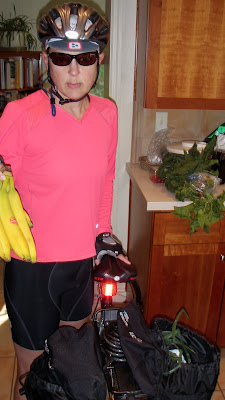 The market expands Argenta shopping opportunities, and Diane rode home with pepper plants in her back pack and her panniers bulging
with eggs and produce. 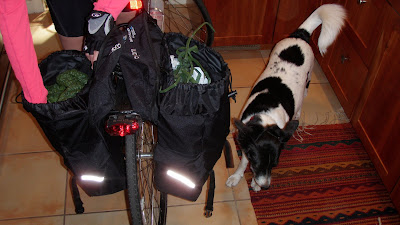 Willie seems to be expressing a little disappointment that Diane skipped the meat counter.
I moved a little slow this last Saturday morning and had limited road ride ambitions for the day, so I saddled up and cruised on down to see what the market was all about. All I can say is, the joint was hopping! As I rolled my bike in, one of my neighbors came up to hold the door for me, and I noticed Mayor Pat Hays enjoying breakfast at the first table. The dining area in the front of the store was buzzing with conversation and shoppers were busy in the aisles. 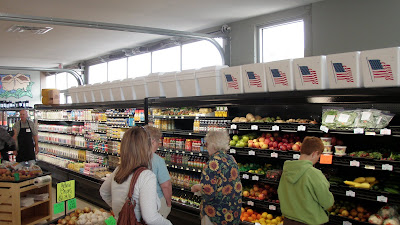 The produce and dairy areas seemed to have just about everything you might need, and I was told by the friendly store folks that we could expect fresh, local produce in season. "Anything they have at the farmer's market across the street on weekends, we'll have here.." 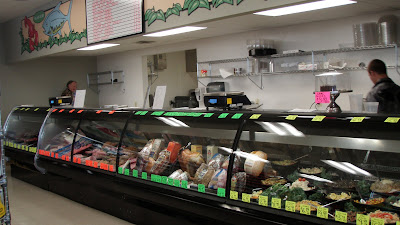 I was pleased to see a well-stocked meat counter featuring a nice selection of fresh meats, store-made sausage, and Petit Jean bacon along with deli meats, cheeses and more. 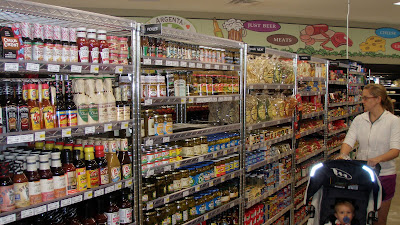 The store is not super-center sized, but how many kinds of Kraft BBQ sauce do you really need? Especially when Spicy Stubb's is right there on the shelf! 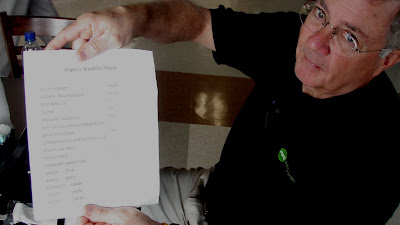 North Little Rock Mayor Pat Hays shows off the breakfast menu. The eggs Benedict came highly recommended.
Argenta is an anchor of the River Trail and for an area to truly become a neighborhood, it needs a grocery store. The Argenta Market looks like it has the potential to serve that need, as well as providing a community meeting place to enjoy a cup of coffee or a meal with friends. We live in the Park Hill area and we will be frequenting the market and know that several of our neighbors will, as well. Our closest options are to go to Indian Hills or Lakewood for groceries and I think we'd rather just head down the hill to the Argenta Market for many items. A bike rack was placed on the sidewalk by Sunday morning, promising a convenient and bike-friendly stop near the trail.The market has been a long time coming, but appears to have been worth the wait. Let's hope that the community supports it and that more local merchants will find their way back downtown.
Posted by JBar at 9:55 PM