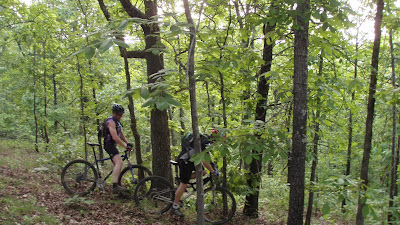 New trail at Camp: I'll describe it as raw, but with a promise of being really fun.
Last Wednesday evening, I took Bryan Shipman up on his invitation to join the CARP guys on their weekly ride and to help them break in a new trail. I didn't count riders, but there were 10-12 of us, I'd guess, and I had never really been on a mountain bike ride with a group that large, but these guys knew each other and the line of order sorted out easily. Out on the road, the pack can easily adjust to the abilities and ambitions of the riders, as individuals can easily move around, take a pull or drift to the back, or attack. On tight single track, you're pretty much stuck in your place unless you're willing to take some risks and likely piss off your buddies if you're just on a casual ride. I rolled out near the back so as not to be a stopper on the trail as we headed out to check out the new trail. We left the parking area on 5-Mile, then caught Zig-Zag before bailing off on the new trail, which serpentines down the hill before terminating near the west end of Merlin. It was very tight in places, like many trails at Camp, and in this direction was mostly downhill, holding some really steep switchbacks and a lot of off camber trail littered with loose, midsized rocks. On more than one occasion, I drifted off of my line, but that seemed to be a common occurrence on the narrow track.
There was some discussion on a name for the new trail. Bryan put forth "Escalator" because now "you can take the elevator or the escalator" to go up or down the hill. I suggested "Shipwreck" to recognize Bryan Shipman's efforts and because I felt like I could go crashing onto the rocks at any moment.  I'm a newbie at this trail thing and have no standing among the trail builders, but in whitewater, tough rapids are often named for the first pioneer to clean a line or for some poor SOB who had a memorable ass whipping in failing to clean the line. Bryan cleaned this line, so he can call the new trail whatever he wants! I'm just looking forward to trying it again.

Here's an image of the new track and its approach:

Here's a link to the image above and others, including elevation, on the CARP Facebook page:


And here's a link to a very cool interactive map on the CARP site:
http://www.olderascal.com/carptrails.html
Posted by JBar at 8:58 PM

While I think the feeling (of impending doom--that 'you will go down') will change with time, I think the trail will be known as Shipwreck. Melissa's comment was that the name should have some funny story behind it. As soon as I can get it added to the map, I will replace the one on the kiosk.

In years to come, somebody will wonder about the origin of the trail names and some geezer will spit, kick a rock, and say "Some ol' boy by the name o' Shipman built that one way back in the day.", and history will be served. If there are no good stories by the time the trail gets broken in good, we can make something up that is spectacular, has no basis in fact, and is impossible to check for veracity. I found it surprisingly ridable Monday night, so it's already shaping up.