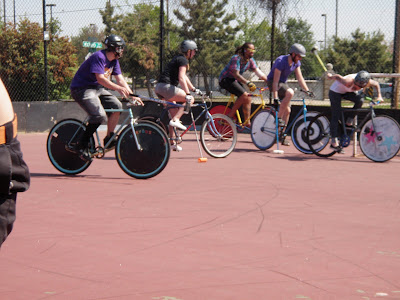 A few months ago, I ran across a website for Little Rock Bike Polo. I was intrigued and dropped a note to the contact to ask if they were still playing. There wasn't much on the site at the time, but both the website and the game seem to be doing pretty well based on what I've seen today. I never got a response to that e-mail and pretty well forgot about it until I heard a piece on public radio about a bike polo tournament taking place this weekend at MacArthur Park. By the time I came in from my road ride, Diane had already ridden over to check out the games and reported a good crowd, friendly folks and a lot of bike polo going on. I showered, ate a little and headed out to drive over with our dog pack, Willie and Zuli, in tow. The games are played by teams of three on the old tennis courts at MacArthur, with games lasting ten minutes, as I understand. You can follow the link below to learn more about the game. The closest thing to a standard bike set-up was a fixed-gear or single-speed, flat bars, platform pedals and home-made cardboard or corrugated plastic disc wheel covers, some of which were pretty artisitic. The discs would serve to protect the spokes and can be used to block the ball. Most of the players wore helmets. 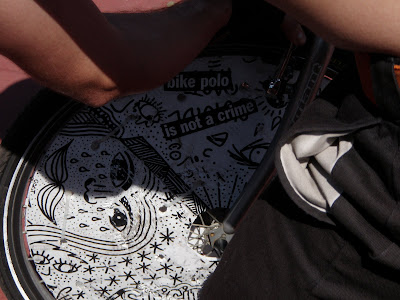 Many of the discs were quite creative. Some were not appropriate for Disney, but artistic, nonetheless. 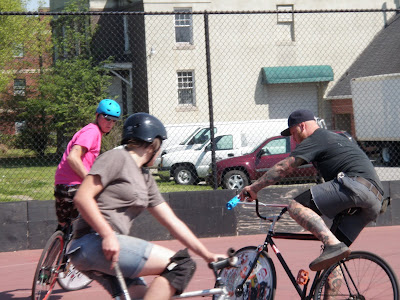 There were some good bike handling skills among the riders, and a lot of ink. The competition was spirited and good natured.
There were teams from all over the region, including Lawrence, Kansas and Tulsa, along with several other cities that I don't recall. Everybody was ready to play, so when the scheduled games took time out for lunch, pick-up games started immediately. 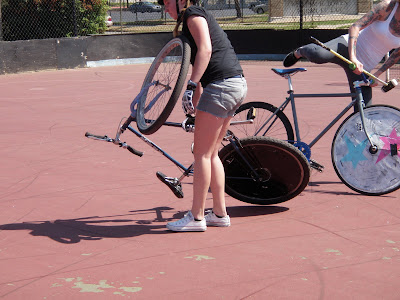 Things didn't always go as planned, but there were fewer crashes than I expected. The size of the court kept speeds pretty low and the riders, for the most part, were pretty good. 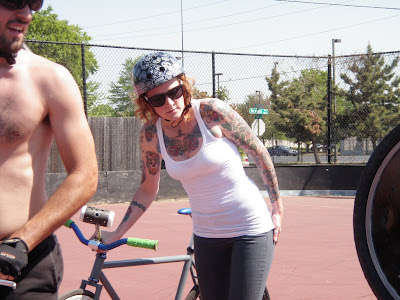 That wheel is done! There was a little beating on and cussin' at uncooperative components, but most of the bikes were just right for the job at hand.
It was a cordial crowd and I soon was holding a cold PBR and learning a few of the finer points of the game, compliments of new friend, Julie, who seemed to be being helpful to everyone, soon departing to take a few of the players to get lunch. Thanks for the hospitality and the information!
I like just about everything to do with bikes and bike polo is a great way to get some folks interested who otherwise might not ride, not to mention being a hell of a lot of fun for the many skilled players who were on the court today. It was fun to watch the games and hang out so I can see the sport growing, though I must admit that my age group was not fairly represented. I love seeing the bike options in Central Arkansas growing and you can add bike polo to the list.
The tournament continues on Sunday, so drop by and check it out. Bring a couple of friends and a bike, and you now have a team.


Here's a video from the LRBP site explaining how the spoke guards are made, if you're interested:

Thanks for covering us man! You are welcome to come play (as is anyone) Monday and Wednesday nights.Checka the blog to make sure we're on..usually 8pm, but sometimes earlier & we frequently meet at Vino's beforehand :)

I dropped by on Wednesday and got a little more gear insight. You guys are very gracious and I enjoyed the hospitality. I'm plotting to play.

Great! Sorry about not getting back to your email..things were probably getting crazy at that point.. :)