Bike Infrastructure Progress: Both Ends and Around the Edges

Progress continues on our growing system of bike infrastructure in Central Arkansas.
It appears that the long-awaited Rock Island Bridge project will be getting underway as money is rolling in in the form of a couple of million federal dollars that will help cover the Clinton Foundation's cost estimate shortfall. In addition, the City of North Little Rock plans to ante up another $750,000.00 to be used toward construction and the acquisition of two parcels of land near the foot of the north landing. The land acquisition will allow enhancement of the visual and practical approach to the bridge and allow the city a greater measure of control of development in the area.

On the other end of town, construction continues as footings are being dug and concrete piers poured for the Two Rivers Bridge. 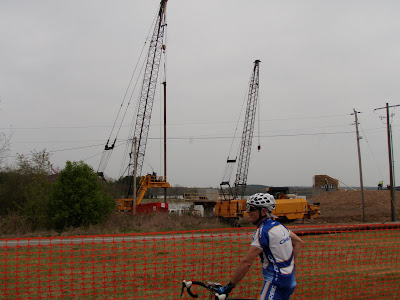 Steve Shepherd taking a look at progress on the Two Rivers Bridge. 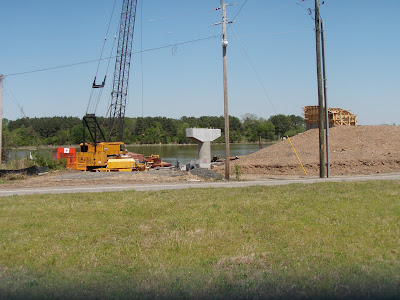 So near, yet, for the time being, still a long ride to Two Rivers Park.
Another important development that appears to be nearing fruition is North Little Rock's effort to acquire an unused railroad right-of-way that runs from the Levy area to the east side of Camp Robinson. This stretch of track was maintained for many years to serve the Camp Robinson depot, but a few years back the military department decided that they had no future use for the spur. The City has been working to make a deal for the property for conversion into a multiuse trail, which creates the possibility of a new northern corridor for bike commuters and recreationalists. In what will eventually be part of that route, work is underway on a bit of trail and some sidewalks at the intersection of Pike Ave. and 33rd Street, already making that stretch of Pike much safer for cyclists. The RR tracks cross Pike at an angle and there is no shoulder at all, making for a sketchy approach to the tracks if you are boxed in by traffic. 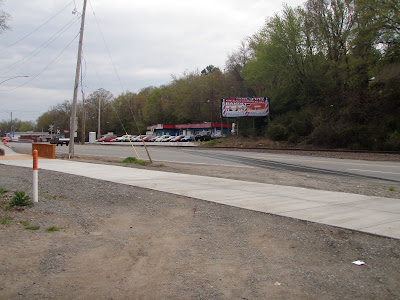 The new path already allows you to skip the tracks if you don't mind crossing a few feet of gravel, and I'm sure things will be finished up in this area soon. Many of us who live in Park Hill use this route to and from the River Trail via Fort Roots.
Our bike community just keeps getting better, but nothing happens without public support and the buy-in of civic leaders. Encourage your non-cycling friends (if you have any!) to get out and enjoy the trails and the BDB and express your support for cycling and pedestrian projects at every opportunity. This is the election season, so when those pesky folks interrupt your dinner or corner you at an event, ask them about their candidate's position on alternative transportation and energy policy. Issues like this only become important to politicians when they know it is important to voters. Tell them what's important to you.
Posted by JBar at 6:14 PM

It's all good work, but as a Little Rock expat cyclist who was riding on the NLR side on Sunday, we've got some work to do about culture.

For one, It's not safe to pass at high speed around Emerald Park, especially when it's posted don't because of blind curves. Even worse, don't take up the whole path making big passes then act like it's my fault I'm on my side of the trail when you look at me with a very snide look.

I realize that I'm a fat mid-20s Fred and you're probably a Cat 3 racer, Cat 2 at best, but at end of the day we're all in this together. Sorry to take over your fine blog on Central Arkansas bike stuff (I read it to stay up to date on happenings in the LR/NLR area for when I'm passing through and need to get a couple of hours of saddle time in) to rant about somebody likely you're not in the same crowd as (pretty sure he was wearing CARVE kit), but thought I'd throw that out there.

I'm glad to hear from a rider in their 20's. I had a recent conversation with a long-time Little Rock rider/racer bemoaning the difficulty of getting younger folks (by our geezer standards!) interested in riding. The community needs you, so bring your frinds! I appreciate your comments, and will add that we all deal with lapses in the judgement of others, both while riding and while driving our cars. We sometimes even make those errors ourselves, at which time about all we can do is mouth "sorry" and give a little wave.Such events can seem a little more personal on the bike, especially when accompanied by the "snide look", and I'm far less likely to deliver the therapeutic single-digit wave to a fellow rider, even a rude one.
Thanks for writing.

Road cycling has made me much more patient with people, so now instead of making a scene I tend to just roll on, unless they are making aggressive moves, which in Austin there is a direct correlation between the noise of your muffler or number of feet your truck is raised and the amount of assholery your bring to cyclists.

I try to get more and more of my friends into road riding. If I was back in LR, I'd probably have a better chance, especially with the Two Rivers bridge project, which should make for much better cycling for beginner/intermediate cyclists on the LR side. I look forward to it's completion like everyone else who puts two wheels down in Pulaski County.

anoncow,
Sorry for that one bad bannana that turns up from time to time, I am a racer and so are alot of my riding partners, we try to ride away from the river trail when riding "fast" and reserve the river trail for getting somewhere or social riding, the only time I ride fast on the trail is in the winter when it is dark and cold (it's only me and the deer) I am glad to hear your out there and I brag to people everyday about the amout of "new" riders showing up on the river trail when the weather gets nice. and btw the person who did that to you was more than likly a "wana bee"