The Tour is over and the results are in. Yeah, yeah, Froome won, but I'm talking about the JBarCycling MiniLeague!

I took a decidedly contrary position in selecting my team in that I took Contador as my GC hopeful (at least I didn't pick Andy Schleck!) and I passed on a phenomenal Peter Sagan. My man Mark Cavendish had to play second fiddle to Marcel Kittel as this year's top sprinter, while persistent break-away artist Thomas Voekler apparently left the race just after team photos. I'm still a big Cav fan and he'll stay on my teams, but little Tommy Voekler is dead to me, I tell you!
We had ten teams in the JBar Cycling Minileague and Bob Fegtly ran away with the win after hanging in the pack until the closing days!
As promised, I stand prepared for the payoff in the form of a 6-pack of a quality IPA.
I'll even be gracious enough to allow Bob his choice of brew so long as the brand name includes no reference to "light", "lite" or "ultra".
And there's more!!!
I will include as a special bonus one of these beautiful JBarCycling coffee mugs! 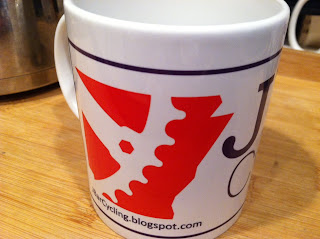 This is a JBar exclusive! No, this sumbitch is not "as seen on TV"! It is far too rare for those shysters. You can only get it for being a winner and only right here.
Congratulations Bob! Jim took second and my buddy Sam made a late surge to round out the podium. Chris Irons took the lantern rouge, so I should probably buy Ironman a beer for helping propel me up from DFL.
Thanks you everyone who played. Having a Velogames team really does add interest to the grand tours!
Vuelta, anyone?
Here are the final standings:

Nothing Has Changed  Pessimist 4120