New "No parking" signs have gone up on the Little Rock side of the BDB where park user have parallel parked along Rebsamen Park Road. Apparently, the signs were put in place by Pulaski County in response to complaints by Corps of Engineers employees at the dam. After the complaints resulted in the signs going up, additional complaints to the city about people parking within the new "no parking" zone resulted in tickets being issued. 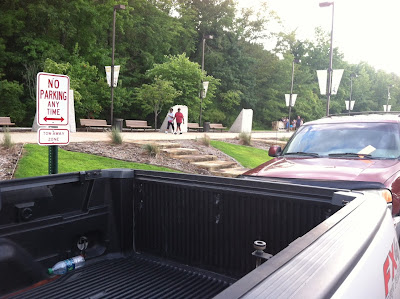 These signs were erected by the County at the request of the Corps. The property is federally owned and leased to the city, as I understand. 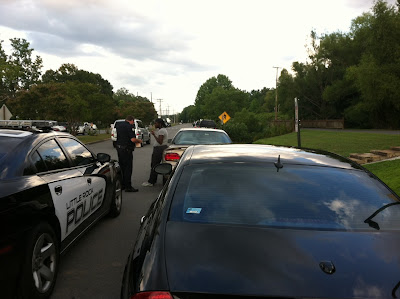 The Little Rock police officer was getting an earful, but was as gracious as he could be under the circumstances. He seemed a little puzzled by the change in policy, as was I, but he had a job to do.
There are a couple of Corps employees who are well-known to cyclists for their aggressive driving in the area. Apparently one of them honked at some cyclists who were in the road, and the cyclists took issue with him. A police report was filed and things went downhill from there. I think we've all been guilty of milling around in this area, so let's try to do our meeting and socializing out of the path of traffic.
I don't see how demanding elimination of the parking is anything but some small revenge from somebody who resents having to drive through a park to get to work, but that is simply my impression of the situation. There may well be other issues of which I am unaware.This is a no-win for BDB and trail users and for the City, so just be cool if confronted by impatient drivers in this heavily used area and expect to be ticketed if you ignore the signs.
Signs will go up directing overflow parking to Murray Park. No big deal for cyclists other than increased fear of break-ins in the more remote lot. Casual walkers and moms pushing strollers may not appreciate adding a mile to their routine, but we'll just have to deal with it.
Posted by JBar at 10:32 AM

we've all been guilty of milling around...
Can you expand on this, are you talking about standing in the middle of the street or on the side of the street? Thanks, and great blog.

I was referring to standing in the street, particularly near the port-a-potties and the crosswalk there. Many ride groups congregate there and it is a natural gathering point for folks who encounter friends at this intersection of trail and bridge. Some are guilty, at times, of blocking the road, as the only through traffic at peak times consists of a couple of guys at the lock. For most drivers, it is not a problem, as they are park users and, therefore, "they are us". It seems to be a big issue for a few Corps of Engineers employees at the lock and dam. I would suggest that if they passed through the area at the posted speed limit that they would seldon have to slow down for the 100 yards or so that makes up the parking lot area.

Thanks and enjoy your blog. I guess I don't understand agressive driving with children around and babies in strollers.

It appears to have had an impact on the crowd this weekend. Saturday morning it is usually bumper to bumper with cars parked on the side of the road and lots of people, this week the crowd seemed down. I was back on Sunday afternoon and again the crowd was down.

I've also noticed a drop in taril use in the area. I'm not sure that the parking situation is the cause, but it sure was not the weather! I expected wall-to-wall people with the unseasonably pleasant temps.

One of the issues that you did not mention was you cannot see pedestrians or cyclists entering the crosswalk with vehicles parked along side the street. As far as following the speed limit, does that go for cyclist as well? I also think it would be a great idea for cyclist to park at Murray Park and leave that parking lot for mom's with strollers and the elderly.

the issue i have is when you approach a group of cyclist that are riding 5 abreast taking up half the road and refuse to go single file in their designated bike lanes. then you have the congregation of cyclist that block the access road to the government facility and when asked to move out of the road they circle the vehicle and threaten to pull the driver out of the vehicle. it wouldnt have turned out the way it did if it were me in that vehicle.lets not forget why the Big Dam Bridge is there, because of the facility below it. i have even been passing through the area and had cyclist refuse to obey posted signs for crossings and pull straight out in front of my truck instead of at crossings, and then you add the danger it creates when you have cars parked on both sides of the road and as commented on before you add babies and strollers trying to peak out between vehicles. seems a no brainer. all this still isnt touching on the fact that gun shell casings, hyperdermic needles, rocks the size of softballs and various items are found strown about. i feel the right actions were taken to protect all involved.

Nice, bikers are nasty people, they wont move an give you the finger if you ask them to move, from old grandma's to mothers with babies. GET it Straight!

Enjoyed reading your blog. I agree that bikers are more often aggressive and they don't bother what is around them.
Gatwick meet and greet

cyclists should make it difficult for the rest of traffic to move on the roads. anyhow, nice to read the blog.Secure Secure Car Parking Gatwick

Cyclist usually do this to put their impact and show aggression on public. police should check these kind of activities. anyway gatwick valet parking parking services are providing their best secure service. just hit to it.

The aspects you told about cyclist are truly right. There aggression is sometimes just to impress the crowd or they haven't provided with proper parking lots . demanding elimination of the parking is anything but some small revenge from somebody. Well if the issue is parking then it must be solved. Secure parking at gatwick parking deals