This Tour promised to be predictably unpredictable and, if the opening stages are any indication, that will be the case! Rather than opening the three week Grand Tour with the traditional short prologue time trial, the 2013 Tour opened with its longest stage, a flat 130 mile stage that should have ended in a bunch sprint and a yellow jersey for one of the top speedsters. It is never a sure thing, but prognosticators had all but fitted the first yellow jersey on Manxman Mark Cavendish.

All of those predictions went to hell as a team bus, late to arrive at the finish, got stuck under the finish line banner and the peloton flew toward the line at high speeds. 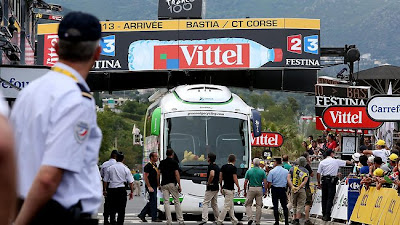 Not according to plan! The late-arriving Orica GreenEdge bus was waved under the finishing banner, only to become wedged in place.


With only minutes to act and racers near the 5k mark, race officials announced that finishing times would be taken 3k out, where timing cameras were in place. Unfortunately, the 3k mark was also at a traffic circle, which would have made for mayhem as sprinters piled in at 50MPH. Finally, the bus was moved and the finish was moved back to its original point.
Unfortunately, as riders frantically tried to deal with spotty information, a moving finish line, and a rare chance to wear the yellow jersey, a massive pile-up took sprinters Peter Sagan, Mark Cavendish, and Andre Greipel out of contention. German Marcel Kittel took the sprint and the yellow jersey. Kittel is a fine sprinter but would likely have been somewhere in the pack of "also rans" had the likes of Cav, Greiple, and Sagan been in the mix.

Stage 2 was alittle more true-to-form, but the party was crashed by Jan Bakelants (RadioShack Leopard), who held on the take the stage out of a late breakaway. I won't say the obscure Radio Shack rider's win was unexpected, but he was identified as teammate Markel Irizar as he took the win.

It's early, but I am DFL in my Fantasy League!

I counted on Cavendish to take the opening sprint and I don't really care for Peter Sagan, in spite of his substantial talent. Sagan took second in stage 2, winning the bunch sprint as Cavendish was dropped on one the 5 climbs on the stage. As a result, the teams in my league who have Sagan (all of them but me?) are kicking my ass, as I languish in last place. It's long way to Paris, so I will have opportunities for redemption, but in my current position I feel like I have double-flatted and thrown a chain during a neutral rollout.
Posted by JBar at 7:28 AM