Eye candy for hunters and lovers of wildlife, that is... 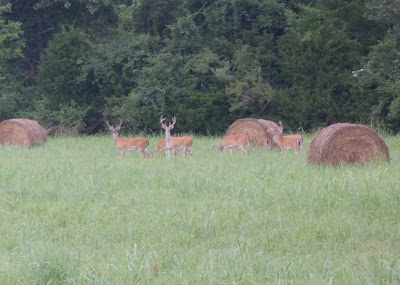 These boys were hanging out with some ladies and showing off impressive velvet covered racks. 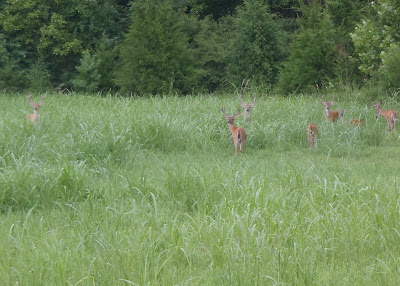 I whistled softly to get everybody's attention for this shot. I was 60-70 yards away, and the herd was alert to me but pretty settled in to their grazing. 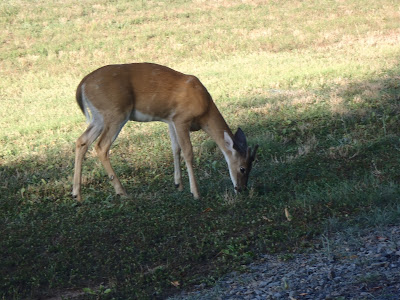 This little spike on the other side of the park was not alarmed at all by riders and walkers passing by. I was 12-15 feet away.
The open fields in Two Rivers Park are almost always alive with deer in the mornings and evenings, but last Sunday I was taken aback when I saw this group of deer. There were several nice bucks in the bunch sporting some nice racks. I seldom see bucks grazing around in the open, much less a gang of them.  Do these guys only fight for the does in the fall when they need a date to the football game? Somebody with more knowledge of deer bevavior can perhaps fill me in on what this brotherhood thing is all about.
On the north side of the river....
There are boats in the new marina even as construction continues. A small parking lot has been paved across from the riverfront property and there will be a crosswalk across the street/trail. The marina will add to the traffic in the area, as will a planned launch ramp near the skate park. 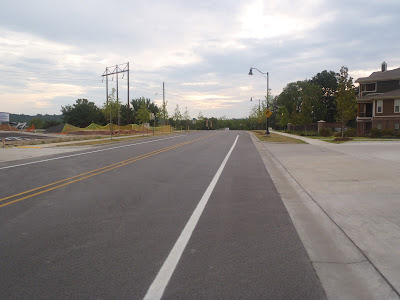 The new marina parking lot is to the left. This view is facing west on Rockwater Blvd. in front of the Rockwater Apartments.
There is a need for signage where Rockwater Blvd meets River Road and the River Trail. Drivers are not alerted to bike traffic entering the roadway. Recently planted trees along the parking lot will beautify the property but may limit visibility and rider safety.
I spoke to Bernadette Rhodes with the City and she is already in conversation with the traffic director to work toward improvements. 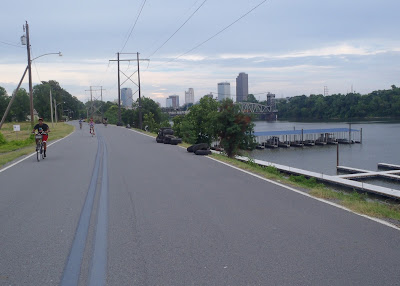 Some marina slips are already occupied and the long-ignored stretch of river bank is getting a clean-up. I counted roughly 100 tires that had been hauled up to the trail for disposal.
I spoke to a resident of the Rockwater complex who was walking his dog on the closed portion of River Road. He had recently moved here and when discussing the marina, he expressed his concern about the increased traffic in the area resulting from the marina development and a planned launch ramp near the skate park. He was obviously enjoying his riverfront home and the easy trail access.
﻿
Posted by JBar at 7:31 PM