My friend Sam recently invited me to join him at his cabin near Cozahome in the heart of the Ozark Mountain Buffalo River country. I had been wanting to see his place which is, to put it mildly, remote. Cozahome is a spot on the map, a few miles past the end of the pavement north of Harriet. If you're not familiar with Harriet, you may have been to Big Flat. Or, maybe not. In addition to the striking view of the Buffalo Valley a mile or so away, Sam had tempted me up with the promise of a bike ride on nearby Push Mountain Road. 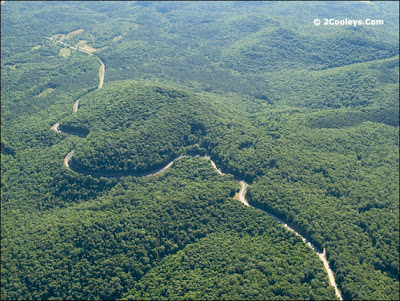 The "Dragon" of Push Mountain Road.
Photos respectfully poached from http://www.ozarkmtns.com/sylamore/photos/highway-341/pushmountainroad.asp
He had mentioned the ride a few times, with its great scenery, good pavement, nonexistent traffic, and screaming descents, and I had expressed an interest in giving it a try. It was the Memorial Day holiday weekend and I was out of excuses, so I headed up Friday evening, following a page and an half of detailed turn-by-turn directions to find Sam's hide-away. After a pleasant evening at the cabin, we got up early to prepare for our ride.
We headed to a point near the intersection of highway 14 and 341, or Push Mountain Road, to begin the 50 mile out-and-back. In addition to the fact that the cabin is miles from pavement, Highway 14 is pretty busy and has no shoulders, so we had elected to drive to our ride. It was a crisp beautiful morning and we saddled up a little after 8:00, getting a chilly start with an immediate descent of  half mile or so. Fun. Of course, in the Ozarks, nothing is flat and every descent is followed by a climb, so the chill was soon left behind as we climbed and dropped, going up, over and around a series of sweeping turns.
As it turns out, Push Mountain is famous among the motorcycle set, being mentioned in the same breath as the Dragon's Tail in North Carolina as a "must do" ride. Harley-Davidsons throb through turn after switchback turn and sport bikes scrape metal as they test the limits of bikes and skills. Almost very conversation with local folks brought a mention of fatal crashes and helicopter evacs of those whose ambition outweighed their abilities. A Google search finds stories of 120mph runs with hearts pounding and sparks flying.
The headliner of the ride, of course, is Push Mountain itself. We rode from south to north, so we got to enjoy the nearly 2-mile descent about 17 miles into the ride on the way out, and it was as sweet as advertised! 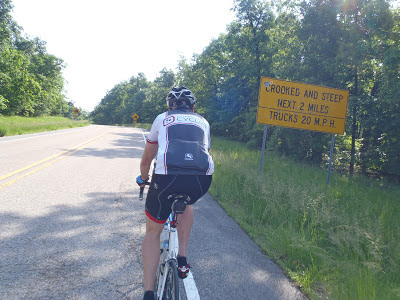 This is a happy place. Depending on direction, you're either starting the descent or finishing the climb of Push Mountain.

Good clean asphalt, almost no traffic, no driveways to belch gravel onto the road, and sweeping turns rideable at speed. We did not approach crotch-rocket velocity, but we rode much of it somewhere north of 40 mph, with my top speed registering 44MPH. While we did touch the brakes a time or two, more familiarity with the road would make that unnecessary for confident descenders due to the geometry of the turns and the good pavement. The descent of the Push Mountain Dragon, as the motorcycle crowd calls it, took mere minutes and left us smiling. An additional 5-6 miles of riding rolling hills brought us to another long descent down to the White River at a point south of Mountain Home. 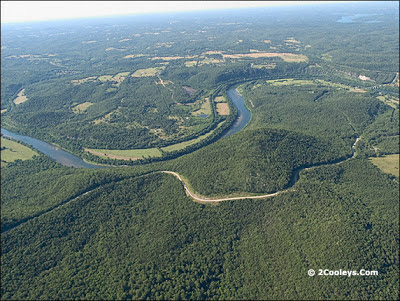 We had done a lot of climbing during the "out" leg of the ride, but we had also started high above the river valley so we knew what lay in store.  The elevation at our start point was a little over 1100 feet, while the elevation at the White River is about 380 feet. In between, elevations range up to around 1300 feet. The 50-mile ride came packed with over 4000 feet of climbing.
Sam compared the the experience to taking out a payday loan at the Gravity Bank and Trust.  The exhilarating descents were comparable to the immediate gratification that comes with getting a little easy money to buy some crack and a 30-pack, and maybe make a payment on the flat panel TV from the rent-to-own. It makes for a good weekend but the payback is long and painful. We thought we were being very clever amusing ourselves with the payday loan analogy as we groaned and creaked up the miles of climbs on the way back to the truck. I thought that the groans and creaks were coming from Sam and me, but it turned out just to be my seatpost.
This is a fantastic route and I appreciated the opportunity to ride this Ozarks jewel. The absence of traffic on a perfect holiday weekend was remarkable. It is well worth making a road trip and would be a fine addition to a Buffalo River weekend.
Posted by JBar at 9:05 AM

Hi, nice blog… Thanks for share. You can also use the alternative for this purpose. You just need to click on Car title loans to find more about this topic.

Good information if you need payday loans San Diego then click on it.

Such a nice blog.
Cash for gift cards

The blog is good enough, keep up writing such type of posts.wwwpaydayloansnorthcarolinalocationscom

Guess what? This is exactly what big companies are paying me for. They need to know what their average customer needs and wants. So large companies pay $1,000,000's of dollars per month to the average person. In return, the average person, like me, participates in surveys and gives them their opinion.

Hello Everybody,
My name is Mrs Sharon Sim. I live in Singapore and i am a happy woman today? and i told my self that any lender that rescue my family from our poor situation, i will refer any person that is looking for loan to him, he gave me happiness to me and my family, i was in need of a loan of S$250,000.00 to start my life all over as i am a single mother with 3 kids I met this honest and GOD fearing man loan lender that help me with a loan of S$250,000.00 SG. Dollar, he is a GOD fearing man, if you are in need of loan and you will pay back the loan please contact him tell him that is Mrs Sharon, that refer you to him. contact Dr Purva Pius,via email:(urgentloan22@gmail.com) Thank you.