On Pit Vipers and The Peacock

Ophidiophobia is the fear of snakes. While I'm not crazy about them, I did grow up with an older neighbor who loved to catch snakes so my Grandaddy Barton made me a small wood and screen box in which to house my ever changing collections of worm snakes, ringnecks, mud snakes and the occasional hognose snake or speckled king snake. Hognose snakes and king snakes were generally too big for the box, so they were brought home to show off and soon released.  One of my first discipline issues at Park Hill Elementary occurred when I was busted for dealing pet snakes to my classmates. I had made about $3.00, a princely sum for a poor kid in the early 60's, before the man came down on me and made me refund my bounty. I'm still somewhat fascinated by the legless critters, but have been known to dispatch a fat cottonmouth found poaching in my pond.

The Beauty and The Beast
The terrain along the River Trail is ideal habitat for several species of venomous snakes, and I can't resist stopping to photograph outstanding specimens. I usually nudge them off the pavement, but sometimes the cottonmouths are resistant to this kind of prodding and I don't push the matter. Here are a couple of recently spotted trail bosses. 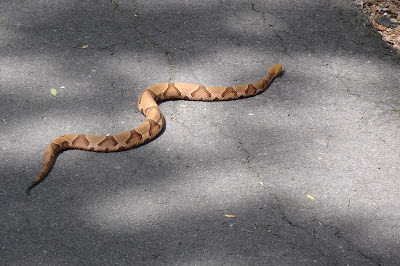 This copperhead was on the trail near the entry to the Emerald Park switchbacks. He was a good 4 feet long and about as big a copperhead as you'll see. Though far from cuddly, most passers by were struck by his beauty. 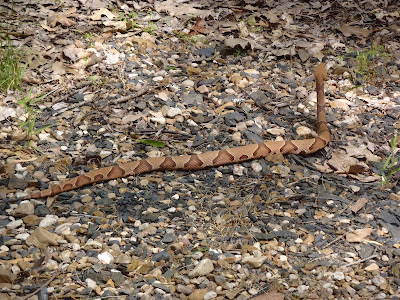 With their superb camouflage, most encounters with the shy copperhead occur when they are stepped on by unsuspecting walkers.Once spotted, he is intimidating enough even without the raised and flattened head. This guy kept easing back to the warmth of the asphalt after being encouraged to the woods. The beast. There is nothing attractive about this cottonmouth, though his marking are more distinct than many you will see. These guys can be aggressive and territorial.

The Softer Side: Big Bird
A couple of weeks ago, shortly after we had arrived at our cabin on the Little Red River, Diane claimed to have seen what she identified as a pair of peacocks, peafowl to be more accurate. She had even snapped a photo with he iPhone to make her case. Well, the photo showed two blurry images that could have been large birds or, just as easily, medium azaleas. The photo quality was reminiscent of a Bigfoot special and I was incredulous. Turkeys perhaps, but peacocks? Unlikely. We did prowl around the neighboring houses to no avail. Well, Diane got her reprieve when I got an e-mail from a neighbor last Saturday saying, "Diane is not crazy. There are two peacocks on our deck." Mike the neighbor even got a blurry photo of the peahen bolting after being startled by their dog, Danial the spaniel. Later in the morning, Diane spotted the cock perched in a tree directly behind out house. 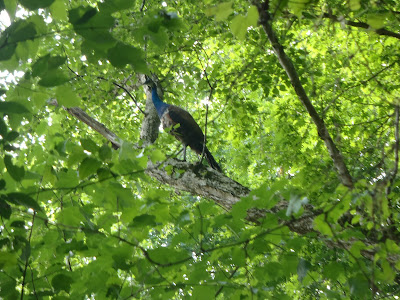 This is not an every day sight in Cleburne County.

We're assuming that someone in the area got the peafowl as pets or for pest control. They are also known to be obnoxiously loud and may be used as intruder alarms. They are omnivores and will eat anything from seeds to insects and, yes, snakes.